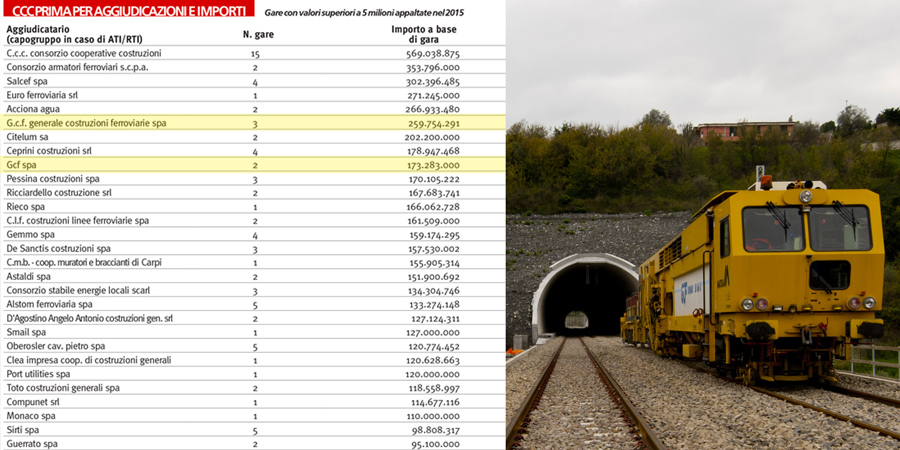 The railway superstructure plays a leading role in economic recovery

With 1,556 million euros of funds made available, the Railway Superstructure segment - and railway construction companies, with GCF in the forefront - confirm their role in Italy as protagonists of the recovery against an economic scenario - even in the construction sector - still characterised by significant uncertainty.
This is confirmed by the first edition of the rankings that "Edilizia e Territorio" - the weekly analysis of the sector by "Il Sole 24 ore" - has compiled as regards major Italian tender contracts in 2015 in the construction sector based on data collected by Cresme Services Europe.

the rankings of superstructure companies

As regards railway superstructure work, significant input arrived in 2015 from the major programme finalised by RFI (Italian Railways) for renewal and track maintenance: 13 contracts worth more than one and a half billion euros involving companies that, in relation to their fields of specialization, are included in RFI’s internal selective qualification system.

"The upward trend in the railway superstructure field - said Edoardo Rossi, President of GCF - seems to be confirmed by figures for the first two months 2016. RFI is playing a strong propositional role by increasing the number of projects (54 tenders, equal to +285%) and the resources available: 299 million euros, equal to +57%. This is undoubtedly a good sign for the entire construction sector that, as emphasized by Cresme, is showing albeit still very diversified signs of improvement and, as regards the construction field in particular, lower than those seen on a European scale”.