GCF and railway superstructures: action for the environment 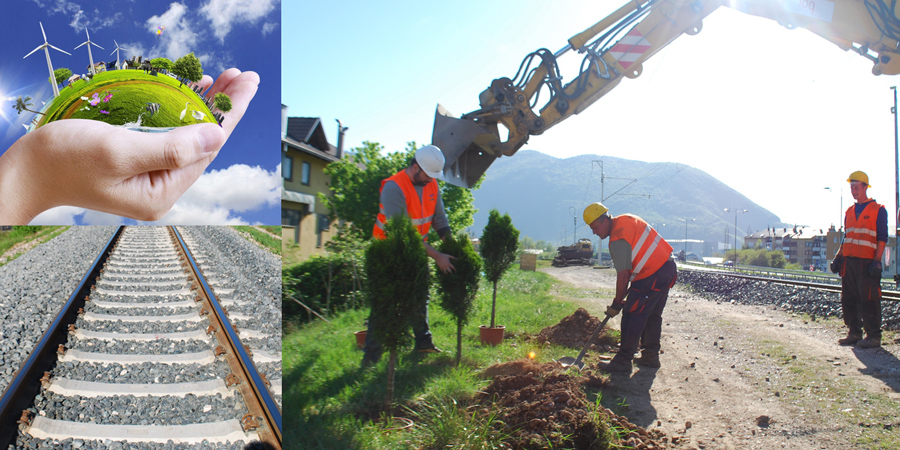 Bosnia, railway superstructure that is efficient and ... green

Rail transport is eco-friendly and helps safeguard the environment. A mixed Italian-Bosnian team of GCF – Generale Costruzioni Ferroviarie SpA employees sought to highlight this aspect on the occasion of Earth Day by planting a number of trees along a section of the Sarajevo-Bradina railway line.

This meaningful action and strong symbolic gesture helped GCF emphasise how choosing rail transport will have an important impact on reducing negative effects on the environment.

The celebration of Earth Day, launched by the United Nations in 1970, draws attention to the need to preserve the planet's natural resources by reducing pollutant emissions and land consumption while also protecting ecosystems. It is held every year one month and two days after the spring equinox and currently involves 175 countries. In 2020, on the occasion of the 50th anniversary, 7.8 billion trees are expected to be planted: an important contribution in the fight against climate change and the preservation of clean air.

GCF has been involved since 2015 in Bosnia in the railway reconstruction project on the Sarajevo-Bradina line along Corridor V linking the capital with Mostar. This is a particularly important railway superstructure project that envisages not only the complete replacement of rails, sleepers and points but also the complete rebuilding of the Contact Line, the renovation of bridges and underpasses, as well as civil and infrastructure works in the Ivan Tunnel. The outcome will be the coming consignment of an efficient, low-impact, fast and highly practical railway line: what better location for celebrating the contribution of railways to the conservation of the planet?

According to the International Union of Railways (UIC), rail transport is one of the most efficient and environment-friendly ways for people and goods to move around: it also has enormous potential for reducing the impact of gases that are harmful to the environment and improving people’s quality of life – and in the next 5 years, the railway sector will further reduce emissions by 30%.
Thanks to lower resistance to movement between wheels and rails, trains now consume less energy than any other means of transport: carrying one person over a distance of 1 km consumes three times less energy than aeroplanes and six times less than cars.
It is estimated that, in developed countries, redirecting 5% of freight from road to rail has brought about a saving of one-sixth of the total quantity of imported oil.
And all the more, land saving is another important feature of railways. A double track railway line occupies a space of only 15 metres: road transport of goods and passengers to an equivalent extent would require a 16-lane motorway 122 metres wide!

As the completion of works on the Sarajevo-Bradina railway line section approaches, the symbolic act of planting new trees along the route wanted to draw attention to the fact that rail transport is an option within reach of everyone, an environment-friendly choice and a small yet important gesture supporting the fight against pollution.