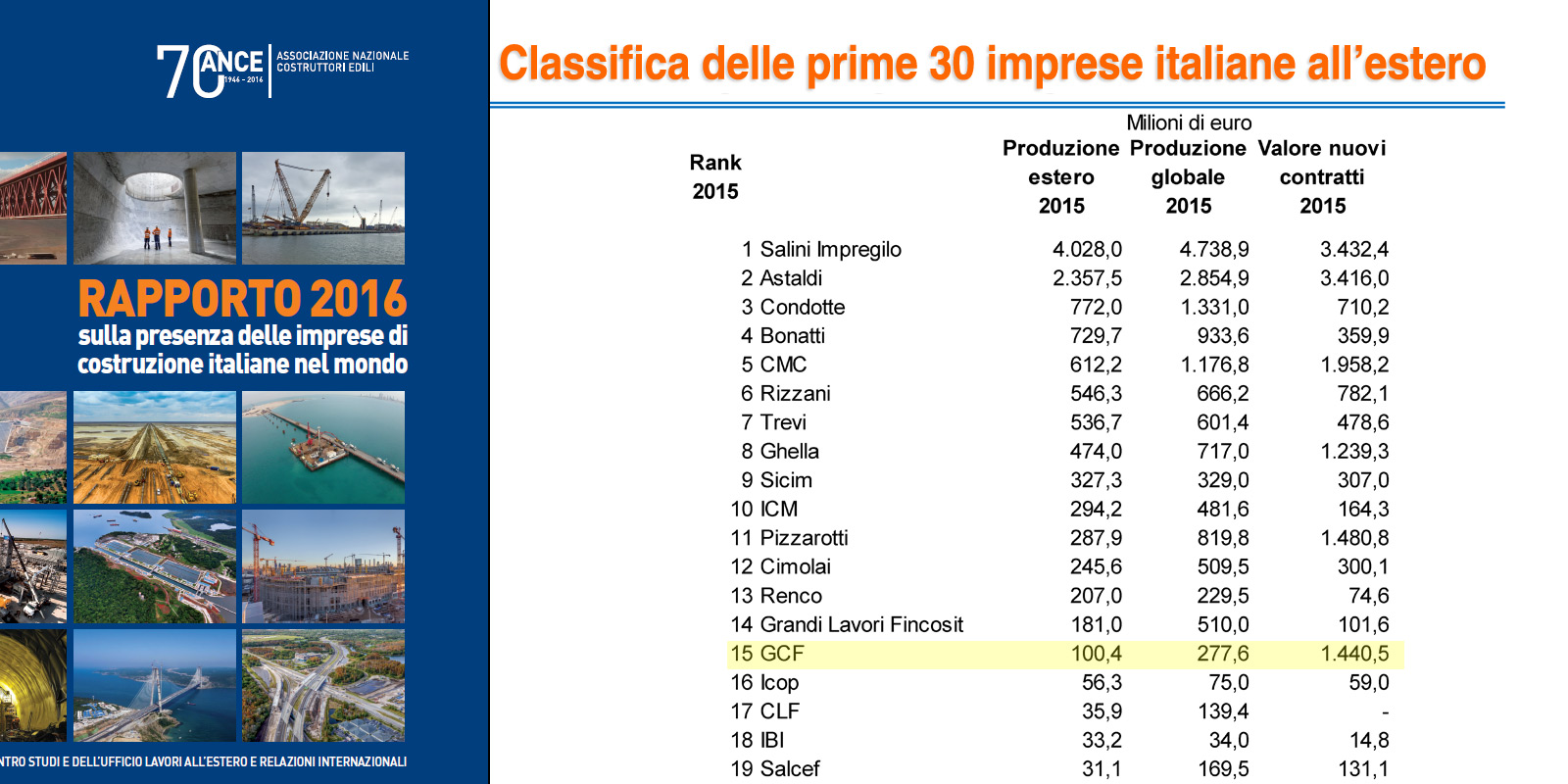 The Italian construction system continues to develop abroad. Railway construction is the pride of Made in Italy on an international scale.
This was highlighted by the Ance 2016 Report presented on 4 October at the Farnesina (Italian Foreign Office), through analysis of market penetration around the world by the top construction companies.
Data for 38 construction companies is impressive. For the eleventh consecutive year, these companies improved turnover from outside Italy: 12 billion euros in 2015 - an increase of 14.5% over the previous year and 286% compared to 2004.

A closer look at the various sectors reveals that the lion's share - with one-quarter of total orders - is once again taken by the railway sector as the driving force behind the entire construction sector, followed by roadworks (22%), hydraulics (15%) and construction (8%).

The success of the railway construction

The President of Generale Costruzioni Ferroviarie, Edoardo Rossi, said: "The result achieved by GCF - coming fifteenth in the overall ANCE general rankings and top of the list for companies operating exclusively in the railway construction sector - is unquestionably the outcome of the massive investments we have and continue to implement in machinery and advanced technologies. The European and non-EU countries where we operate fully acknowledge our experience, expertise and technological-economic competitiveness. In many countries, all the more, our construction sites are also a major driving force behind development for employment and local companies. These factors have helped us consolidate our presence on important foreign markets, such as France, and penetrate new ones, such as Denmark or Switzerland.”

The contribution made by Italian companies to local development was also emphasised by the Minister of Foreign Affairs, Paolo Gentiloni: "One of the elements ensuring that Italian construction companies are held in such high regard abroad is that they do not merely propose turnkey packages and then disappear but, on the contrary, promote local personnel and businesses, thereby contributing to the expansion of their know-how."

Ance Vice President Giandomenico Ghella remarked how globalisation of Italian companies abroad has by now become "systemic": "Our construction companies, he pointed out, are increasingly competitive and technological and capable of penetrating even the most advanced markets, as shown by consolidation in OECD countries.”

The impact of the construction market on GDP

Ghella also pointed out that the efforts abroad by the Top Ten Italian companies have a very strong impact on national GDP.
As confirmed by a study conducted by Cresme, an order won abroad worth 1 billion euros generates a direct impact on Italian GDP of 345 million euros, considering salaries for human resources, expenditure to support sites, gross profit on projects, services and acquisition of input from Italian companies.

By applying this multiplier to 12 billion euros in revenues generated abroad by Italian companies, it emerges that the total direct impact on Italian GDP in 2015 was approximately 4.1 billion euros, of which more than 1 billion euros from railway construction enterprises.

The most significant ANCE data for 2016