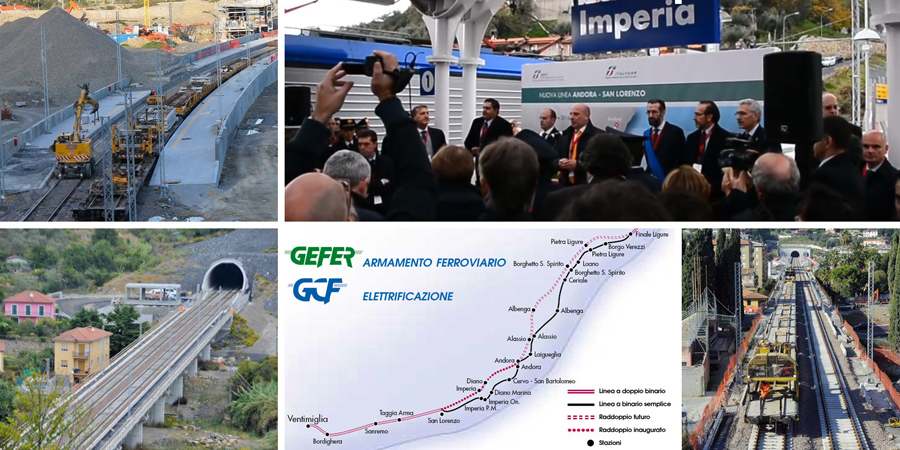 “An extremely important project for Liguria as a whole. It all seemed virtually impossible only one year ago but it’s already operative today."
Politicians and authorities in the Liguria Region joined huge crowds to welcome the arrival in Imperia on the train which officially inaugurated the new Andora-San Lorenzo double track railway line.

With railway superstructures by Gefer and electric traction by GCF, the new route is an integral part of Genoa-Savona-Ventimiglia development projects and joins the Rossi Group’s curriculum of completed railway projects.

Implemented as an up-line variant in relation to the existing coastal line, it is almost 19 km long, with 16 km of tunnels - seven in a single barrel-double track tunnel - representing 86% of the section and an additional challenge for the Gefer superstructure site. There are also many viaducts (8% of the section), which had to be built in order to pass over the innumerable streams in the area.

The option for an internal route further away from the coast and therefore less exposed to erosion and hydro-geological risks also required the creation of three new stations (Andora, Diano and Imperia) that all conform to the highest safety, accessibility and usability standards complete with arrival/departure monitors and indicator boards on platforms and underpasses, tactile routes and maps for people with impaired vision, ramps and lifts for people with mobility difficulties, 55 cm high pavements from the tack level to facilitate getting on and off trains convoys, and interchange areas with local public transport.

The new Andora-San Lorenzo line its generally straight and has no level crossings. It will reduce travel times by up to 15 minutes and increase the capacity of rail traffic thanks to significantly more trains serving the three stations: up from 54 to 62 for Imperia, from 46 to 56 for Diano and 22 to 30 for Andora.

The line will be managed and controlled using the latest technology from the Geno Teglia Main Control Centre. Speed along this section (up from 140 at present to 180 km/h) was tested during the night 13-14 December by AIACE, RFI’s first high speed diagnostic train.

The overall investment on the new railway infrastructure came to 582 million euros. As a result, double track sections on the Genoa-Savona-Ventimiglia increased from 120 km over the total length of 147 km.

Newspaper "Il Secolo XIX" made a video of the maiden trip over the new track on the "Vivalto” regional train.