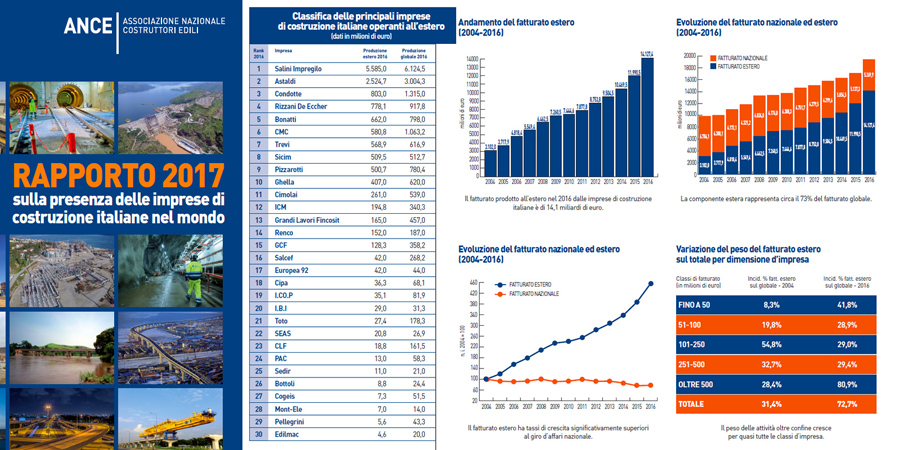 "The successes that our companies have achieved abroad are something for the country to be proud of". The President of ANCE (the Italian Association of Private Construction Contractors), Giuliano Campana, had this to say when commenting on the 2017 Report on the presence of construction companies abroad, presented to the Ministry of Foreign Affairs a few days ago.
Once again, GCF is ranked 15th among the Top 30: a significant result since it is the first of the companies that operate exclusively in the railway construction industry.

The 2017 Report includes a number of interesting points and underlines how, for the 12th year running, the presence abroad of the Italian construction system has been strengthened.
Compared with an "apathetic" domestic market, from 2001 to 2016 the construction companies' average annual turnover abroad has increased by 13.5%, substantially higher than the global increase in turnover: + 5.8% annual average.
As a whole, the 43 companies that took part in the Report have achieved a foreign turnover of over 14 billion with an increase over the previous year of 17.8%..

The lion's share - for the first year since 2004 - goes to orders for road and motorway infrastructures with 131 worksites worth 20 billion euros (21.9% of the work portfolio) followed by hydraulic works with 15 billion euros worth of works (16.9% of the total).
"If we look closely", said the Chairman of GCF, Edoardo Rossi, "the railway industry continues to account for over 16.1% and, together with the underground railway construction industry which amounts to 15.8% of the portfolio, is a key sector: overall, it accounts for 31.9% of Made in Italy overseas and we are very proud to be in the frontline and represent this sector which is vital to the national economy."

According to the 2017 Report, the increase recorded in 2016 in new orders is completely unprecedented: 244 new orders worth 20.8 billion: + 20.7% up on 2015.
The total value of projects overseas has reached 90.8 billion in 2016 with a total of 686 orders.
Italian construction companies account for 72% of total production overseas. This average covers a fairly wide range in the order of importance that the overseas share has on the overall turnover: it goes from 30% for medium-sized companies (with a turnover of from 251 to 500 million), to 80.9% (90% in three cases) for companies with a turnover of over 500 million.

For the vice chairman of ANCE, Giandomenico Ghella, ''the Italian construction companies with their great professionalism and technological expertise are demonstrating that they have the quality and the skill to make their mark in the highly complex, competitive markets in G20 and OCSE countries. Here the growth of Made in Italy is even more significant because it contrasts sharply with the gradual reduction in the foreign turnover of construction companies in the rest of the world."