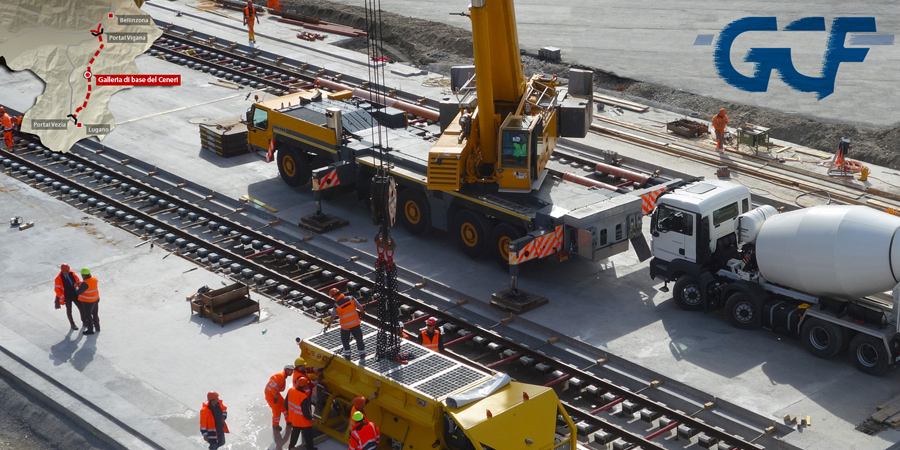 Three months of strenuous preliminary tests. At the Camorino worksite, Generale Costruzioni Ferroviarie has begun the preliminary stages of work on the Ceneri Base Tunnel railway track.
The preliminary tests, which are common practice on all sites, are particularly important here not only due to the strategic importance of the  Ceneri tunnel in Europe but, above all, because of the numerous innovations designed and developed by GCF for the AlpTransit site.

Located between Bellinzona and Lugano and 15.4 kilometres long, the Ceneri twin-bore tunnel is ranked 24th in the world ranking of railway tunnels. After the Gotthard Base Tunnel which stretches for 57 kilometres making it the longest in the world, the Ceneri tunnel is the second largest railway project in Switzerland. With its two elder sisters, the Gotthard and Zimmerberg tunnels, the Ceneri tunnel will complete the New Railway Link through the Alps (NRLA): the continuous railway line that links Northern and Southern Europe by crossing the Alps with a completely flat High Speed/High Capacity line.

To take on the responsibility it was given when it was awarded the Ceneri tunnel railway technology worksite, GCF has mobilised its best forces. "To complete this project, we will use the experience we have gained in over 60 years' work in the railway track industry", said GCF's President Edoardo Rossi, "and we will also fine tune new, innovative solutions that are perfectly in line with the project's objectives."

Monte Ceneri: an innovative worksite for the project of the century

It is a huge challenge: 30 kilometres of railway line on concrete and one tunnel, all in one year.
To do this in the best possible way, GCF railway technology will rely on its experience and capacity for innovation in technology and methodology, machinery and equipment, organisation and logistics, and operating procedures.

Every aspect of the Ceneri project has been analysed, assessed and planned down to the tiniest detail in the design stages. "Now it is time for the tests", the Site Director, Alessandro Macetti, explained, "and the first systematic tests on the planned methods, machines used and procedures that will be adopted for the base tunnel railway track."

For the last 30 days at Camorino, in the worksite area near the entrance to the tunnel, the various work phases are being simulated out in the open on a 50-metre section that replicates the tunnel platforms.
The schedule in this first test stage is very demanding. Engineers and technicians working for the client, AlpTransit, have carefully checked and assessed each of the procedures that the GCF units have simulated: thirty in all from dry positioning of the track to delivery of the High Speed line.

Raffaele Forcella, Operations Manager, had this to say: "It is a logical continuation of the tests already carried out at Arma di Taggia, a few weeks ago, for laying the LVT (Low Vibration Track) blocks. There it was a question of checking that the "Meccanica" track-laying train which our Gefer workshop had modified to handle blocks instead of sleepers was working properly. Here, we have to test all the other operations preceding and following this with special attention paid to casting the concrete."

The careful checks performed to date have already approved the procedures and actions involved in the various stages of the project: the approximate planimetric and altimetric positioning of the track from raising the track with a rail positioning machine to fixing the temporary track supports and precision positioning of the LVT blocks; the preparations for drainage and casting with treatment of the bed and platforms and formwork and the positioning of sumps and reinforcing structures; the precise planimetric and altimetric positioning of the track with passing of the Topographic Wagon, final fixing and tests.
As Forcella explained, "the track system with its special LVT blocks dictates the need to adopt special methods and use machines that have been designed or adapted to the purpose, both for laying these special "sleepers" as well as for transport inside the tunnel and casting the concrete. For this reason, the central test days are devoted to casting concrete with vibration and distribution of the concrete, smoothing, cleaning and finishing up until post-treatment."

Nothing has been overlooked in the tests: teamwork, safety procedures, quality of the structures and, obviously, the performance of the special machines designed and built for this particular worksite such as the MX08 Plant, a brand new 16-wheel wagon for mixing and casting the concrete: together with the gantry wagon for transporting the LVT blocks and the "Meccanica" track-laying train - which has also been specially redeveloped - it will be an important part of the GCF fleet of machinery in action on the Ceneri Tunnel.

Once the first "exam" stage has been passed, the tunnel tests will continue throughout May and June. Then, once the preliminary checks have been performed, the preliminary tests passed and the site work which began in January finished, GCF will be ready to start the Monte Ceneri Base Tunnel railway track work in July as scheduled: 12 months' work in the tunnel to give Switzerland its direct North-South line. 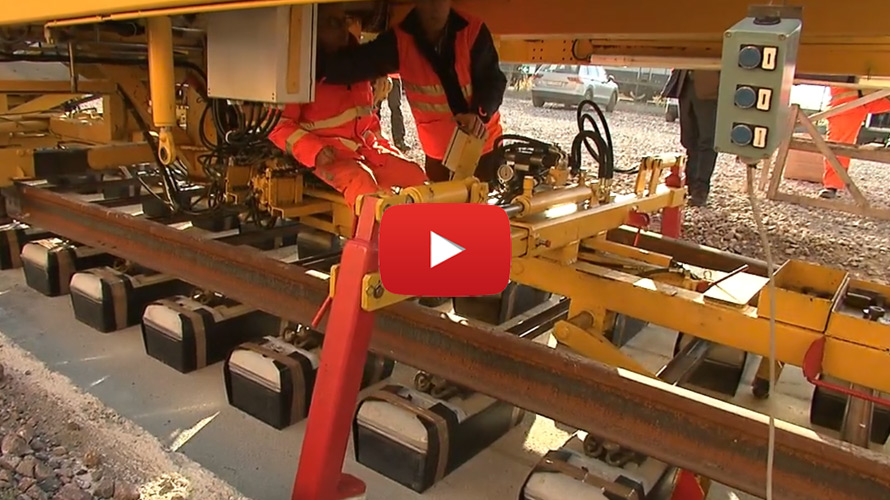 The NRLA is considered the "project of the century" because of the importance of the works involved, the considerable investment made and the importance of the strategic aims assigned to it both on a European economic development and environmental protection and sustainable mobility level.

For more information on the GCF sites at Monte Ceneri