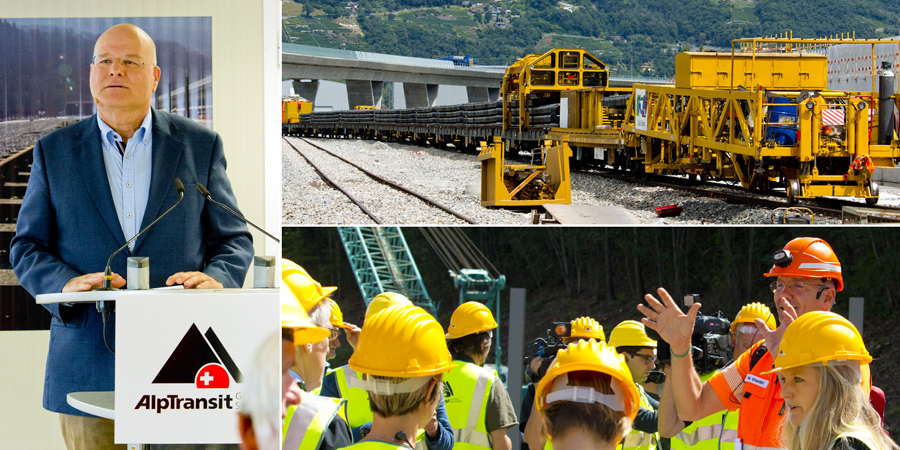 Work on Monte Ceneri Base Tunnel track officially gets under way.

With a press conference and visit to the Camorino site on Thursday 27 July, AlpTransit Gotthard AG formally began the first stage of the Railway Technology batches that have been assigned to Generale Costruzioni Ferroviarie.
A true "handing-over ceremony" took place over a week ago when the Condotte-Cossi Group delivered the Monte Ceneri Tunnel to its client, Alp Transit, the company that holds a 100% stake in the Swiss Federal Railways.

Paolo Vicentini, an engineer who is AlpTransit Project Manager and Railway Technical Development Manager of the Ceneri project, had this to say: "This is the start of a new challenge that involves installing the railway technology that will allow us to complete the entire NRLA project. We are perfectly in line with the estimates as far as both the schedule and budget are concerned: by the end of the project, we may well have used fewer resources that those allocated by the Swiss Confederation. This is something that AlpTransit has to be proud of and is a tribute to the quality of the work that the companies have provided and demonstrates not only that they have extensive experience, but can also be highly competitive and reliable."

After months of planning, research and development of innovative solutions, site work, training of personnel, purchasing of special machinery and equipment, GCF has now reached the second stage, the one in which it goes out onto the field and transforms strategies into actions and projects into works.

"Now it's our turn", Edoardo Rossi, President of GCF, said, "to give the best of our experience and our maximum commitment to delivering the railway line that will complete the New Railway Link through the Alps to Switzerland. It is a project that the Swiss approved in a popular referendum in the 1990s and one in which they have high hopes, not only for the effect it will have on transport and commerce but, above all, in my opinion, for the drastic reduction in pollution. This is why we are proud to be playing our part."

The challenges of Monte Ceneri

Almost 30 kilometres of railway track on concrete as well as a dozen kilometres of "traditional" track on ballast for the service branch lines and the above-ground sections on the two viaducts and the branch line that connects the tunnel to Lugano-Locarno. GCF's next 12 months at Monte Cenere are going to be very busy.

The work will be highly complex due to the logistic difficulties of working on a single track in the tunnel, the extremely limited space, the extreme climatic conditions with temperatures and humidity levels that are a constant challenge and the strict criteria that laying a high-speed line must comply with given that the tolerance margins are virtually nil.

"Nothing is left to chance", the Site Director, Alessandro Macetti, explained, "and over the past months, new innovative solutions have been implemented and tested to tackle the many distinctive features and problems that are an intrinsic part of the railway work in the tunnel in general, and the Monte Ceneri twin-bore tunnel in particular". Operating methods and techniques have been developed, organisational models and procedures assessed and machinery and equipment designed and built to provide the operational flexibility and excellent performance that a work like the Ceneri project demands."

Over the last 10 months, from when work began on the Camorino site, the team of GCF engineers and technicians has been adding the final refinements which include training the personnel who, in the double shifts scheduled, will work in the tunnel, each one of them involved in a specific highly specialised task. "All the operations", Raffaele Forcella, Operations Manager explained, "have been simulated and tested over the last three months out in the open on a 50-metre section of track and then with tests in the tunnel. Both men and machines are ready and capable of guaranteeing maximum efficiency."

This has brought the relationship between man and machine and team spirit to an excellent level and will guarantee high quality work from the very first metre.

"Once the railway track work on the two bores of the Ceneri Base Tunnel has been completed", said the design engineer, Eleonora Gasperini, "work on the Technology Batch will follow within 12 months and will complete the base tunnel by equipping it with all the necessary utilities: contact line, power, telecommunications and radio, fire protection and ventilation."
The Ceneri Base Tunnel is due to be opened in 2020.

The figures for the Ceneri tunnel railway work 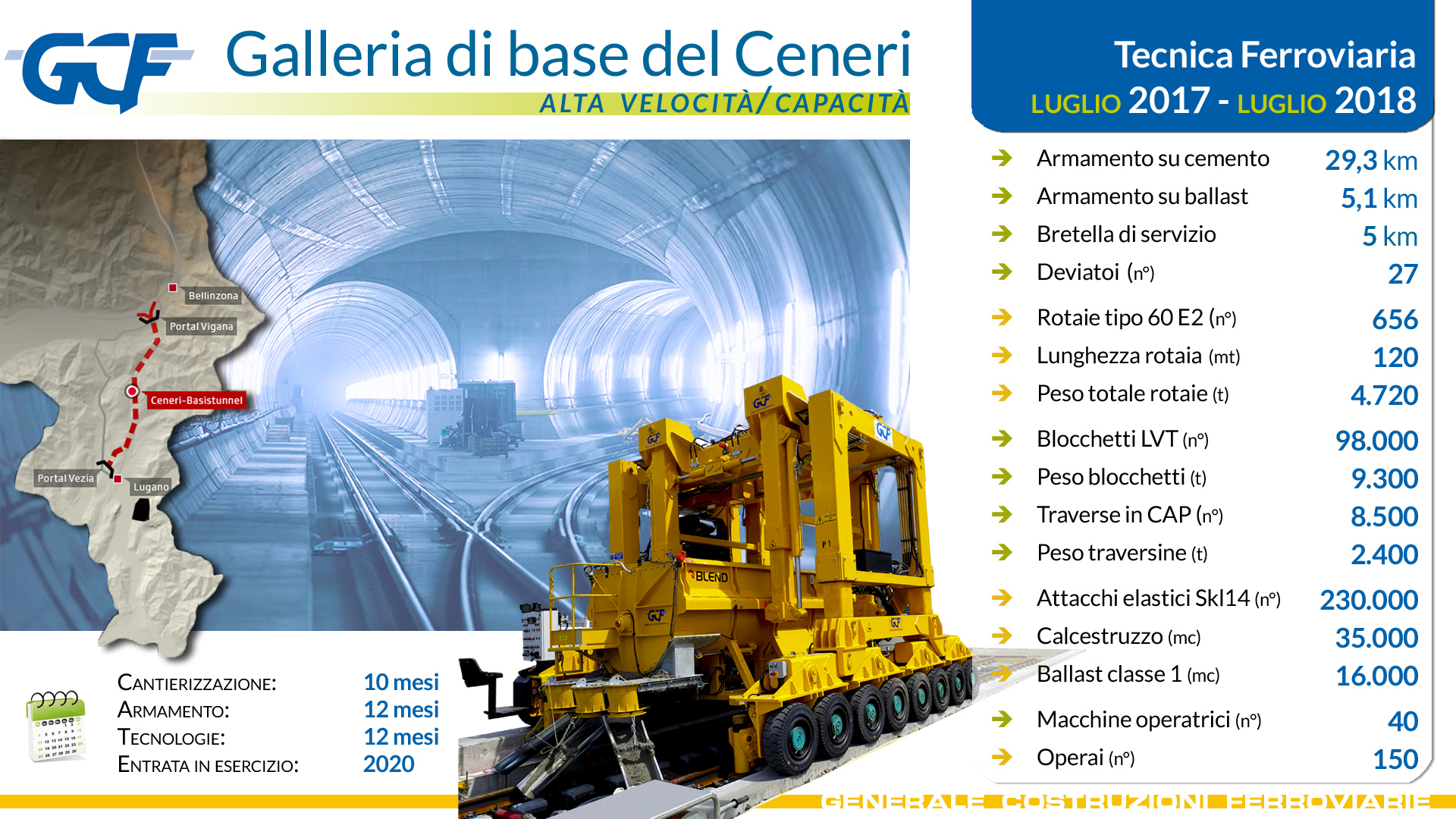