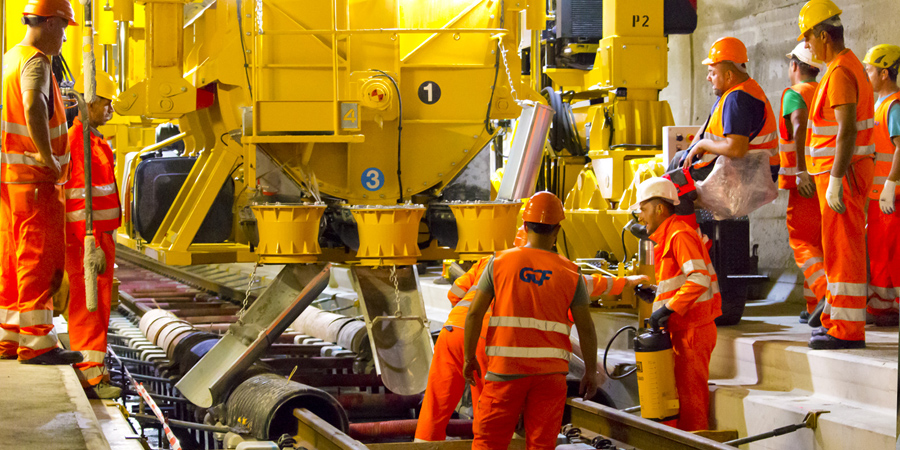 Ditecfer gives an award to the MX08 concrete mixer used by GCF at the Monte Ceneri Tunnel.

A prestigious award goes to the MX08, one of the innovative machines used by GCF on the railway track in the Monte Ceneri Base Tunnel.
The award is given as part of the Ditecfer Railway Contest 2017, an event promoted by the Railway Technological District of Tuscany which, for the third year running, was open to all companies based in Italy who have developed their innovations in the railway sector in our country.

The aim of the Contest was to select the 3 best innovations based on the following criteria: level of innovation with regard to the state of the art; financial benefit for customers; competitive advantage for the company taking part; positive effects in terms of social and competitive challenges in the sector; development in collaboration with other companies and/or bodies.

For 2017 the second prize was awarded to the special MX08 concrete mixer developed by Blend from Rodengo Saiano (Brescia) with a contribution from GCF and GEFER technicians, who offered functional and technological support based on the years of experience they have gained working on railway tracks and tunnel tracks for underground railways in particular.

After performing tests and inspections at the end of April on the outdoor platform at the Camorino worksite, the six MX08s are now fully operational in the Ceneri Tunnel where they are used alongside the powerful 16 wheel gantries, technologically advanced "trolleys" designed with support from GEFER to operate in single-track bores. "It is a combination" - Roberto Garilli, GCF Site Manager at the Ceneri Tunnel, said - "that allows us to use a concrete casting system that is innovative, quick, flexible and efficient. The tunnel casting would not have been possible with the traditional methods we use, for example, on the underground lines. Gantries and MX08s will also help speed up the tunnel building process and respect the European schedules as well as guaranteeing high quality concrete and tunnel production security."

The award was allocated by a commission of experts consisting of Dr. Stefania Gnesi of CNR-ISTI, Prof. Benedetto Allotta of the University of Florence, Prof. Carlo Alberto Avizzano of the Scuola Sant’Anna of Pisa and Prof. Bernardo Tellini of the University of Pisa.
Blend will now be able to take part in the ERCI Innovation Awards 2017, the European innovation award assigned to the 12 railways districts/clusters that take part in the ERCI awards representing 10 EU countries: Austria, Belgium, Denmark, France, Germany, Great Britain, Italy (with DITECFER), Poland, Spain and Sweden.

Use of the MX08 for the Ceneri Tunnel railway track