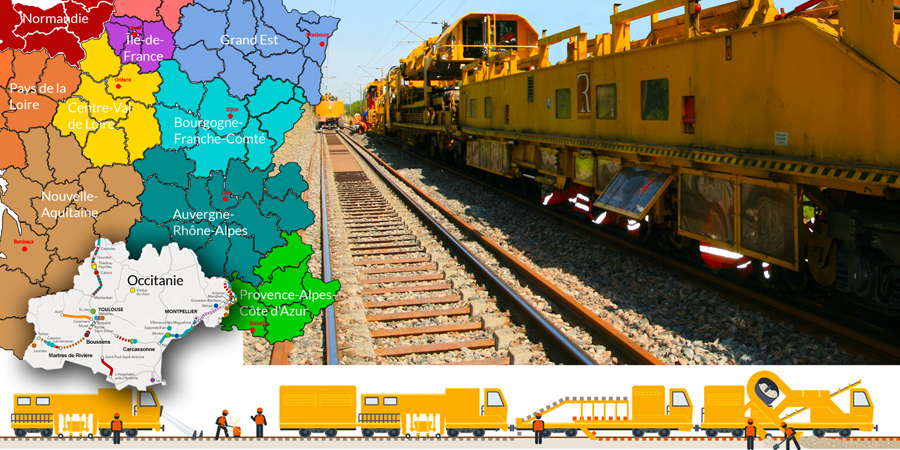 GCF makes an amazingly intense final push forward in France as it prepares to complete the fourth and final Suite Rapide Renewal site for 2017. The company has had to face and resolve a number of complications on the final 40 kilometres of line in Lot 2 of the Suite Rapide 2013-2017 Programme. However, the difficulties have not stopped it reaching record production on several occasions. Now it is focusing on the future after delivering to France a total of 900 kilometres of completely renewed, upgraded railway line with 17 worksites and 28 sections of railway line.

Work on the fourth 2017 site began halfway through October on the SNCF Toulouse-Bayonne line no. 650000 in Occitania in the Department of Hautes-Pyrénées between the stations of Boussens and Martres de Rivière where the present-day railway network has a maximum speed of 160 km/h.

A site that is not just "rapide"

This is a highly complex section of line with specific, objective problems that required the implementation of special safety procedures and protocols and relied on GCF's vast experience to guarantee the safety of over 100 people working on the line and achieve high quality performance in terms of production.

“For example", the French GCF Management said, "we had to draft and adopt special, stringent safety protocols for four areas significantly called the 'Seveso area': areas where the railway line is flanked by important chemical plants. An extremely detailed safety plan was drawn up for these understandably highly delicate areas to prevent any risk of incidents."

Special technical and procedural measures were also adopted to remove the old BiBloc sleepers with corroded, fragile iron ties which frequently blocked the conveyor belts and to upgrade over 20 level crossings on the line which, due to the obvious difficulties in closing them to traffic, were upgraded with "Hors Suite" (ballasted track laying) with small specialised track-laying teams working as part of the Transalp Renouvellement consortium.

Finally, extremely strict measures were adopted in order to work in safe conditions since there is a 63kV HV overhead line on the adjacent track. As the Site Manager explained, “the Safety Plan included all the measures that had to be taken and complied with, down to the smallest detail, to prevent workers and equipment accidentally coming into contact with the poles."

Using its vast experience and careful planning, GCF began work at the end of October poised to face a number of challenges including the SNCF's high expectations: 1,250 metres of upgraded track per day for 39 working days.

In the first stage, over 22 kilometres of line along track 2 were delivered by the 22nd November deadline: 22,525 metres of renewed track and 22,629 metres of ballast cleaning. Work progress in stage 2, on the other hand, has been more difficult with numerous strikes by SNCF railway personnel and depot workers: “In the five years we had been operating in France", GCF management commented, "we had never had machinery and trains at a standstill. Because of the lost days of production in this second stage, we have been unable to guarantee a constant 1,250 metres of renewed line per day, but have confirmed our commitment to Lot 2 of Suite Rapide with an outstanding performance.”

It should, in any case, be stressed how the GCF worksite has recorded outstanding performance in terms of daily targets even if not in terms of continuity: the P95 Renewal Train exceeded the 1,000 metres a day target on at least 13 days and beat the record of 1,500 metres a day on at least 5 days; the C75 Ballast Cleaner has also performed very well and has exceeded the 1,000 metres a day target on 12 different days with 1,885 metres of ballast cleaning in just one day. This is a very good performance even when compared with the high standards of 1,000 metres per day set by SNCF for the Suite Rapide all-in-one track removal.

The worksite, as established by the highly demanding French programme, will be completed on 15 December. In January, after the site shutdown for Christmas, complementary work and finishing will begin: the various sections of track that have not been worked on will be recovered over the next few years when GCF will start to operate in the area again with the new Suite Rapide programme.

From 18 to 22 December, all the trains and machinery will be subjected to stringent test and maintenance procedures and prepared for transfer from the depots of Lannemezan and Saint Gaudens to Carcassonne, the next Suite Rapide operational base. From next year, GCF - head of the Transalp Renouvellement consortium - will double its equipment and workforce in France to fulfil the commitment it made when it was awarded two of the three Suite Rapide 2018 - 2024 lots, that of renewing 2,800 kilometres of railway line in seven years.

The Boussens site in figures 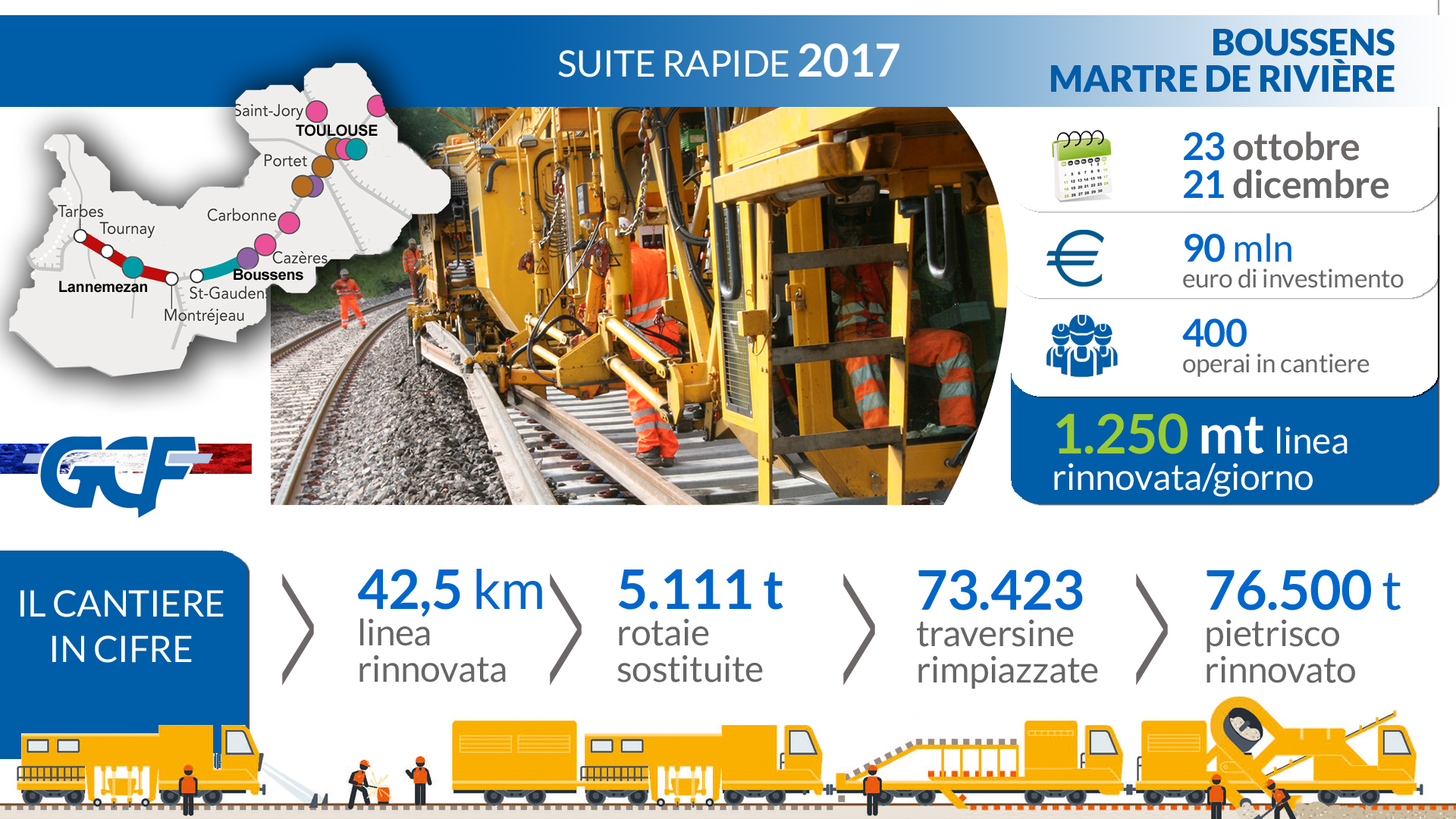