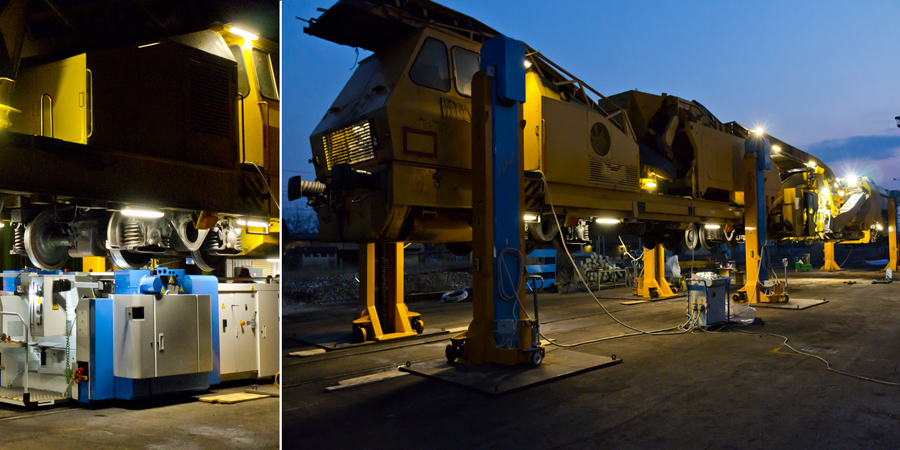 GCF's MobiTurn: the first mobile lathe in Italy is used for the first time.

Four articulated lorries, eight lifters each weighing 35 tonnes, a massive computerized and motorized lathe, the only one of its kind, and a team of specialized technicians. At Sacile, in the worksite next to the station, GCF's “MobiTurn”, the first mobile wheelset lathe in Italy, has been used for the first time.

It weighs 18 tonnes and due to its size is considered an oversize vehicle. “But it is a machine," Carlo Paoloni explained, "which thanks to its mobility will make a valuable contribution to the company. GCF has approximately 800 rolling stock: the mobile lathe and specialized team that has been assigned to it will help us optimize the maintenance procedures we adopt on our machines and improve organization, lead time and costs.”

The GCF MobiTurn team will be able to work directly on the sites. In this way, work can be scheduled on site and all problems concerning logistics and the time required that are normally linked to the need to move the machines to the lathing centres or dismantle the axles so that they can be taken to the lathe will be solved.

At Sacile, on the worksite/depot next to the railway station, "live" tests were carried out during the last week of February to assess the potential of the mobile plant by fine tuning the equipment and trying it out directly on the powerful Matisa C90 ballast cleaner which was raised two metres off the ground and underwent complete lathing of its wheels.

“This first run has been very successful," Edoardo Rossi, President of Generale Costruzioni Ferroviarie, said, "and we consider the learning and testing stage to be completed. MobiTurn has become fully operational. For some of the specialized workers, it provides an opportunity for professional growth and development. For GCF, it will be a valuable service that can be used by worksites, both in Italy and abroad."

28 February 2018, at Sacile, GCF's mobile lathe goes into operation for the first time

The photos show various stages of the lathe's first day in operation: calibration of the plant, lathing of the first axle, lifting of the 135 tonne C90L ballast cleaner, lathing of the wheels.