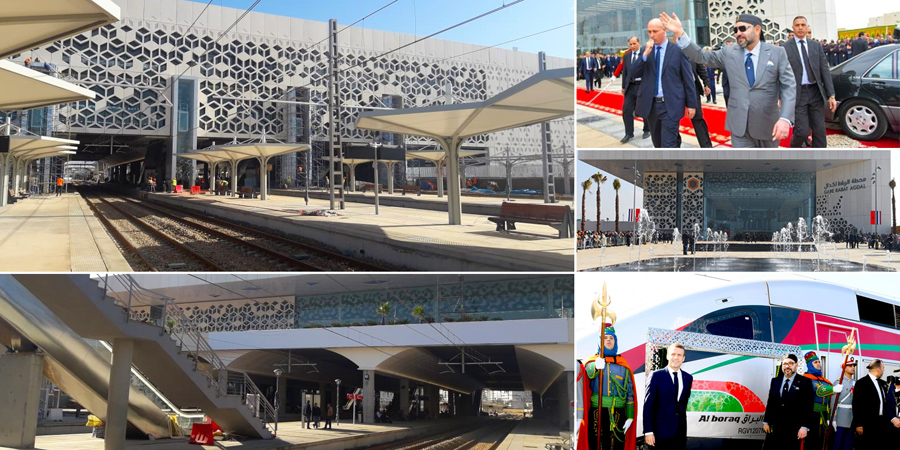 Rabat-Agdal: inauguration of the station for modernity

Official inauguration of Rabat-Agdal Railway Station. His Majesty Mohammed VI, King of Morocco, two days after the launch of the first high-speed train in the African continent, wished to celebrate the amazing new railway station of the Moroccan capital formally and personally by inviting the companies chosen by ONCF (Moroccan railways) to implement the project: Moroccan company TGCC (civil works) and the Generale Costruzioni Ferroviarie (entire range of technological works).

“A privilege and a source of great pride,” said the GCF spokesperson, Director of Works Ing. Maurizio Simeone, “in addition to enormous satisfaction in having contributed to the implementation of such vital importance for Morocco.”
The inauguration ceremony followed the launch last Thursday – attended by French President Emmanuel Macron – of the Tangier - Kenitrà high-speed line, the first in the entire African continent. An investment of 23 billion dirhams (2 billion euros), financed 50% by France, for a double track line over which the "Al Boraq" super train (named after the mythical stallion of Islamic tradition) has already set the continental record of 357 kilometres per hour.

Yet the Rabat-Agdal station was conceived right from the initial planning stages as the fulcrum - even symbolic - of the country’s entire modernization project: a plan involving 70 billion dirham (about 6.5 billion euros) entirely focused on High Speed.

It is no coincidence that it was chosen by the King for the inaugural ceremony of the station itself as well as the entire railway development plan. As journalists and media heard from Mohamed Rabie Khlie, Director-General of Office National des Chemins de Fer (ONCF) which manages Moroccan railways on a national scale. “What His Majesty inaugurated today in Rabat", he said, “is an overall vision of the entire network, a general project that includes, over and above the Tangier-Kenitra section, a third track from Kenitra to Casablanca and the complete doubling of the Casablanca Marrakesh line. In addition, of course, to the four latest-generation stations – Tangier City, Kenitra, Rabat-Agdal and Casa-Voyageurs – that will not only support the commissioning of high-speed trains but also the implementation of a new concept of travel on all routes between Tangier-Casablanca, Casablanca-Fez and Casablanca-Marrakech”.

GCF's commitment to the Moroccan railways

Rabat-Agdal Station is certainly the centrepiece that best expresses King Mohammed VI’s determination to reconcile modernity and tradition: an investment of 800 million dirhams ensured the extension of the old 23,000 sq.m. art-deco complex dating back to the French protectorate with a project inspired by the architecture of the airport, involving enormous spaces and boarding halls, separate departure arrival lines, food, restaurants and shop windows, as well as parking for 800 vehicles. A very modern, vital, multifunctional and service centre perfectly integrated into the urban fabric of the city of Rabat – the “lumière villa, capital of Moroccan culture" – and smoothly connected to the railway infrastructure – six platforms with 10 tracks measuring 400 linear meters for arrivals and departures – thanks to the technological solutions adopted by GCF in the construction of the superstructures and, in particular, electric traction involving the use of innovative portals and the high-performance Omnia support structures.
GCF also received congratulations recently from top ONCF management, not the least for its prompt intervention mid-October to rebuild in rapid time three tracks and the contact line destroyed by the dramatic derailment of a train at Bouknadel, at the gates of Rabat – an event that shook the entire country.
“We have operated since Spring 2014,” explained Edoardo Rossi, President of GCF, “in Morocco, engaged in the reconstruction of 20 stations along the Tangier-Casablanca artery with works concerning railway superstructures, the catenary system, signalling and lighting. These days of celebrations in Moroccan are also reason to celebrate ourselves, as well as rewarding satisfaction for the contribution we have been able to provide as part of a far-sighted development project that has already won the appreciation of the world railway organization as a turning point and example for railways in Africa.”

Al Boraq will come into regular service on November 26: 26 trains, 13 in each direction, will ensure connections at 320 km/hour between Tangier and Casablanca in 2 hours and 10 minutes, less than half the time taken by scheduled trains.