Venice-Mestre: Installation of the new gantries has been completed 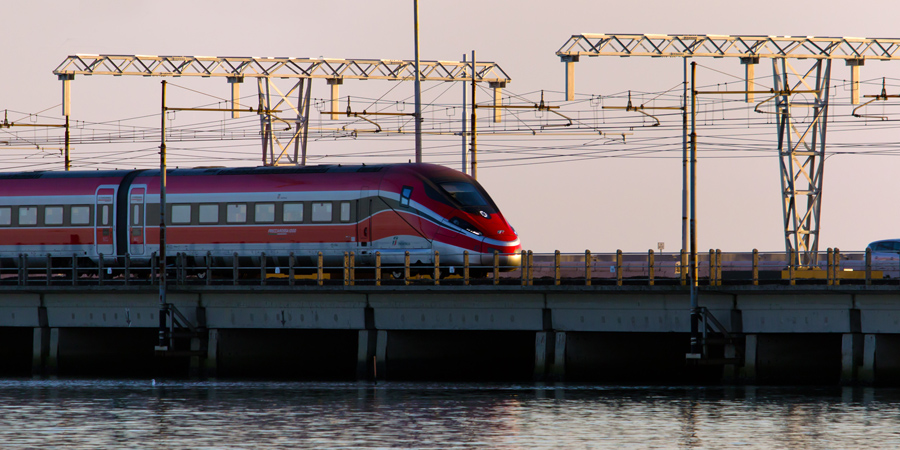 A new look for the Mestre - Venice S. Lucia bridge over the lagoon. GCF has just finished installing the new innovative gantries which not only support a completely new, more efficient overhead contact line, but also give a new sober, modern look to the bridge that leads to the most famous city of art in the world.

Launched in June and commissioned by RFI, the project involves complete renewal of the Electric Traction system with special attention paid not only to the technical operating of the overhead line, but also its environmental and aesthetic impact.
“For this reason," GCF design engineer, Michele Granzotto, explained, "we have decided to simplify the current system of supports by adopting an elegant design solution that consists of installing 50 8 metre high and over 18 metre wide T-shaped gantries: they will be placed in the centre of the two railway bridges and, due to their size, each gantry will be able to cover all four tracks.”

Installation and testing of the new innovative gantries

After replacing most of the connecting slabs on the two bridges and casting the foundation blocks in special concrete, installation of the new gantries was completed just a few days ago. The beams and girders are made entirely of stainless steel which guarantees resistance to the corrosive action of the salt water and have been assembled on site by redesigning the entire length of the bridge with a series of 50 gantries, each weighing 3.5 tonnes.
“This stage was an extremely difficult and delicate one," Site Manager Tiziano Bernardi said, "due to the sheer size of the structures we had to manoeuvre between the cables of the current overhead line, but with good organization and team work, we have been able to do our job efficiently and above all safely and meet the delivery deadlines and standards.”

Tests were performed on the new girder structure and a series of onsite static tests completed the vertical and transverse load testing already carried out at the Euros production plant in Naples at the beginning of the summer. Michele Granzotto had this to say: “This additional testing, as agreed with the Site Director, Rocco Martire, and Alessio Iacomelli of the RFI Technical Department in Rome, has examined the longitudinal loads exerted by anchoring 2 440 mm2 lines by using similar loads transmitted by two cranes equipped with dynamometers and installed on suitably braked bogies. For the systematic monitoring of deformations, a tape measure and a highly efficient, cutting edge Leica station were used.”

Securing the beam to the special concrete foundation block

Check-up on the entire bridge over the lagoon

The entire bridge has also undergone “X ray” testing as the GCF Technical Manager, Angelo Zullo, explained: “As instructed by RFI, we have begun a series of tests which certify the general state of health of the two railway bridges, the old one with its single span masonry arches and the new through-arch bridge in reinforced concrete.”
The check-up will consist of a whole series of diagnostic tests: continuous mechanical core drilling, sampling and analysis of the bed mortar, jack tests to determine the tensional state and mechanical characteristics and deformation of the brickwork, concrete samples and compression tests, tensile tests on the metal bars and use of a pacometer to conduct quality tests on the reinforcing steel in the concrete.

Two more stages of the project will be completed by Christmas. First of all, tunnels will be built on both sides of the bases extending along the entire length of the bridge. These will house the signalling cables and the new concrete cable duct containing the three power cables inside PVC pipes that will take power at 10kV to Venice station.

Second, the gantries will be equipped with highly innovative Omnia cantilevers which have been chosen because they have good mechanical strength and perform well in difficult environmental conditions like those in the lagoon.

The final stage, which will get under way at the beginning of 2019, will involve removal of the present overhead contact line and wiring of the new overhead line to give RFI a completely new bridge over the lagoon.

Time lapse: one night in one minute 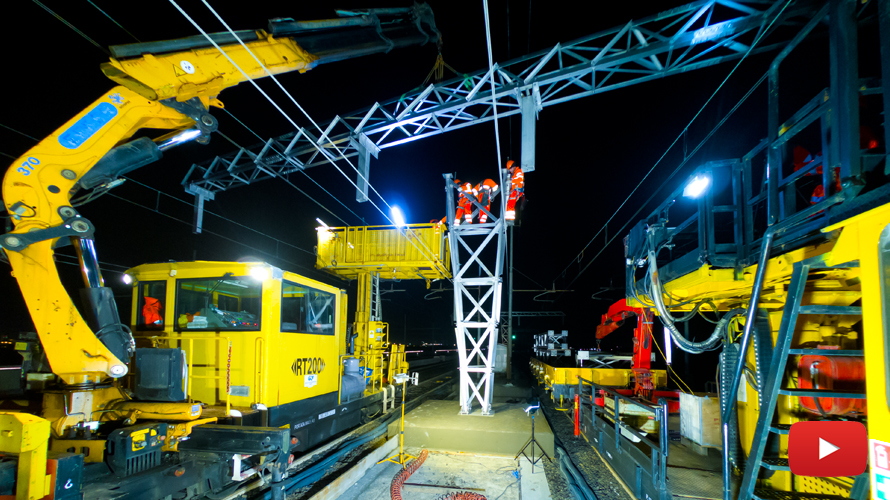