Suite Rapide and Lots 1 and 2 for GCF in France 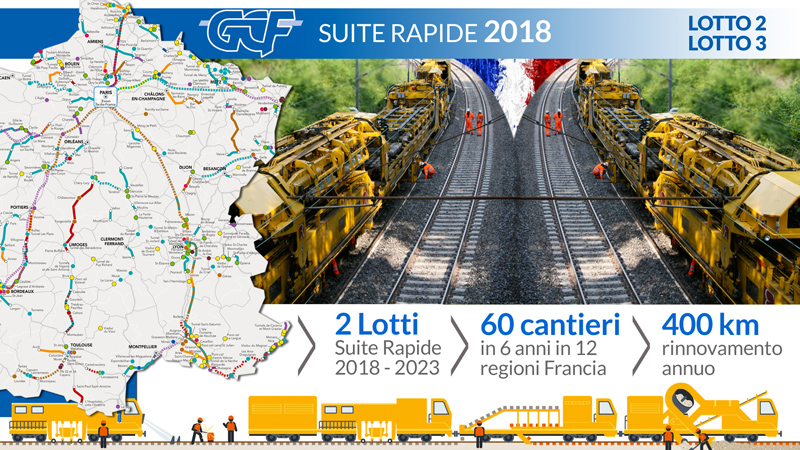 Substantial investments for GCF in renewal work sites in France.

These sites will cover half of the French regions and have been assigned the task of renewing, by cleaning the ballast and replacing sleepers and rails, 473 kilometres of railway line by the end of the year. Suite Rapide, at a rate of 1,000 m per day.
2018 marks the start of a new period for GCF in France where it will play a leading role in a project that involves big figures.

Having won last year two of the three lots put up for tender by SNCF with the Suite Rapide 2018-2024 programme, Generale Costruzioni Ferroviarie - head of the Transalp Renouvellement consortium - is faced with a daunting task, that of upgrading 2,800 kilometres of French railway over the next 7 years.
This is a huge challenge both from an organizational and operational point of view: from this year onwards, it will manage 10 sites in 6 of the French Regions extending from Provence to Normandy and from Grand Est to the Pyrenees, with two of them running at the same time.
On 8 January, the site at Carcassonne in the Midi-Pyrénées marked the start of the 2018 project in France and will have to renew 36 kilometres on track 2 of the 640.000 Bordeaux-Sète line between Carcassonne and Castelnaudary by the end of March. This is a very important line with on average 76 trains running a day (TGV high-speed trains included) at a speed of 160 km/h.
In the meantime, preparations are under way to open the Lot 3 "test site" covering 5 kilometres of railway line near the station of Beauvais, 80 kilometres north of Paris. Here, new machinery and new techniques will be tested on a combination of sections that will be completely renewed and those that will only be partially renewed.

“GCF has been operating on the Suite Rapide worksites in France since 2013," Alessandro Rossi, Chairman of Transalp Renouvellement, explained. "Over the last 5 years, we have renewed 900 kilometres of railway line. The Suite Rapide is a sort of boot camp where experience, organization and the ability to resolve unexpected problems and improve and innovate operating techniques all have their part to play. Now that we have been assigned Lot 2 and Lot 3, our commitment is doubled in terms of human resources and methodological research and, obviously, machinery.”
The total investment in new machinery for the French worksites made by the Transalp consortium amounts to almost 80 million euros with GCF investing about 45 million. The amount of technical equipment will double over the next few weeks. GCF will shortly be putting a second, sparkling new Suite Rapide convoy into operation consisting of a Matisa P95 renewal train, a Matisa C75 ballast cleaner - with special wagons to heat the rails - a B45 tamping machine, an R21 profiling machine and 164 railway wagons, 13 workshop wagons, various gantries and special wagons for the renewal train.

Large, significant investments have been made not only in production: "The Suite Rapide is a real factory on wheels," Edoardo Rossi, President of GCF, stressed, "that integrates trains and highly efficient machines that are capable of renewing the railway line in a very short space of time. The investments we are making in such efficient machines are, together with personnel training, a vital first step towards a balance between production times and employees' safety. Our aim is to be quick so that the impact on normal railway traffic is reduced to a minimum, but also to do this as safely as possible.”