Monte Ceneri Tunnel: the first of the two bores has been delivered. 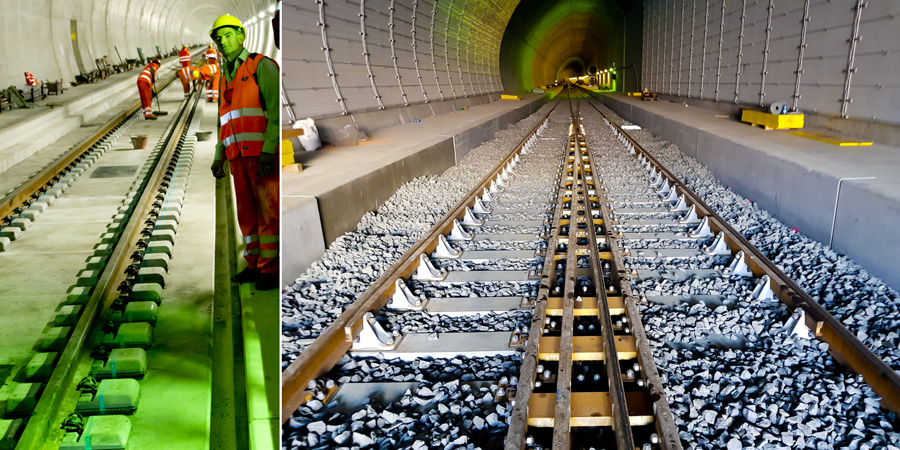 GCF completes the track work in the east bore of the Ceneri Tunnel.

The first track work objective has been reached in the Monte Ceneri Base Tunnel.
Just under 7 months from when track work first began, GCF finished laying the track on the 15.4 kilometre section of the first of the two tunnel bores, the east bore, on Friday 23 February and handed it over to the company responsible for the energy lot.

“This is an important stage," Edoardo Rossi, President of Generale Costruzioni Ferroviarie said, "which is just reward for the choices our company has made over the last few months in its work on one of the most important railway projects currently under way in Europe by contributing experience, efficiency and innovation".

Innovative machinery designed and built specially for the work on the Ceneri tunnel, new operating methods and techniques and work procedures designed to tackle the logistic complexity of laying track and casting concrete in a single bore: these are all finely tuned mechanisms which have helped to create an efficient and highly productive operating system for the Ceneri tunnel. The project has run like Swiss clockwork and, from the very first work site phases in Autumn 2016 to the start of track laying work in early summer 2017, has succeeded in optimising the limited time available so much so that the bore has been delivered 20 days ahead of the tight schedule and deadlines set for the execution phases.

“By delivering the east bore early," Roberto Garilli, GCF Site Manager, explained, "we will be able to concentrate on work in the west bore. The track laying has been completed, we have completed the delicate task of adjusting the rails to a tenth of a millimetre on two thirds of the section and we are now halfway through the tunnel with the concrete casting.”
The special MX08 concrete mixer, exclusively designed for the Ceneri Tunnel track laying site and used together with the powerful GCF gantries which can move effortlessly in tunnels, has made an important contribution to meeting and, at times, exceeding the 240 metres/day production rate in spite of the limited amount of space and the logistic difficulties that working in a single track tunnel entails.

In the meantime, the GCF team responsible for track laying has also started work on laying the points: this is an important stage, also on a symbolic level - its connects the Ceneri tunnel to the New Transalpine Railway, - and, from an operational point of view, it is a "spectacular" one given the size of the points, each more than one football pitch in length, which are first assembled in the depot and then transported and put into position.
“At the end of January," Raffaele Forcella, Operations Manager of the Swiss site, explained, "we laid the W32 point at the entrance to the North portal at Vigana: it is outside the east bore, on ballast, and connects it to the section that leads to the Gotthard Base Tunnel. In April/May we will be laying the other two points, one on concrete and the other on ballast, which will complete the track that connects the tunnel to the Gotthard Tunnel and the local network with Locarno.”

The west bore is due for delivery in June.