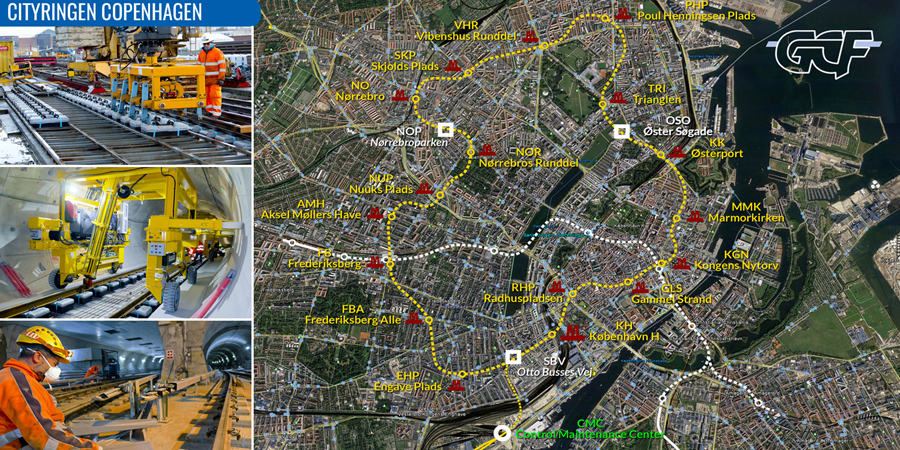 GCF completes the trackwork on the circle line in Copenhagen.

A milestone achievement on Cityringen, the new M3 line on the Copenhagen Metro, draws nearer. Last week, GCF - specialist sub-contractor for the Ansaldo Group - completed the trackwork on the twin tunnel circle line which covers the whole of the Danish capital.

This is an important intermediate stage in an underground project which in Denmark is considered the project of the century. Two 15.2 kilometre-long parallel bores run 40 metres underground to form a circuit that intersects 17 new stations and is connected to the present underground and railway system.

The project which is worth 2 billion, 850 million euros has been assigned to highly specialized Italian companies: the Copenhagen Metro Team consortium led by Salini Impregilo for the civil engineering works and Ansaldo STS for the railway works, signalling, maintenance and rolling stock. GCF (Generale Costruzioni Ferroviarie), specialist sub-contractor for the Ansaldo Group, has been given the task of working on the innovative superstructures on the entire tunnel section as well as the external connection with the CMC and a further extension of the Cityringen 2.3 kilometres north-east towards Nordhavn, acquired with another contract.

Cityringen: slab track to cut down on noise and vibrations

“For the work on the double-track tunnel," Francesco Costa Medich, the Site Director from Turin who was Site Director on the Turin underground system, explained, "we decided to use an innovative Slab Track superstructure with LVT (Low Vibration Track) blocks which are embedded in slab concrete. This is a technique that effectively meets the project objective of reducing vibrations to a minimum and, consequently, the noise generated by trains as they pass under sensitive parts of the city.”

The construction method, procedures, equipment and machinery used: every element on the GCF site has been designed, assessed and selected according to the amount of room for manoeuvre, the overall size of the project and the complex logistics. The Cityringen worksite is a hive of industry in the city: 22 external work sites which surface in the very heart of the city and over 1,500 people working every day on the twin tunnel which as far as the "heavy" building materials are concerned has only one point of access teeming with vehicles moving backwards and forwards.
“Our Danish team has excelled in its work on the Cityringen site," Edoardo Rossi, GCF President, stressed, "it has come up with innovative engineering and operational solutions and developed highly practical, effective operating procedures. Highly complex logistics have been efficiently handled minimizing the impact of operating machinery and vehicles right in the heart of the city and in the tunnel and coordinating the difficult supply of materials with the other companies via a single point of access to the underground site."

Cityringen, the new strategic infrastructure in Copenhagen, received official honours at the end of April with the visit of the Danish Minister of Transport and Public Works Ole Birk Olesen, the Mayor of Copenhagen, Frank Jensen, and the Mayor of Frederiksberg, Jørgen Glenthøj.

The schedule for superstructure work on the new Metro

Between the autumn of 2015 and the first few months in 2017, the Danish GCF team had completed the first 14-kilometre section of single track between the Central Station in Copenhagen and the Nørrebroparken shaft: a “Functional Section” which has been used to test the vehicles supplied by Ansaldo Breda in the pre-operating stage since last September.
“Now, 12 months later," Costa Medich continued, "we have completed the circle line trackwork with another 18 kilometres of single track. Completion of the concrete casting is an important milestone in the work schedule. Welding and finishing work is all that is needed to complete the trackwork and the third rail by the end of June. Then we will proceed with a detailed schedule of technical tests and inspections. GCF's part of the project will be officially delivered by the end of the year.”

The new, fully automated Cityringen Metro will serve 350,000 passengers, 24 hours a day, with a total of 130 million users a year. The aim of the project is to place anyone within 500 metres of a Metro station, anywhere in the city. In this way, the number of public transport system users is estimated to increase by a further 25% with a drastic reduction in urban traffic and CO2 emissions. The underground circle line will help to make Copenhagen the world's first carbon neutral capital city by 2025.

Some technical data on the new Metro superstructure 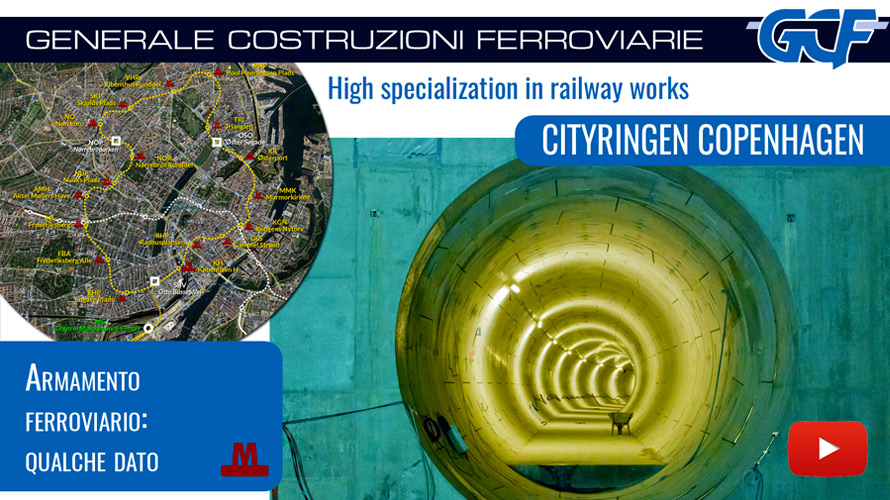