Gold blocks for the Monte Ceneri Base Tunnel 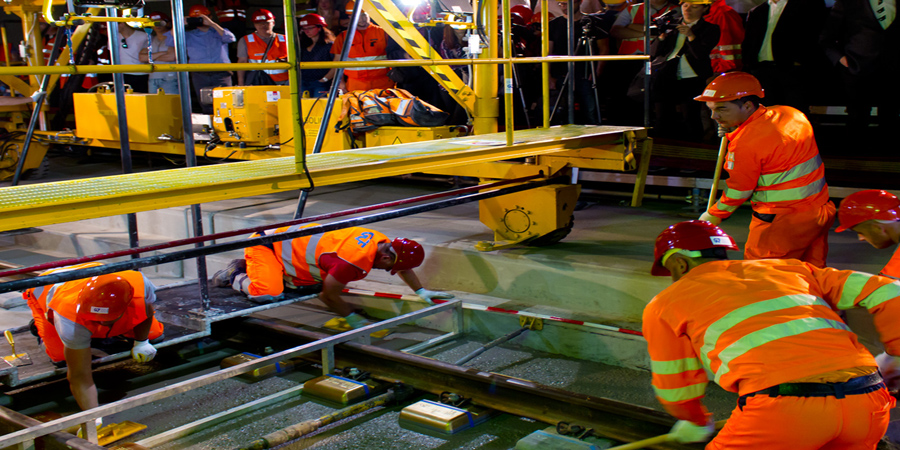 The official "Goldene Schwelle" event marks the completion of GCF's track work on the Ceneri Tunnel.

The LVT (Low Vibration Track) blocks, the last in a series of 98,000, are gold in colour and have been fixed into the concrete under the eyes of politicians, personalities from the business world and journalists. The official event “Goldene Schwelle”, held on Wednesday 30 May in Camerino, with the casting of the "gold blocks" marks an important stage for the Monte Ceneri Base Tunnel and for GCF: completion of the track work.

An official event celebrated with a choir concert: in addition to this "golden milestone", the NRLA, the New Railway Link through the Alps, which as of 2020 will cross the Alps and link Northern and Southern Europe with a completely flat High Speed/High Capacity line, is close to completion.

“This is a very happy moment for all of us", Dieter Schwank, Board Chairman of GCF's client AlpTransit Gotthard AG, remarked with satisfaction "and a time for celebration for everyone who has worked on the track laying, completed the work to schedule and maintained the high standards of quality required.”

The track work – first stage in the Railway Technology Batch assigned to the Consorzio Mons Ceneris (Marti Tunnelbau, Mancini & Marti, Pizzarotti e Generale Costruzioni Ferroviarie) – was launched by GCF on 27 July 2017, after 10 months work preparing the site work.
“At that time", Edoardo Rossi, GCF President recalls with satisfaction, "we had made a promise: we would provide the best of our experience and guarantee the maximum responsibility and commitment. The Ceneri Base Tunnel is a strategic project in a framework of European railway infrastructure. We are proud to have helped add this important piece to the puzzle and met expectations as far as deadlines and quality of the work are concerned.”

Over these last 10 months, in the difficult field of tunnel track work, GCF has focused on innovation - in machinery and equipment as well as in methods and techniques - organizational skills and flexibility. Working at a relentless pace since last August in the twin-bore Ceneri Tunnel, 140 workers, coordinated by their Site Manager Roberto Garilli, have built 30 kilometres of track on concrete at an average rate of over 270 metres per day; they have also begun work on two points systems which are among the largest in Switzerland, have made and transported approximately 35,000 cubic metres of concrete, and have skilfully, patiently and steadfastly finished and hand floated an expanse of concrete which is the equivalent of 20 football pitches.

The "technical data sheet" for the Ceneri tunnel is one based on high figures: 98,000 LVT blocks, 600 60E2 type rails in 120 m sections, approximately 8,500 pre-stressed concrete sleepers, 230,000 Skl14 flexible mounts, 16,000 cubic metres of ballast, 35,000 cubic metres of concrete transported by 6 innovative MX08 concrete mixers and portals designed for the project and presented with an award by the Ditecfer Railway Contest as the best innovation in the railway sector for 2017.

“On 23 February, 19 days ahead of schedule, we delivered the east bore," Raffaele Forcella, Operations Manager at the site, explained, "and we were able to deliver the west bore 30 days ahead of schedule too. This is the result of great teamwork and collaboration between the design team and the technical and executive management teams. It is also important to stress how by using totally new, innovative machinery, we have achieved excellent results in terms of safety and respect for the environment.”

Next stages in the NRLA and advantages to be gained

By August 2019, the overhead power line, communication system, safety and driving technique systems will be installed, track laying on ballast will be completed for the service branch lines and the above-ground sections on the two viaducts and the Lugano-Locarno branch line and, finally, work will begin on the last of the three points. After a series of tests and inspections, a test period will begin in March 2020 and in September, the tunnel will be officially handed over to the Swiss railways to be integrated in the FFS railway network in December 2020.

The NRLA will bring considerable advantages when the Ceneri Tunnel is also fully operational: road goods traffic in Switzerland will be halved due to an increase in goods trains which will finally be able to follow a flat route, will be longer (until to 750 metres) and capable of transporting up to 2,000 tonnes. There will also be a significant impact on passenger traffic - with 80 trains a day, passengers will be able to travel from Milan to Zurich at a speed of up to 250 km/h and travel time will be reduced to three hours (-25%). The NRLA project will create 44,000 jobs and an estimated added value for the economy of EUR 4.6 billion per year. However, the environment is what will benefit the most: the reduction in CO2 emissions will amount to 6 million tonnes per year. 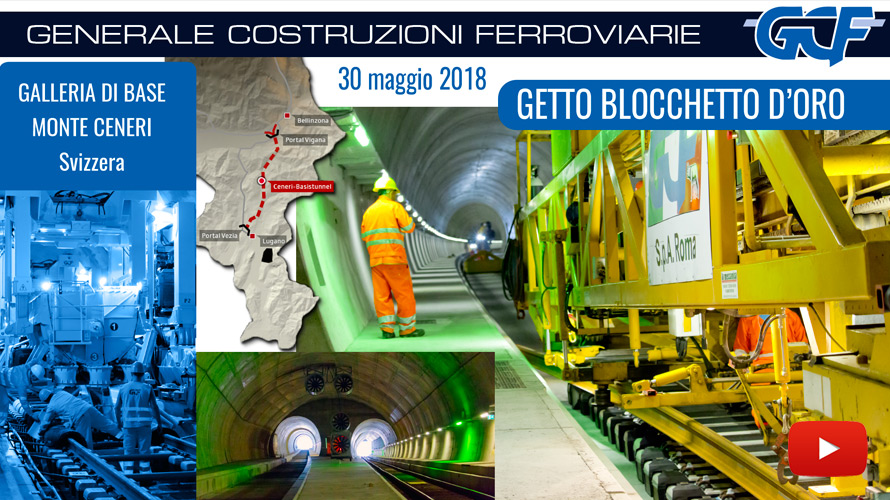