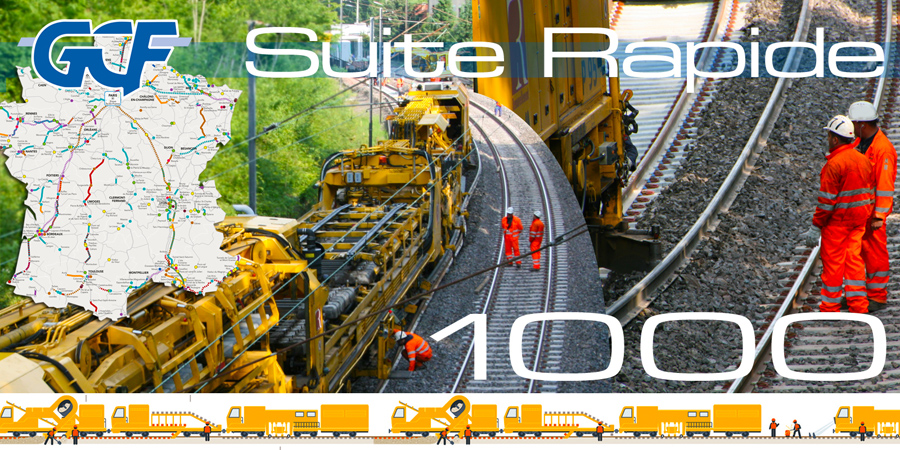 In France the Rossi Group has renewed over 1,000 kilometres of track

Over 1,000 kilometres of completely renewed railway line. GCF's summer in France has reached a significant landmark for the made in Italy Suite Rapide.
With a series of 22 sites – starting with the Pau Dax one in 2013 – on 35 sections of the French railway network, the Rossi Group, head of the Transalp Renouvellement Consortium, has delivered 1,078 kilometres of new track – by replacing rails and sleepers – and 1,094 kilometres of cleaned ballast to SNCF, the French national railway company in just under six years.
All this has been done at a rate of 1,000 metres per day as outlined in the Suite Rapide protocol, the "fast lane" of the French railway network General Renewal Plan.

“One thousand kilometres of renewed railway line," Alessandro Rossi, Chairman of the Transalp Renouvellement Consortium, said, "are an important landmark for our Group. It is the result of hard work by men and equipment, perseverance, experience, the ability to solve problems and unexpected situations and organizational skill. For GCF it is a rewarding moment and above all, one that stimulates hard work in the future: in the Suite Rapide 2018-2024 Programme, we have won 2 of the three lots that form the maxi-contract. We will be working on another 2,800 kilometres of railway network over the next 7 years: 400 kilometres per year that will put all our strengths and experience to the test.”
Over the last few years, the substantial investment made by CGF and the Transalp Renouvellement Consortium, amounting to a total of 80 million, to double the fleet of trains and high efficiency machinery needed to sustain a rate of 1,000 metres of renewed track per day has almost been completed.

"Every Suite Rapide," Carlo Paoloni, GCF Site Manager, explained, "is a modular factory on wheels, a convoy specially built using the best, highest performing machinery which is operated by highly specialized, experienced personnel. As far as I am concerned, our ability to work as a team and our innovative, efficient way of working on a logistical and organizational level are our most valued qualities here in France.”

“These are two very different lines,” Sabino Carbone from the French GCF Management explained, “which are both problematic. The first has a number of level crossings and areas of risk linked to the presence of industrial plants whereas the second, single track, has several tunnels and steep slopes. The safety plans which have been specifically drawn up and contain detailed operating procedures and strict rules of conduct will allow us to deal with every risk situation and prevent accidents.”

Final delivery for both sites is scheduled for mid October.