“Proud to have helped RFI in Genoa” 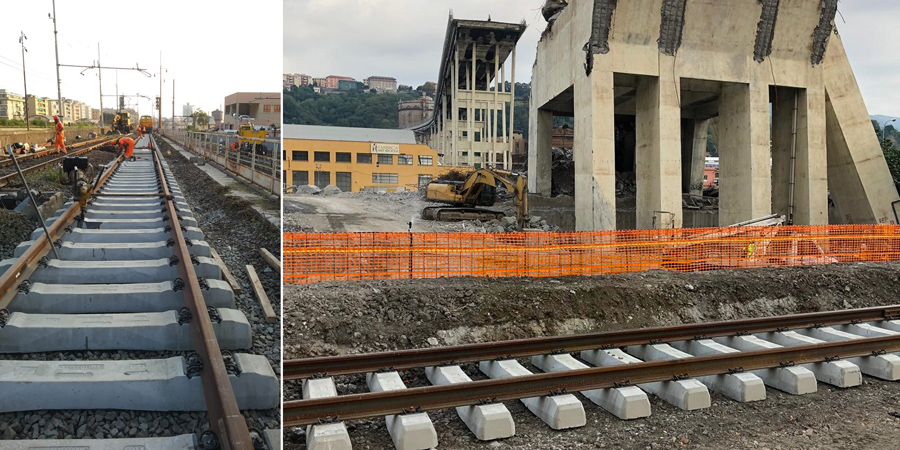 "Proud to have helped RFI with renewal work on the railway lines” Mario Alvigini, Site Director for Gefer, said. With support from the Novi Ligure-based company which is part of the Rossi Group, the railway lines involved in the dramatic collapse of the Morandi Viaduct in Genoa this summer have now been rebuilt in record time.

The January edition of La Tecnica Professionale, a monthly periodical published by the College of Italian Railway Engineers(CIFI), has devoted a lengthy article to the renewal work and highlighted the contribution that RFI has made to relieving the inconvenience and hardship suffered by the entire city which was badly hit by the tragic event “by making a major effort with the renewal work which has been completed in record time.”

"Both directly," Mario Alvigini explained, "and by coordinating other sub-contractors, the work has involved about sixty men working in three different areas who have intervened immediately and worked hard to remove the debris and put the railway back into service as quickly as possible.”

Three railway lines, which are a vital part of the Genoa hub, were involved in the collapse of the Morandi Viaduct and the collapse of pillar no. 9 alongside the railway line: the “Sommergibile” double-track line which connects the port terminals and the Giovi pass, the “Bastioni” line, which is also double track, and the “Sussidiaria” line, underneath the eastern section of the bridge, which has still not been repaired.
In addition to damage to civil structures, the collapse of the Morandi bridge has meant that over 300 metres of track (railbed, sleepers and rails) have had to be replaced, the overhead Electric Traction line, cables and part of the supports for one of the two power supply networks have had to be repaired, and the signalling and telecommunications systems have had to be replaced.

Mario Alvigini commented: “This was a special challenge for all our team, both from an emotional point of view and because our sense of responsibility drove us to do our very best in the shortest possible time. This has helped RFI re-open the rail links and make the city of Genoa feel less isolated.”

Images of the renewal works