A Grizzly for the safety of tracks 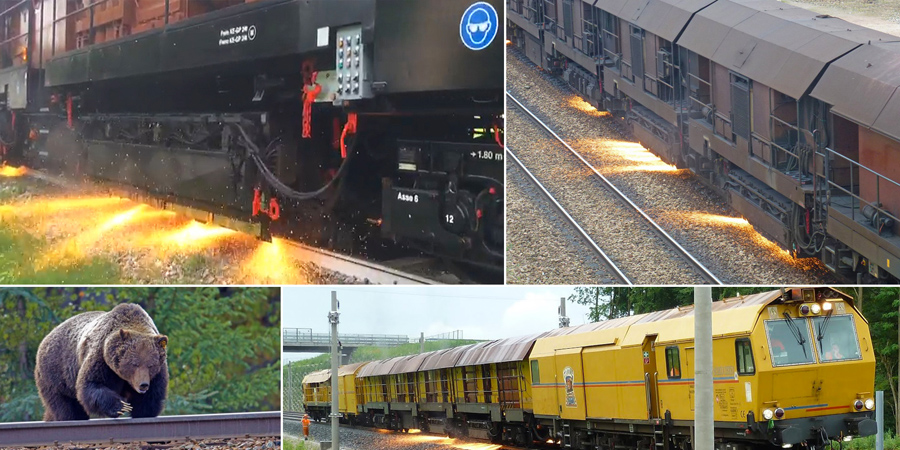 Safer tracks and less noisy. The battle against “moireing”, typical mechanical wearing signs of tracks, has started. In Centre-Northern Italy, it returned to RFI, already over 500 km of restored railway, with ground and perfectly re-profiled tracks. “Grizzly”, precious alley of GCF (Generale Costruzioni Ferroviarie), is one of Scheuchzer’s power profiling trains, Swiss sub-contractor boasting at least sixty years of experience in the sector.

A unique train, Grizzly features high performances, is equipped with sophisticated troubleshooting tools able to perform detailed analysis of the track’s state and five workshop-wagons equipped with 58 grinding machines with variable granulometry, sharp claws able to smoothen and re-profile the track’s railhead with precision of a tenth of a millimeter.

“In the past", explains Antonio De Vivo, manager of Scheuchzer’s grinding site, "trains of great power were needed, that were dragging stones and were moving forward and backward on the line, up to 200 times. Today, also in the worst conditions of the tracks, it possible to obtain perfect re-profiling in just a few steps, checking the state of the track before and after the treatment with tools able to detect also the tiniest imperfections”.

The advantages of track re-profiling

The re-profiling of tracks has obvious advantages for the safety of the trains’ circulation: indeed, worn tracks often cause derailments. The elimination of defects generated over time (oval pockets, desegregations of the rolling surface, undulations, deformations, micro holes: generally called “moireing”) and the restoring of the original shape of the railhead and proper friction properties of the track, constitute a cost-effective maintenance solution able to increase the track’s life cycle. Indeed, re-profiling is often executed also on new tracks to remove potential oxidation films and improve the overall resistance properties. Intervention particularly useful in slopy sections, where sliding is more frequent, and also in sections characterized by numerous turns, where the rolling stocks may incur in sliding phenomena.

“Track re-profiling", continues Roberto Accinelli, manager of Generale Costruzioni Ferroviarie , "is also one of the most efficient techniques to reduce railway noise caused by rolling, the noise caused by the vibrations produced by the contract between wheel and track, the stronger and the less regular the contact surface is. Numerous studies confirm an estimated noise reduction up to 10 dB”.

Re-profiling will be executed on about 2,000 km of line in the Centre-North. About 425 km were delivered in Turin area; since January, GCF has been operating in Milan area, where it completed almost 100 km. The work concerns ordinary lines and also High-Speed lines like the Turin-Milan high speed line, almost completed, and the Brescia- Bivio Casirate line, where works are foreseen to start next May.

In respect to railway maintenance: the turning of rolling stocks with portable lathe