Functionality and aesthetics for the new Liberty Bridge 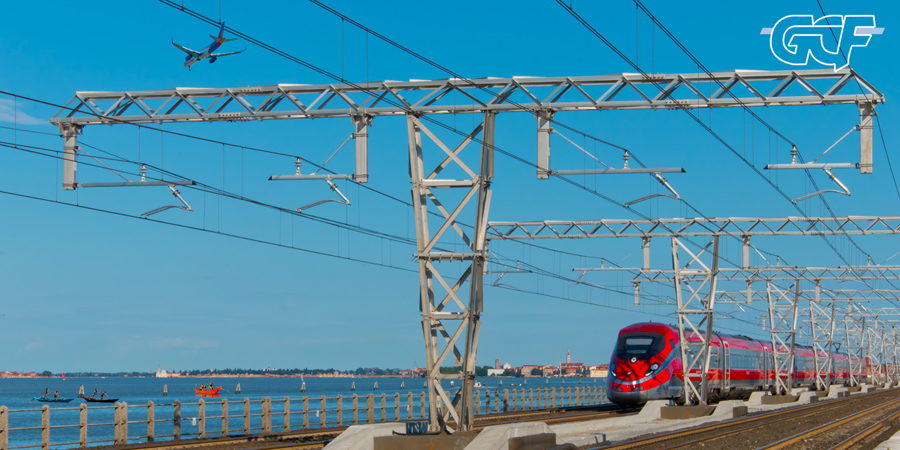 GCF ends the new T.E that changes the skyline of Venice lagoon bridge

Ten months of construction site and 35,000 hours of night work to complete the mission entrusted to GCF and RFI: fully renew and boost the railway Electric Traction on the Liberty Bridge, the historic trans-lagoon connection that joins Venice to the mainland since 1845.

Since a few days, the safety meshes for the last touch-ups to civil works were removed and the result is visible and can be appreciated from a technical viewpoint and also in terms of aesthetics. Indeed, the project scopes are two: rebuild the electric supply line with criteria such to make it more powerful and resistant to atmospheric events typical of the lagoon; secondly, privilege a design that is not only functional must aesthetically sober and innovative, more suitable to be integrated harmoniously in the environmental and architectural context of a city like Venice, known worldwide for its beauty.

10 months of works for the new line, at night time and in climatic conditions not always favourable…

Innovation, starting from the design and materials

These functional and aesthetic scopes – explains GCF’s designer Engineer Michele Granzotto – guided our choices, in agreement with the Archaeological Superintendence and RFI Management, starting from the choice to adopt innovative “T” portals: in relation to traditional structures, since they are supported by a single pillar, they were able to be placed at the centre of two railway bridges, in rear position compared to the salt water and, therefore, more protected against corrosive agents”.

All choices concerning the materials used are absolutely in line with the objective to achieve resistance over time: from the special RCK45 concrete used to make 74 central bases (about 1,000 cubic metres), to the aluminium of the “Omnia” type shelves – light and particularly resistant to corrosive agents- to the particular Aisi 316 stainless steel used – instead of the traditional galvanized steel – for trellises (7.60 metres for 1,700 kg), for the enormous beams able to serve the four tracks (18.60 metres for 1,850 kg), for the 200 swinging elements and all the metal work: overall, about 230,000 kg of special steel to cover the 2.5 km line section.

“From January to February – says site manager Tiziano Bernardi – after equipping the new portals with shelves, we tensioned the new 4 contact lines with overall section of 400 sq mm and fully adjusted wires. An important work that required our best efforts and, in only 16 night tensioning phases, allowed to dismantle the existing lines and replace them with boosted lines anchored to modern automatic tensioning systems”.

A race against time (in addition to, in some occasions, against bad weather): in average, about 800 metres a night of new line built and replacing the existing line, thanks to the use of an ultra-efficient tensioning train with its 15 modular elements able to develop along the concerned section, and thanks to the intervention of teams of special workers, united and trained to work together. A real, extremely efficient moving workshop, able to dismantle the old components, collect hundreds of metres of ropes and wires, tension the new bearing cords and wires, provide for perfect swinging and tension adjustment of the new airborne line and, after a few hours, punctually return to the railway traffic, every morning at 5 a.m., a restored and installed section of airborne line.

At the end, after completing the tensioning phase, in the last weeks, the concrete ducts and troughs were built that, for the entire length of the bridge, allow the passage of new signalling cables and the three supply cables that bring current up to 10kV to S. Lucia station in Venice.

After completing the dismantling of the existing bearing structure and removing the safety meshes, GCF’s construction site is dismantled and the Liberty Bridge can show off – at 173 years from inauguration- its new, glamourous and modern skyline.