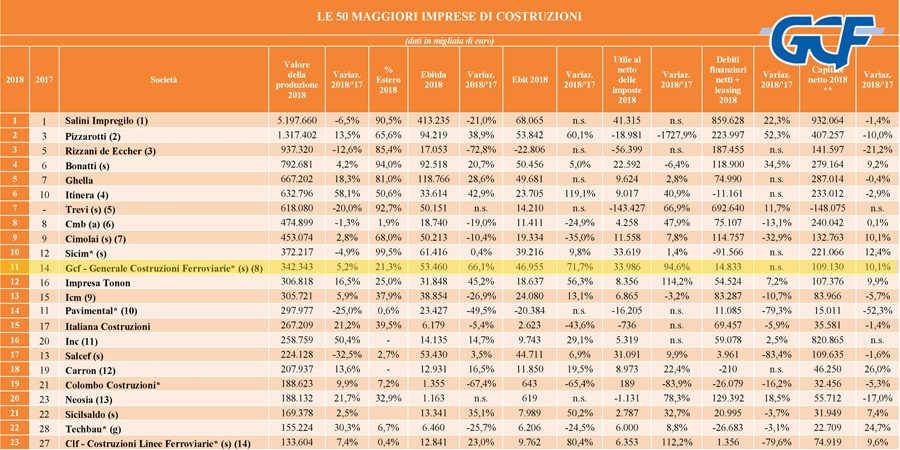 With a production value of over 340 million Euros, Generale Costruzioni Ferroviarie escalates the annual classification of Il Sole 24 Ore ranking 11th in the Top 50 in the Italian Building companies classification. An outstanding performance that marks the undiscussed leadership role of GCF in the specialized sector of armouring, electrification and railway signalling works.

The analysis carried out by prof. Aldo Norsa of Guamari studio was anticipated a few days ago in the “Building and Territory” pages of Il Sole, which examines Italian building firms operating in general and specialized building and civil sectors, drawing up the 2018 classification of the top 50 companies in terms of turnover. A classification that ranks 39 general companies and 11 specialized companies and that, in raking the best, directly and indirectly underscores the fragility of a system forced – as stated by Il Sole – by the “asphyxia of the national market of public works” to be exposed to the “foreign risk” (due first of all, by the lack of numerous top companies or lower ranking in this year’s classification) but also underscores, on the other hand, the quality of the performances of those firms that in a similar and difficult scenario, were able to consolidate and improve their financial situation.

With regards GCF, 2018 confirmed the escalation that saw it ranking, the previous year, from the 18th to the 14th place and now stepping up by three position up to the 11th place with a turnover increase of 5.2% compared to the previous year. First specialized company operating exclusively in the railway sector (the classification only features two more), GCF’s performance can also be appreciated for the reduced impact of the foreign percentage of turnover (21.3%), compared to significantly higher shares (around 80% with peaks up to 99%) that characterize the Top Ten and consequently, are further exposed to the “foreign risk”.

Moreover, it must be underscored that about 53 million must be added to the balance sheet data examined by Il Sole (attributed to Rossi Group but, in reality, only to GCF), constituting the 2018 production value of Gefer and that, overall, bring the 2018 financial statements of Rossi Group to over 400 million only in the railway sector.