Kosovo sets out to modernize its railway network with GCF 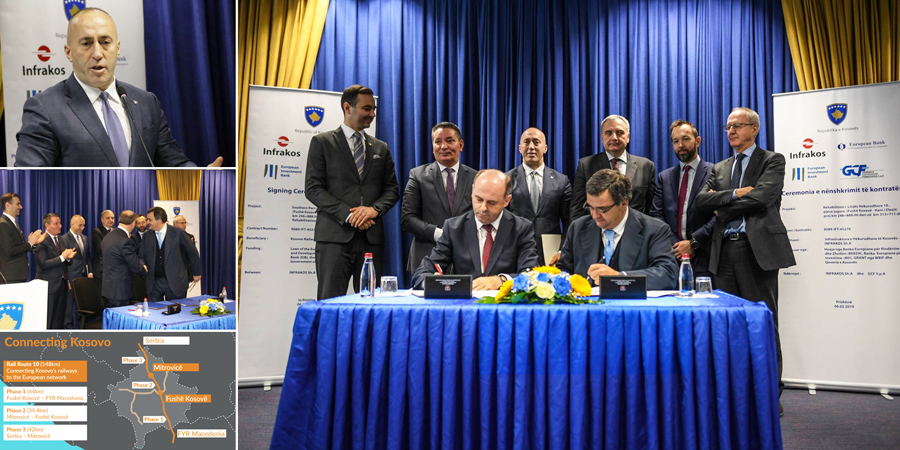 Infrakos-GCF contract for the first section of Rail Route 10

“This is a big day for Kosovo.” The Prime Minister of Kosovo, Ramush Haradinaj, has welcomed the official signing of the contract which assigns renewal work on the Fushë Kosovë - Hani i Elezit line to GCF (Generale Costruzioni Ferroviarie). Scheduled to be completed within three years, the project will link the Balkans to countries in the European Union.

In the Presidential Palace – in the presence of the highest political authorities in the country, the Italian ambassador and representatives of the European Union – a long round of applause accompanied the signing of the contract by Agron Thaci, Managing Director of Infrakos (Kosovo Railways Infrastructure: the railway company) and Edoardo Rossi, President of Generale Costruzioni Ferroviarie.
The ceremony made an immediate impact on the national media in Kosovo. The whole country hopes that “Rail Route 10” – this is the name of the whole railway renewal project that the Kosovo section is a part of – will have a strong effect on economic development in the entire Balkan area where Kosovo plays a major role, and will mark a "change of direction” and make a significant contribution to strengthening regional and Pan-European exchange and cooperation.

“Modernization of the railway infrastructure," the Prime Minister Haradinaj stressed, "is vital to the development of the region's economy and is of strategic importance to the country. Work will now start of redevelopment of the Kosovo railway network, an important hub in the railway link between the Western Balkans and countries in the European Union.”

The railway renewal project in Kosovo

The railway network in Kosovo covers approximately 330 km of railway line serving passengers and about 100 km for goods and industrial traffic. The entire network is single-track and only partially electrified. According to a preliminary report by the EU, the maximum speed limit is 70 km/h even if 160 km/h could be reached on many parts of the network.

The contract signed by GCF marks the start of the first stage of the modernization work on the country's central line on the North-South Belgrado-Skopje corridor. The work involves a section of 68 kilometres of track which extends from the station in the capital Prishtina to Hani i Elezit, a city close to the border with Macedonia, covering a complex route consisting of 73 points, 33 bridges, an underpass and 7 tunnels.

The work - that will be carried out by GCF together with the designated local subcontractor, the R & Rukolli - will begin in March and within three years Kosovo will have its first really modern railway line which will be of the same standard as European ones and will be perfectly integrated in the international network.

“Today is the start of something new for Kosovo's railway system and, in some sections, trains will be able to travel at almost 150 kilometres per hour,” the Minister of Infrastructures Pal Lekaj stated in a press conference.
The contract that GCF, by demonstrating that it has very high technical requisites and excellent organizational skills and operational ability, was able to win by beating a host of important international competitors is worth roughly 78 million euros.
“Winning this important contract," Edoardo Rossi, GCF President, said, "is not only just reward for the weeks of engineering work, but also the quality of all our worksites in Italy and abroad. We will start our work in Kosovo well aware of the importance that this project will have for the development of the country and we will honour the trust that has been placed in our company by offering our best efforts and expertise.”

The Managing Director of Kosovo Railways, Agron Thaci, also expressed great satisfaction: “This is a very special day culminating in a contract that will have a strong effect on the country's economy and that of the entire region. The advantages will be plain to see not only on an economic level but also for its social and environmental impact.” The EU representative in Prishtina, Luigi Brusa, stressed the strong boost to employment that the work will have: “We are embarking on a journey," he told journalists, "a real journey and a real investment because it will have a significant impact on the economy and employment in Kosovo.” 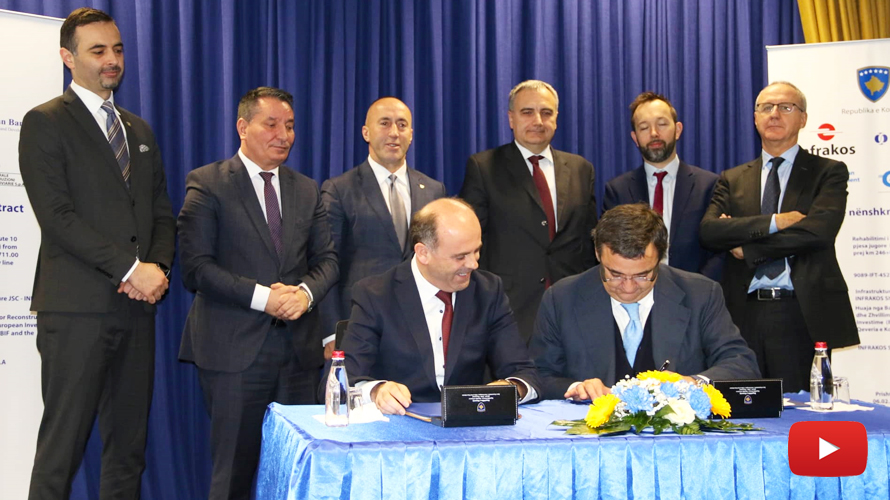 The official ceremony of signing of the contract between Infrakos and GCF, in the presence of the Prime Minister of Kosovo, Ramush Haradinaj, and political authorities of Kosovo, Italy and the European Union