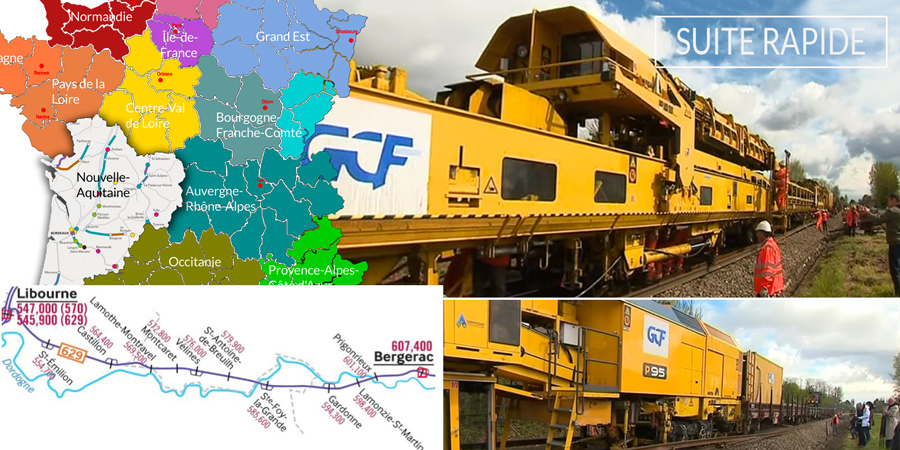 GCF’s “workshop-train” at work on a regional line

Local media and online, as well as national TV broadcasters: the attention of information organs was captured in Aquitania by GCFs´Suite Rapide train that has been working since a few weeks, for the renewal of Bergerac – Libourne railway line. It is the first time in France that a powerful “workshop-train” is used on a regional line.

The construction site, which opened in mid-March, will operate for 16 weeks, until July 31st. It has the task to fully renew line 629000 in the section between the stations of reference cities: Libourne and Bergerac.
“It is a fairly outdated railway line - explains Sabino Carbone from GCF’s French management - not electrified, laid on wood sleepers that allows for a maximum train speed of 100 km an hour. The renovation project is essential so that the line can provide a service suitable for the needs. The section being renovated runs for 62 km on single track, it crosses 9 stations in addition to Libourne and 4 minor, non-guarded stations (points d’arrêt non déservis), it crosses Dordogne a few times, it intersects the road network with 74 level crossings. In brief, it is a busy construction site”.

A “minor” line but equally important for the French people who live in Aquitania area characterized by countless cities, towns, villages and districts connected by a thick network of roads crossed by the railway.

Indeed, for the first time, SNCF decided to opt for an “in suite rapide” intervention, using on a TER line – Regional Express Transport- one of the most performing workshop-trains present in France, where three are currently in operation. And, for the first time, in order to underscore the importance of the project, local communities covered the expenses, together with the State, SNCF and regional authority.

“There are over 3,200 regular users of the line - underscores Sabino Carbone - and this explains the expectation and curiosity stirred by the works of GCF’s construction site; moreover, differently to many other Suite Rapide construction sites, the works are programmed during the day, thus more easily allowing media staff and operators to follow the evolution”.

The efficiency with which the brand-new machines of GCF (renovation train P95) and Transalp Renouvellement (ballast cleaner C75 2C) renew the line at an average pace of about 1 km a day, stirs remarkable astonishment, also among journalists. “A robot train - as defined by France 3 with admiration - 750-metre long, highly technological and operated by 70 technicians” that in a single run, is able to dismantle the old sleepers and old tracks, replacing them with new rails, in addition to sieve, substitute and compact the entire stone screed and finally clean the construction site area from any potentially polluting object or element of the old line.

At the end of the intervention on the fully renewed line, the trains can reach a speed of 140 km an hour.

Suite Rapide, the service of the French TV 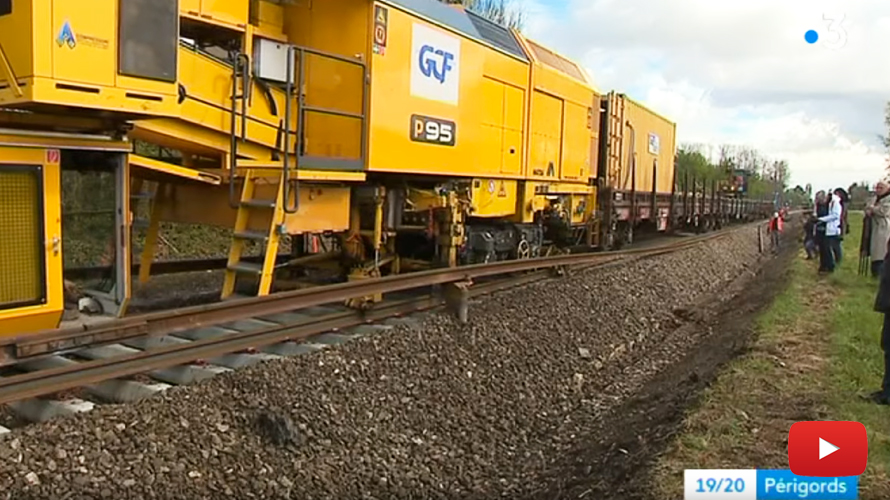