The restoring of railway Rail Route 10 has started in Kosovo 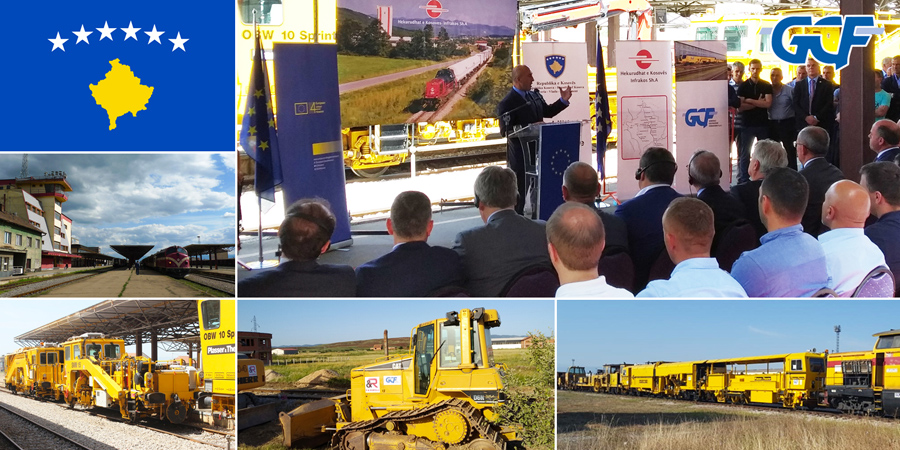 An official ceremony was held at the end of June, attended by the highest political authorities of Kosovo, to inaugurate the railway renewal project, one of the major infrastructural investments of the Balkan region. After a few weeks spent to execute preliminary studies, GCF’s construction site is now fully operational. Within two years, it will deliver a railway to Kosovo, fully rebuilt and truly “European”.

The contract signed in February concerns the reconstruction of Fushë Kosovë - Hani i Elezit line, the Kosovar section of the Rail Route 10 that goes south from the chief town Pristina, until the border with Macedonia. This is the first of the three segments in which the ambitious total renewal project of the central railway line of the Country was divided, with the same number of operational phases, a single track of 148 km that, along Belgrade- Skopje axis, crosses the entire Country from Leshak, near the Serbian border, to Hani i Elezit near the border with the former Yugoslavian Republic of Macedonia.

The section being worked is long approximately 67 km (45% of the entire line) and will be substantially rebuilt and setup for the following phases that, with further tenders, will provide for the electrification, signalling and telecommunications. With regards to the railway armouring, the tender amount assigned to GCF by Infrakos (Kosovo Railways Infrastructure: railway operator) is of about 78 million Euros.

“It is a particularly complex construction site – explains Roberto Accinelli, GCF’s Project Manager – that focuses both on typical railway restoration works, like replacing tracks, slippers and ballasts, and also on civil interventions and works concerning underpasses, tunnels, bridges, stations, along the entire section”.

In the last few weeks, while the preliminary topographic surveys were executed, the operational plans were drawn up and the staff mainly recruited locally was trained on-site, GCF sent numerous machines to the main construction site near the Chief town. A long yellow serpent that crossed the Balkans from Trieste to Pristina, bringing on-site, high-efficiency locomotives, bogies and machines like tampers, profiling, stabilizing machines and also machines destined to civil works: excavators, rollers, lorries, road-track vehicles.

The current line, with single rail and built in the late ´800s, will be substantially rebuilt and made compliant with European standards, allowing to bring the speed to 120 km/h, boost the freight flow with more powerful, heavier and faster trains, and to make the passenger traffic more comfortable. In a single word- as underscored by Kosovar politicians and authorities in the official inauguration ceremony- it must be up to the task that was assigned to it: connect the Kosovo region to the European and international network, contributing to the development of the entire national economy and Balkan area.

Indeed, the structures waiting to be restored by GCF along the Kosovar railway line, are numerous. In particular, 14 bridges with structure in reinforced concrete to re-build, 14 iron bridges to reinforce, 6 bridges that require minor repairs; 6 tunnels to expand and consolidate, 1 tunnel to re-build, 36 railway crossings on gravel or asphalt to replace for an overall length of about 10 km of new road pavement. Permanent safety measures foresee the construction of about 14 km of retention walls and about 3.2 km of wall gabions, on both railway sides. The draining works are also consistent, that concern underground pipes, thirty ducts, and eighty box-type manholes. Lastly, 8 railway stations will be modernized, as well as the stations’ platforms and 5 stops.

With regards to the railway track, renewal will concern the entire length of 66.83 km of the main track, 12.76 km of secondary tracks, for an overall railway length to restore of 79.58 km. The raised section will be re-built first, in order to adapt it to European standards and make it suitable to support a more consistent traffic, then the screed in ballast will be re-built and lastly, armouring will be made using tracks of 60E1 type and beams in concrete B70.

Restored railway as pre-requirement for the Country’s development

The railway renewal works will follow the current track and will reach Hani i Elezit in 24 months, proceeding from Fushë Kosovë. This way, the railway line that connects the chief town to Macedonia and that connects to European Countries on the north, will comply with European safety and efficiency parameters and will be integrated to the international network.

The Government will finance the project through a loan from the European Bank, for Reconstruction and Development (BERS) and through ISPA funds.

“This project has a positive impact not only for the country’s economy, but also for the entire region”, underscored Agron Thaci, Chief Executive InfraKos, to journalists.
The beginning of the works on the Kosovar railway network will be an effective driving force for development, also in the short-term, for local enterprises and employment, thanks to the significant opportunities that GCF will be able to offer to local operators for supply contracts of materials, equipment, services. Moreover, the railway renewal project will create work opportunities for dozens of Kosovar citizens that will be hired, trained and inserted in mixed teams and GCF’s construction sites.