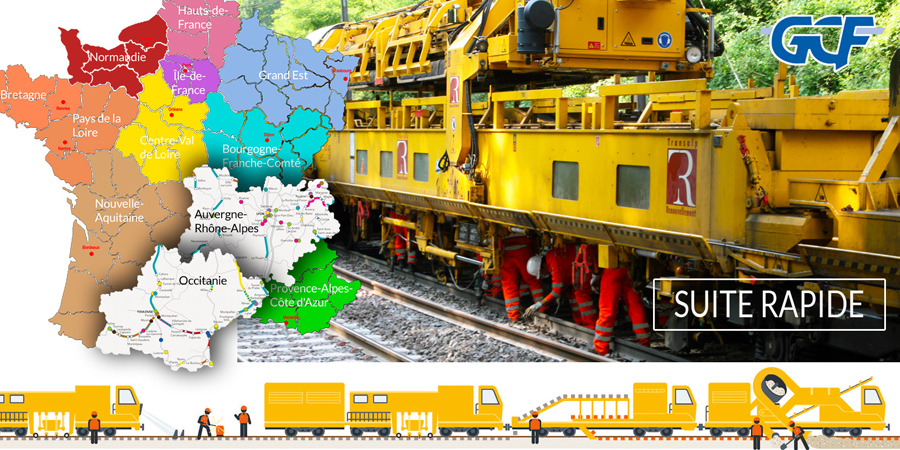 GCF -Transalp Renouvellement Suite Rapide trains are at work, in Occitania and in the Rhône-Alpes region.
The two “quick construction sites”, the last of 2019 for lot 2 and lot 3, will extend the French sections with fully restored tracks for 158 km.

In Portes-lès-Valence and Chasse-sur- Chasse-sur-Rhône, the operational bases for the construction site of Lot 3, the fourth of the year, that will execute the railway renewal of over 70 km of track along 800 000 Givors - Grézan line.
The section being worked, between Peyraud and Le Pouzin stations, includes both tracks of the railway line that runs along the Rhone, fairly parallel to the right orographic shore.

The works, that will be executed during the day, must consider the numerous “peculiarities” of the line that impose the adoption of specific safety measures: the presence of 7 tunnels - for an overall stretch of 3,248 metres - that led to the use of powerful fans and gas and smoke detectors, in addition to the adoption of masks by the workers; 3 viaducts on three tributaries of the Rhone, that will be worked by temporarily suspending the railway traffic; 35 level crossings (21 municipalities and inhabited centres crossed in that areas by the railway) and crossing of the two stations of Tournon and St. Peray where each safety measure was foreseen to ensure the lowest possible impact of the works on the ordinary passengers’ mobility.
“All precautions have been adopted and any aspect concerning safety was considered in details - explains the works manager - in terms of works planning and elaboration of the operating plans, and above all, in training the workers and staff with regards to safety and first aid. Diagnostic and signalling procedures were also foreseen to identify and mitigate the risk of exposure to asbestos that, in view of the building characteristics, the line features in some sections”.

Works during the day and night for the construction site of Lot 2, also the fourth of the year, that has the task to fully restore a double-track section of about 47 km. Here, on the 650 000 Toulouse Bayonne line, GCF’s construction site- train started the restoration works last October 14th, followed two days later by the powerful ballast cleaner C72-2C of Consorzio Transalp.
Goal of the construction site - that for the third year in a row is located in the operative base of Lannemezan during the fall- is to work almost 87 km of track between Muret and Boussens stations, fully replacing the tracks and slippers, in addition to restore the entire ballast screed.
The operating phases are three with day work for the first phase – working on track 2- and night work for phases 2 and 3 that will work on track 1.

The presence of numerous level crossings (in average 1 per km of line) and three sites classified “Seveso” due to the presence of high-risk industrial plants, constitute a reason of particular attention for all organizational and operational aspects related to the safety of the construction site.

“The electric risk is considerable on this line – explains Sabino Carbone - in particular along track 2, since the same poles that support the railway Electric Traction also sustain an electric line above with 63 KV current, which makes particularly delicate any operation and requires the implementation of strict mitigation and safety measures to protect the workers”.
The use of portals of renewal train P95 is, for safety reasons, constantly monitored by “supervisory workers” suitably trained with the purpose to monitor the safety of colleagues.

The works of both construction sites will be concluded during early 2020: March 31st for lot 3 (which will be moved afterwards towards Calais) and March 13th for Lot 2. In any case, by the end of the year, trains and teams of the two GCF-Transalp’s Suite Rapide will bring to 200 their “cursor” of km, reaching the remarkable milestone of 200 km/year of restored railway for each Lot, an amount judged by SNCF as “without precedent” for operating in the “quick lane” of the renewal Plan of the French railway network.