GCF is confirmed leader of the railway sector 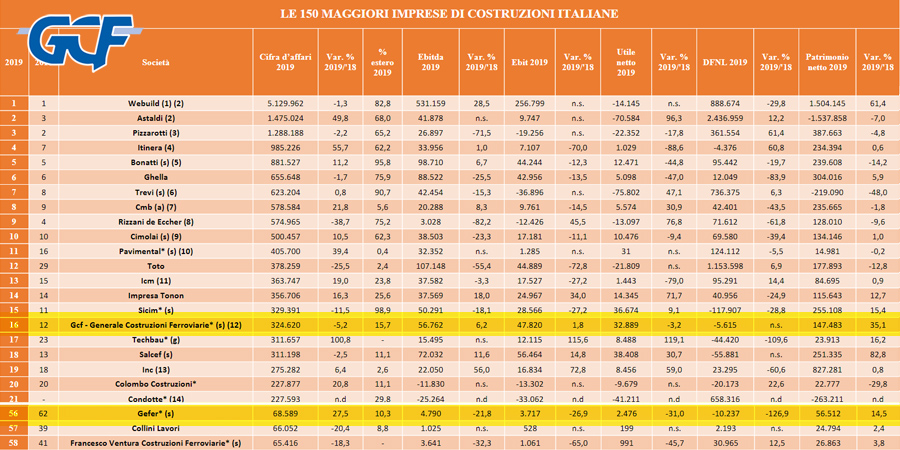 Excellent 16th position in the 2020 classification of the best 150 Italian construction companies published by Il sole 24 ore. The data, processed by Guamari studio, confirm GCF as leader among specialised firms of the railway sector and underscore the optimal performance of Gefer that ranks 56th from 62nd.

The general classification is a proud achievement in view of many corporate events that occurred in the last few months; indeed, it considers the balance sheets and economic-financial parameters of 2019 of Italian construction companies operating in the general and specialist building and civil sectors. A sample that sums in 2019, a turnover of 23.1 billion Euros (over 6%) with a slight reduction of the international quota (achieved by 53 companies) from 49.8 to 44.5% and provides a general picture of the reliability and value of the Italian construction sector that in the past 10 months, has been dealing with the difficult crisis of 2020.

As last year, it stands out the weight of the “foreign component” in the most prime rankings in terms of turnover: an obvious sign that the made in Italy is appreciated across the borders and, as also underscored by “Il Sole”, a sign of a certain “fragility” of the Italian production system forced to be exposed to “foreign risk” due to the crisis of the national market.

With regards to GCF, the production value registered a slight but expected reduction compared to 2018 (from 340 to 324,620 million Euros), with a reduced foreign quota from 21.3 to 15.7% (in a position of “less exposure” compared to the first rankings) and a considerable net profit of almost 33 million Euros: data that confirms the undisputed leadership role of Generale Costruzioni Ferroviarie in the specialist sector of railway installation, electrification and signalling works, able to stand out for the results attained also compared to the main firms and in the higher rankings of the classification.

Gefer’s performances are also outstanding and indeed, in 2019, it has increased the production value by almost 15 million Euros, gaining 6 positions in the classification and ranking 56th, with a turnover of 68,589 million Euros.

Adding the results of the two specialist firms, Rossi Group almost reached 400 million Euros of turnover (393,209 million Euros), ranking 12th as a group in the classification of Italian Construction companies.

“It is a result that rewards the quality of everybody’s work - underscored Edoardo Rossi, GCF’s President, in disclosing the classification to corporate managers and executives - and the commitment of every worker to improve the overall performances of the Group’s firms. I thank everybody, in particular this year that required maximum responsibility and resilience”.

View the classification of the Top 150 Construction companies.