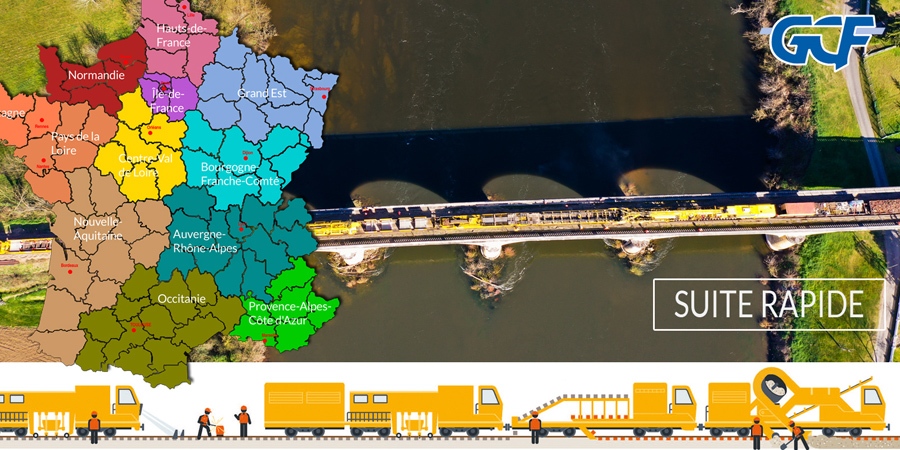 General lockdown due to the coronavirus emergency.

Suite Rapide is also faced to deal with the Coronavirus. Following the emergency declaration by the President of the Republic Emmanuel Macron on Monday evening March 16th, on live TV, and implementing the strong restrictions adopted with the purpose to prevent the contagion, the main French construction sites for railway renewal had to suspend their activity.

For both Lots 1 and 2, Transalp Renouvellement, association of companies with GCF as holding firm, stopped the convoys at the garages, for the first time in years, locking down the renewal trains, ballast machines and high-efficiency machines on the storage yards, while all Italian workers crossed the borders to return home, on-board rental vans – due to the suspension of the flights.

An epilogue that had been felt, despite the “health measures” imparted by SNCF were adopted in the construction sites. Safety distances, frequent hand washing, suitable actions to contain the virus via “droplets” in case of cough or sneezing were implemented by all the employees of Suite Rapide’s “moving workshops”, hoping to be sufficient.

“We are working at full pace - declared last week Sabino Carbone from the Transalp Renouvellement’s French Department- on both fronts of lot 2 and 3. However, the Coronavirus is raising concerns also in France, suggesting to adopt precautionary measures. At Suite Rapide’s construction sites, we implemented all safety measures requested by SNCF and adopted any possible procedure to avoid contagion. However, the decisions passed by the French government ma imply sudden changes of program, like it happened in Italy”.

As it happened with the suspension decreed on Monday and that “froze” the operation of the two Suite Rapide Lots: Lot 3, which was operating in Auvergne since the beginning of January and was almost completed and Lot 2 that, with 50 km of renewed track, only had a few days left to close the first construction site of 2020 and just moved to Île-de-France from Occitania where it was supposed to start the second construction site on Monday night.

This is the situation involving Suite Rapide construction sites, while waiting for the Coronavirus emergency to be contained.

In Occitania, last week, the construction site of Lot 2 Boussens - Muret, along line 650 000 Toulouse-Bayonne, completed the main renewal works, delivering 50,140 metres of restored tracks and 50,153 metres of repaired track. A tamping machine B50 and a profiling machine R21 will be working until Tuesday to provide the final finishes of the track.

In the meantime, from Muret, the convoy consisting of installing Train P95 owned by GCF and ballast machine C75 2C owned by Transalp consortium, had just reached to the North, the new operating bases in Villeneuve-Saint-Georges, MAPO et Montereau-Fault-Yonne, and they were locked down on Tuesday.
The 2020 program foresees the works for line 746 000, in the section between Corbeil-Lessonnes and Melun: about 46 km of electrified railway at 1500V with double track. According to the estimates, the night works were supposed to end by July 18th. Suite Rapide convoy, once it will be operative again, will cross the territory of 8 municipalities, going through 9 stations and numerous railway crossings. About 500 employees that will work at the construction site. Overall, 82,000 tons of ballasts, 77,330 concrete sleepers and 92 km of track will be handled.

With regards to Lot 3, instead, the first construction site of the year was working on line 800 000 Givors-Grézan in section from La Voulte to Pont St Esprit: about 68 km of line with double track that, in addition to numerous criticalities - stations and level crossings, multiple platforms, catenary of height less than 5 metres, numerous and dangerous power sub-stations, etc. - led to the adoption of particular safety measures due to the presence of three “Seveso sites” in La Voulte, where a chemical plant is present, and in Cruas and Pierrelatte which house two nuclear plants. After Monday break, some operating machines (a tamping machine B45 and profiling machine R21) worked until 4:00 p.m. on Tuesday to ensure the proper geometry of the track and screed profile, in order to allow the regular and usual flow of goods and passengers along the section without affecting the speed. Also for this construction site, works were under way all day to store the convoys safely before the lock down while waiting to see how the situation will evolve.

In the meantime, on Tuesday afternoon, two ground levelling operators sent to Matisa will be returning from Switzerland: they were supposed to still follow for three weeks – also subjected to strict medical prevention measures- checking and repair works at Crissier plants and Vallorbe station where tamping machine Matisa B45 was in operation, which was transferred to Switzerland in August after being affected by acts of vandalism.

“Since 2013 when we started working in France with Suite Rapide - underscores with confidence GCF Management, holding firm of Transalp Renouvellement - we dealt and overcame numerous technical and organizational difficulties. It’s in our nature to face challenges and complexities. The current situation was not foreseeable but will be able to overcome it, and we will return to the tracks to do our job”.