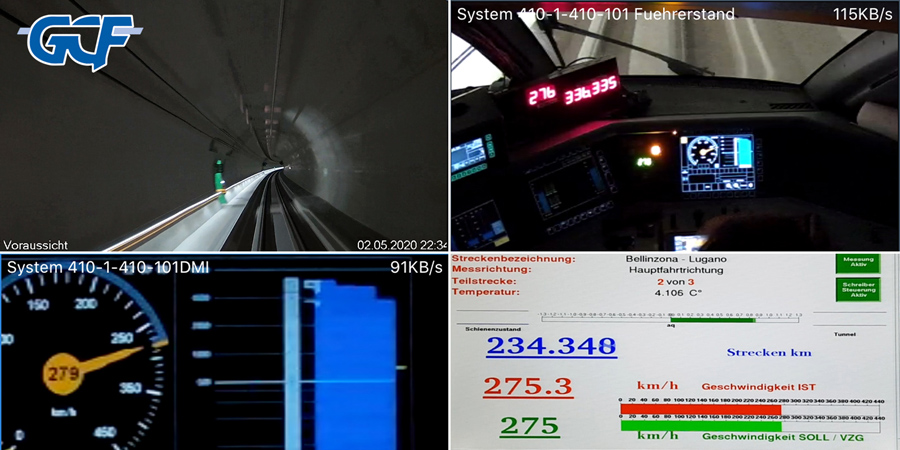 The base tunnel in operation since 13th December 2020.

Positive results for the tests run at Ceneri base Tunnel. As notified by client AlpTransit San Gottardo SA (ATG) during the night between April 30th and May 1st, the special measurement train used for testing run through the two lanes of the tunnel reaching 275 km /hour, “certifying” the technical quality of the railway line.

The result was reached at the end of five intense days of testing, using the high-speed ICE-S measurement train rented by Germany and specifically equipped with sophisticated diagnostic tools.

“After setting the minimum departure speed - explains Eleonora Gasperini, GCF’s engineer - numerous diagnostic parameters concerning travel were detected and analysed every day, in order to verify the absence of problems concerning vibrations, comfort, noise, response of the track at high speed. Then, after checking the absence of parameters “out of tolerance”, we increased the speed of the measuring train day by day, repeating the diagnostic tests”.  We performed these tests for five days, until reaching – during the night between April 30th and May 1st- the maximum speed ever reached, between the two stations of Camorino and Vezia: 275 km /h, meaning 10% higher compared to the future maximum operating speed.

The test in Ceneri base Tunnel was initiated on March 1st by ATG after obtaining the authorization by the Federal Transport Office on February 17th. The dense testing program with high-speed testing lanes in tunnel and connection sections between Bellinzona and Lugano had to be suspended on April 1st, in agreement with FFS, due to the coronavirus and impossibility to ensure the safety distance of two metres in the cabin, between the driver and test manager, set forth by federal safety and prevention laws.
Then, on April 20th, after defining the restoring conditions in agreement with the doctors of the Federal Office of Public Health (UFSP) and appointing a safety officer, ATG notified to be ready to resume the tests.

Other numerous tests at high speed, performed under ATG’s management, will certify innovative systems and technologies in the next few weeks, used for ventilation, signalling, telecommunications and in general, in the construction of railway tunnels, the second greatest project of railway tunnel in Switzerland after San Gottardo Base Tunnel.
Ceneri base tunnel, as set forth by the Federal Council on Wednesday May 20th, will be officially delivered to FFS on September 4th, without the participation of the 650 guests initially foreseen, only at the presence of media representatives. A cautionary measure dictated by the coronavirus emergency that also suggested to hold the meeting of the European ministries of Transport scheduled for 3rd September 2020 in Ticino, through video conference. On December 13th, in view of the adoption of the new railway schedule, Ceneri base Tunnel will finally become operative, completing the section of New Railway Link through the Alps (NRLA), the railway on flat land, that connects North and South Europe at high speed/ capacity.