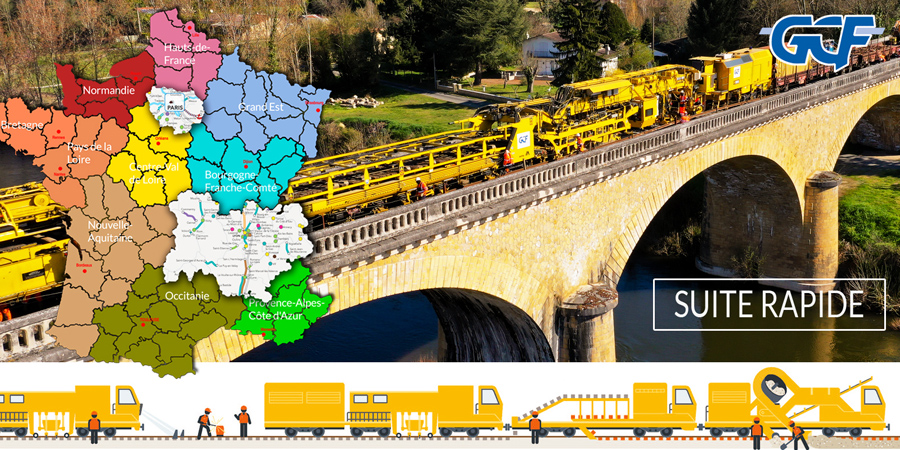 GCF resumes the railway works suspended for the lockdown

GCF’s French “Suite Rapide” sites resume works at full pace after being suspended on March 16th by the lockdown due to Coronavirus. It’s been a few days that the workers and technicians operating on Lots 2 and 3 assigned to Transalp Renouvellement- association of companies led by Generale Costruzioni Ferroviarie- returned to the tracks, resuming their technical tasks in compliance with the new procedures developed to ensure health protection.

“All workers - explains Sabino Carbone from GCF’s French management - were given strict instructions to safely deal with the Covid-19 emergency. Each worker, once he arrived at the site, received a medical kit with surgical mask, hydro-alcoholic gel, safety visors, that will be added to the usual PPE in the next few months. The drivers and managers of trains and machines have received specific detergents and indications on how to sanitize the spaces entrusted to them”.

The works to ensure “safety” at the site are detailed and scrupulous. Each worker, according to the role and tasks performed, once arrived at the site, has received a sort of medical sheet that, according to the particular type of work assigned, describes the general and specific prevention measures developed by the medical team. A handbook containing indications, tips and rules to apply rigorously and responsibly to avoid contagion and protect the personal health and the health of the colleagues, in addition to the ordinary safety practices generally applied at railway sites.

“It is a truly significant effort - continues Sabino Carbone - to be careful and responsible, that we ask everybody to do. Not only at the site, but also after work hours. Many workers come from Italy, stay at hotels in single rooms where their meals are served and where they stay without going home on weekends, at least until airports will be reopened”.

Attention, caution and responsibility. Each worker, properly informed and trained on Covid-19 emergency, before entering the site, certifies through a specific form, to the Company’s Prevention and Protection Service, his state of health (not to be under quarantine, not to have any symptoms, not to have been in contact with people suffering from Coronavirus in the last 14 days), undergoing a daily temperature check and promptly referring to his foreman, any typical symptoms of the viral infection. Moreover, after reaching the work place, each worker implements all the measures foreseen by the specific health protocol developed for his task and permanence at the site, first of all the so called “barrier rules” concerning personal protection and distancing: for each work team, a worker was assigned the single and specific task to monitor the implementation of the rules.

These are the medical protocols applied in view of the resuming of the works at both Voulte and Melun sites, with the attempt to deal safely with the pandemics and combine the production activity with health.

The programs of the two Suite Rapide lots

In the first site of Lot 3, works were suspended just before completing the renewal works along line 800 000 Givors Grézan in the Voulte to Pont St Esprit section: about 68 km of double-track line. In the next few days, both Transalp’s renewal Train P95 and GCF’s ballast cleaner C75 can finally end the works and move to Rennes to begin, in mid-June, the renewal of line 441.000, Rennes-Dinge section.

With regards to Lot 2 instead, works were finally started a few days ago in Île-de-France, on line 746 000, Corbeil-Lessonnes and Melun section: about 46 km of railway electrified at 1500V with double track. The works, executed at night, were expected to end on July 18th. Suite Rapide convoy, with the new Transalp’s ballasts cleaner C75-2C and the new GCF’s train P95, will cross the territory of 8 municipalities, 9 stations and numerous level crossings. About 500 workers will be operating at the site. Overall, 82,000 tons of ballast, 77,300 concrete sleepers and 92 km of track will be handled.