Cutting of the ribbon for Ceneri Tunnel 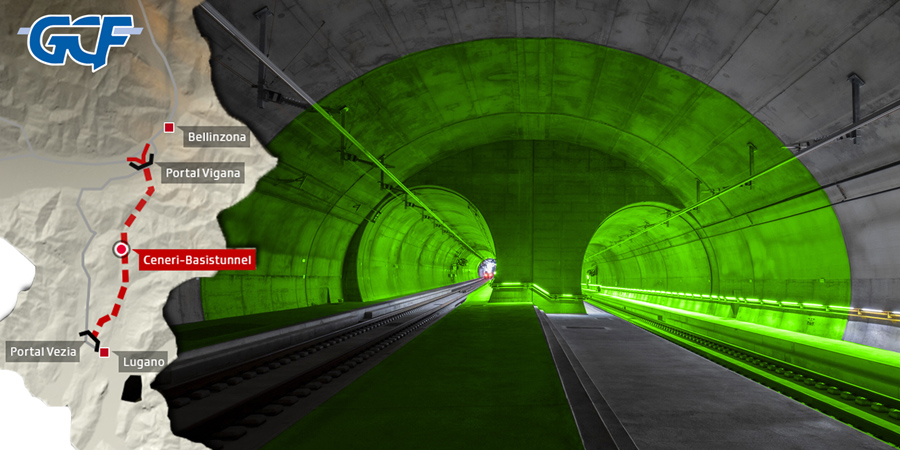 Official ceremony for the inauguration of the new base tunnel

Ceneri base tunnel is officially open. Friday September 4th in Camorino, the highest Swiss political authorities and media representatives took part to the inauguration ceremony that, even if attended by only a few due to Covid-19, has anyhow underscored the strategic importance of the new tunnel, key segment of the Reno-Alps corridor.

‘’The Ceneri will boost our traffic transferring policy’’ stated the President of the Confederation Simonetta Sommaruga in her inauguration speech, thanking the population for having said ‘’Yes’’ to AlpTransit in the 1992 referendum, for the construction of the ‘’project of the century’’. ‘’A daring and far-sighted decision –added the President – for our Country and also for protecting the Alps’’.

Many activities underscored the importance that Ceneri base tunnel has not only for the travellers’ regional traffic but also and above all, for long-distance traffic and freight on national and European scale. A point underscored also by Dieter Schwank, Ceo of AlpTransit Gottardo SA, and Vincent Ducrot, General Director of FFS SA, now official manager of the project, in their inauguration speeches. The federal counsel Ignazio Cassis, in his comment to the media, well summarized the common thought: ‘’With the Ceneri, we underscore our belonging to the European continent’’.

With the inauguration of the Ceneri, indeed, the project of the New Transalpine Railway is completed, a railway on flat land crossing the Alps: the biggest infrastructural project that – approved by the popular referendum in September 1992 with 67% of the people’s consents – Switzerland has ever realized with the purpose to transfer freight through railway and hence boost an environmental friendly policy.

Almost 10 years of work transformed the ambitious project in reality through the main steps of the construction site: from the first official explosion in March 2010 in Sigirino until the delivery of the rough tunnel in February 2017; from the completion of the railway installation on 30th March 2018 with the ceremony of the ‘’gold block’’ until the end of the railway technical works at the end of August 2019.

Now, after over 2,243 test runs carried out from March to the end of August by AlpTransit (40,182 km travelled) to test the optimal operation of all the systems and installations of the new tunnel, FFS will start the test operation that foresees, by December, about 4-5,000 runs of regular trains with travellers or freight on-board.
Then, upon the change of schedule on 13th December 2020, Ceneri Base Tunnel will be fully operational. In addition to Gottardo tunnel (in operation since 11th December 2016), the new tunnel will allow creating a single high-performance railway corridor, hub of the European railway transport on Genoa- Rotterdam axis for which the construction of the third Genoa- Novi Ligure tunnel in Italy, will be essential.

The strategic importance of the New Transalpine Railway (NFTA) is key for induced industrial and tourist development, demographic movements, economic spin-offs, urban and territorial transformation and the economic development of an area that goes beyond the Swiss boundaries.
The overall project, indeed, is to build the most efficient railway connection in the world – about 3,900 km of railway network – in that European strip known as "blue banana", meaning the area that goes from the Mediterranean (Genoa) to the North Sea, going through the English Channel: one of the richest and most populated areas in the word that, with 181 million people, covers the entire North Italy, Switzerland, part of Germany and France, Holland and the United Kingdom: an overall GDP of 7,100 billion Euros.

Some photos of the inauguration day

Photo galleries: construction of the track inside the tunnel

The videos: Railway installation at Ceneri; The ‘’gold block” ceremony