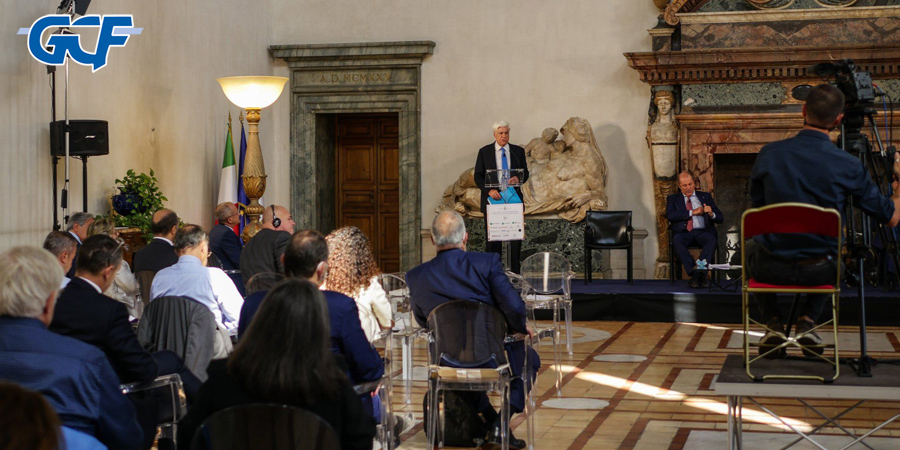 New stimuli from enterprises to favour collaboration and common projects

Italy and France closer and aware to be able to create together, promising prospects for the production sector. The new atmosphere of optimism and joint efforts was confirmed by the recent 4th Italian-French Forum of Family Enterprises that, upon IREFI’s initiative, gathered in Rome over 80 representatives of big enterprises - among which GCF – public and private bodies and institutions of the two Countries.

The interests at stake are many and extremely important, starting from the actual possibility to revitalize and further boost the commercial exchange between two neighbours that registered a considerable volume of 94 billion Euros, in 2020, withstanding some frictions in their geo-political relations.

“With Draghi’s government, the relations between Italy and French are now excellent; the road to further strengthen the economic bonds is not based on protectionism or contrasts between nations but the union of talents because French and Italian talents, combined, are able to obtain excellent results” explained Fabrizio Maria Romano, President and co-founder of Irefi (Institute for French-Italian Economic Relations), at Palazzo Farnese, seat of the French Embassy in Italy. “The remarkable resources implemented by Next Generation Ue – added IREFI’s President – could further strengthen the economic relations between Italy and France, however we need men able to create these gangways, contacts, bridges, and to create links between the two countries”.

“Since many years – commented Alessandro Rossi, GCF France’s President – GCF sees France as a privileged country for investments and entrepreneurial commitment. We shall praise and actively take part to each initiative that, as the recent Forum, aims at strengthening the relations with France and define a structured picture where to agree on proposals, promote development projects, accompany entrepreneurial actions. A strong union makes us stronger: it is a positive element and a growth and development factor for all enterprises”.

The importance of the role of firms and entrepreneurial models focused on cooperation and development of common projects was the fil rouge of numerous interventions that, in different work sessions, deal with current themes: the European ecological transition and sustainable finance as tool of the same transition, the expected impact of the National Relaunching and Resilience Plans and concrete opportunities for French and Italian companies: IPCEI (that stands for Important Project of Common European Interests), already positively tested in various innovative sectors and the new French-Italian chains in the sectors of infrastructures, energy efficiency, environmental sustainability, artificial intelligence, hydrogen and space.

In the background, for all Europe, the need to deal with competition – Chinese competition characterised by the presence of more capitals, and US competition, which counts on 2,000 billion dollars of post-Covid aids launched by President Biden. In perspective, on the other hand, the forthcoming completion of the process to sign the “Quirinale’s treaty”, a project that aims at defining a formal and regulated plan pursuant to which it is possible to easily develop collaboration projects between Italy and France, in particular in the industrial and cultural sectors.

“I think everybody is aware - underscored Andrea Munari, BNL President - that working together creates the conditions to grow better, quicker and in a more sustainable fashion”.

Working together to overcome inevitable resistances is, in brief, the Forum’s message: “We count on the union of talents – summarised President Romano to the press - to improve the relations between the two countries because economic protectionism, as it often occurs in France and Italy, may block the fluidity of the relations”. Despite the failed alliance between Stx and Foncantieri, there are many positive and exemplary cases of successful partnerships: like those developed by Luxottica and Stmicroelectronics, the cross-border investments of Campari and Lavazza in France, and Lvmh and Bnp Paribas in Italy.