With Gefer, the lathe reaches the train 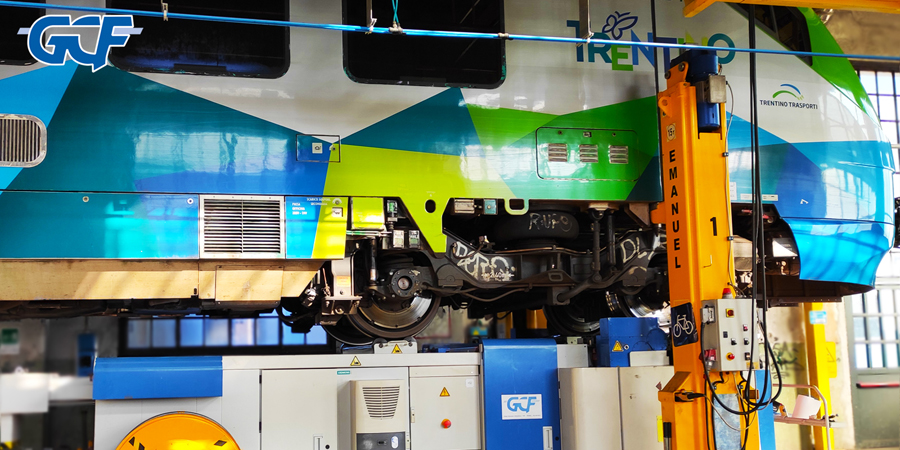 Mobile lathe in operation for turning services at 0 km

7 trains in just 6 days. In Trento, at the railway workshop of Trentino Trasporti, GCF-Gefer’s intervention with “MobiTurn” mobile lathe allowed to provide turning to the rolling stock, on-site. A quick service, at 0 km, that significantly reduced costs and times.

The maintenance works of Gefer team are carried out at the railway workshop of Trento, where Trentino Trasporti has convoyed one by one, stopping them only once day, 7 of its “Minuetto” trains that needed work due to evident wear of the wheels.

Designed in Turin by Italdesign, built and generally maintained by Alstom, the “Minuetto” – trains in blocked composition consisting of three boogies (the motor boogie, the central and the end boogie) with 8 total axles and weight of about 54 tons – underwent maintenance services on-site instead to be sent to a turning centre equipped with a pit, as generally occurs, or alternatively, be dismantled to be sent to the axle lathe.

“In this case – explains Walter Andolina, Gefer’s technician in charge of maintenance – by saving time, the trains were sent one by one to the local railway workshop and, once raised through the powerful lifting columns owned by the same railway workshop, the mobile lathe was run on the track and the wheels were turned”.

An innovative procedure that MobiTurn, Gefer’s mobile lathe, is able to implement not only on narrow-gauge axles (1,000 mm) but also on regular gauge axles, as in this case (1,435 mm).

The turning activity with mobile lathe was introduced by Gefer about three years ago in order to provide directly, quicker and with lower costs, to the periodical maintenance of the large machine fleet of Rossi Group. Varied components such as locomotors, high-efficiency operating machines, boogies and wagons: if we put them in a row, we can obtain a convoy of 18,137 tons, on 625 axles, long over 10 km. Over time, the turning maintenance service attracted the interest and was extended to third parties, in addition to GCF’s sites.

Gefer’s mobile lathe, that can be transported on lorry, can operate at workshops and also on equipped yards with tracks. In this case, the maintenance team is able to lift the rolling stock thanks to the 8 powerful mobile columns that are enabled by electronic units and able to operate in synergy, each one lifting up to 35 tons.

Read also: the “baptism of the lathe in Sacile”

Photo Gallery: The turning service in Trento for “Minuetto” trains of Trentino Trasporti.