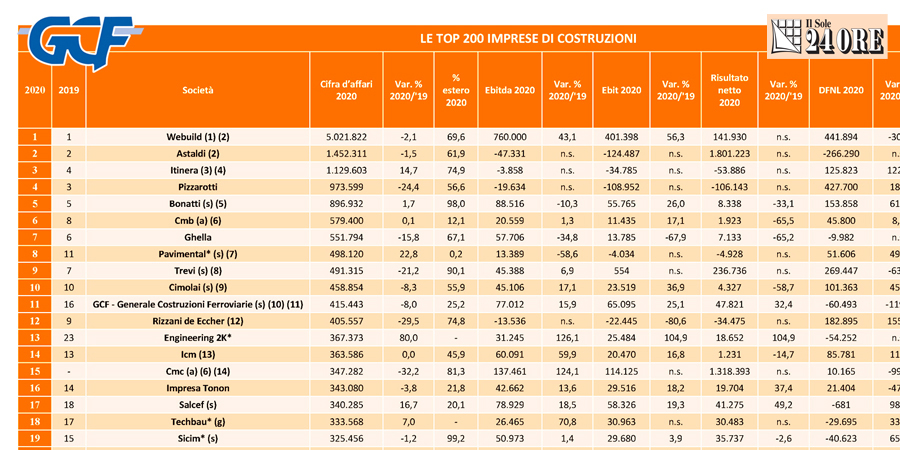 With a proud performance, Rossi Group’s railway companies rank five positions higher and, despite the year was marked by the pandemic, were able to attain the 11th position in the 2021 classification proposed by “Il Sole 24 ore” for the 200 top national companies in the Construction sector.

Elaborated by research firm Guamari and mentioned in recent days on the economic paper “Il Sole” by analysts Aldo Norsa and Stefano Vecchiarino, the 2021 Report on the Italian Architecture, Engineering and Construction Industry (176 pages, that can be downloaded from www.guamari.it) traces the overview of the building sector during the annus horribilis 2020 “marked by temporary closures of construction sites in Italy and abroad, with damages not sufficiently compensated by public re-openings”.

The classification traces an image in HDR (High Dynamic Range), as we would say in photographic jargon, because it shows a wide range between the light and dark areas of the building sector. Evident contrasting colours. Starting from the substantial performance of the system that was able in 2020, to contain within 2%, only the losses of total profits (23.9 billions), but saw on the other hand, 26 companies (13% of the companies in the classification (in red, with losses of over 300 million, sign of a deep crisis).

In this picture and on this dark and light “background”, the result attained by GCF and Gefer combined, stands out in Rossifin’s consolidated balance sheet: with a production value of over 415 millions, they do not only rank 11th in the classification that considers building companies operating in the general and specialised construction and civil, sectors, but they also consolidate the leadership role of Rossi Group, top builder in the specialised segment of railway installation, electrification and signalling.

Not only. Among the Top 200, GCF and Gefer are reviewed by Il Sole’s analysts among the “most performing” companies of the sub-group of the “78 companies that declare an active net financial position”, “performance” classification led by Sa-Fer with 125.6 millions, followed by Gcf - Generale Costruzioni Ferroviarie with 60.5 millions, by Engineering 2K (54.3 millions), Sicim (40.6 millions) and Cogeis (40.4 millions).

“This classification – underscored Edoardo Rossi notifying the result to the corporate managers and executives – sees us in an excellent position, a truly important result thanks to the commitment and contribution of each of us. I thank all of you for the work performed in a really difficult but important year”.

Among the growth and consolidation “steps” made by the Group, there are the high investments also in the last 12 months, in high-efficiency operating machines to boost the fleet consisting of over 670 machines, adding new tamping, profiling machines, ballast cleaners, renewal trains and more.

The investment and acquisition strategy perfected by the Group has been important in the last year, to consolidate its leadership and boost its competitiveness. Like the acquisition of Delcourt Rail in France last fall, a top company of the homonymous group (230 employees and 41.5 million Euros of turnover) and, in June 2021, in Italy, of the majority shareholding of 60% of Cenedese, a company from Treviso (120 employees, 20.5 millions in turnover: also ranking in the Top 200 classification, at the 185th place); lastly, a few weeks ago, the acquisition cross-ocean of Platinum Track Service Inc., a railway company operating in Canada for 40 years, employing 80 workers with a turnover of 17 million dollars.

The Rossi Group - six branches in Italy and 8 in Europe - today has 1400 employees, a fleet of first-class machines in Europe, active yards, in Italy and abroad, in the main segments of railway works, from track construction to maintenance, from electrification to signalling.