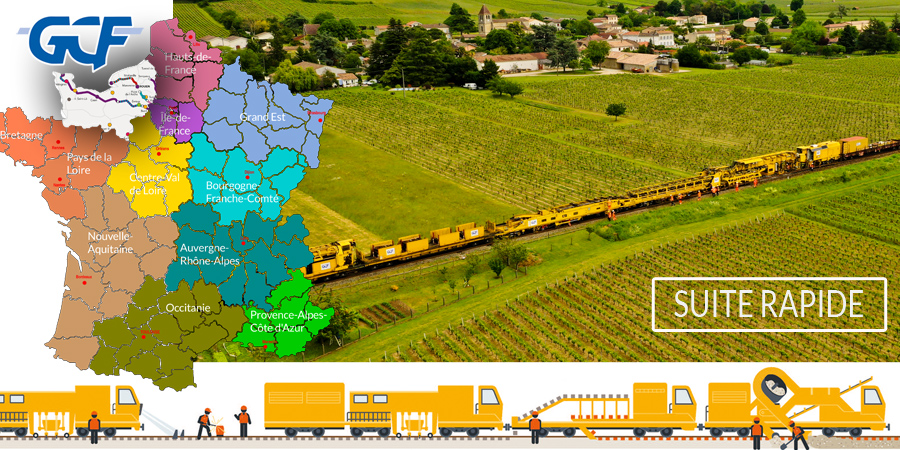 The 5th Suite Rapide site at work in Normandy

Suite Rapide at work, in Normandy, in the Seine- Maritime district, to renew the extremely important line 340 000, the railway that connects the French capital with Le Havre, second French commercial port, after Marseille, and 9th European port in terms of handled containers.

GCF - Transalp Renouvellement railway site, the fifth in 2021, has been putting to work Matisa P95 renewal train since June 28th that, in combination with Matisa C75 2C ballast cleaner, are fully replacing the track (rails and sleepers) and restoring the ballast screed.

Many risk factors along the section: 9 railway stations, the presence of numerous level crossings, the existence of 21 “blue zones” (railway section along which the catenary is lower than 5 metres from the tracks’ surface, therefore the electric risk is particularly high), the proximity of about ten electric-substations near the tracks being restored and consequent risk due to potential “current return” phenomena.
And also, mainly in Le Havre suburbs, the proximity of 16 plants classified as “Seveso” and other 14 production areas considered “at risk”, therefore bound to strict safety regulations.

Hence, the mitigation measures set forth by the meticulous Safety and Health protection Plan are particularly detailed, which describes the conduct rules and operating methods such to ensure the workers’ safety on the place of work and, at the same time, limit discomforts for travellers at stations under works and hazards for drivers at the level crossings. Additional precaution measures were implemented to check the means and braking devices along the entire section characterised by a continuous slope of 12 mm/mt towards Le Havre and to execute the renewal and restoring works on some viaducts considered engineering works of particular value, like Mirville viaduct.

The works will be concluded in early September.

In the meantime, in Ardenne district (Grand Est region), GCF’s Matisa C75 ballast cleaner is at work in the site managed by ETF (Eurovia – Vinci Group’s railway branch) to renew line 205 000, between Charleville-Mézières and Joigny sur Meuse. For about a month, the ballast cleaner, equipped with auxiliary carriages, Wacs/Falns, a crew of drivers and operators and a maintenance team, will work in synergy with ETF renewal train, restoring a track section of 10.2 km.

For the site, operational during the day with the railway traffic suspended, is expected to work an average of 510 metres/day.