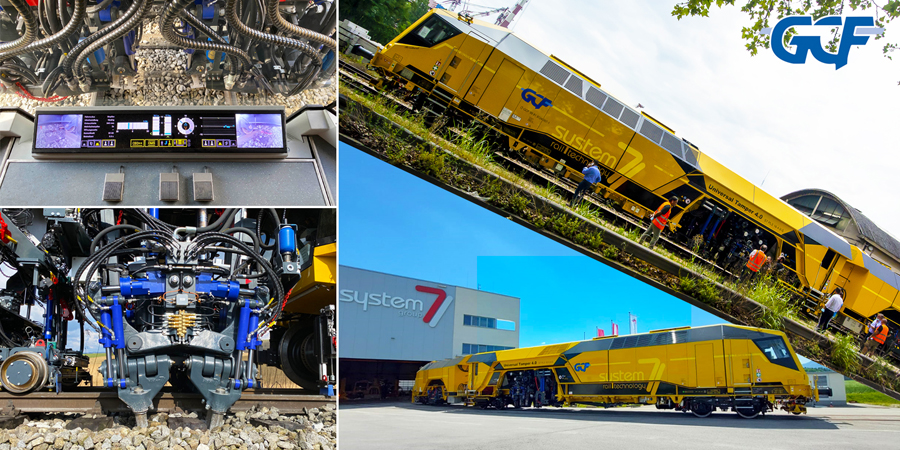 New innovative and high -efficiency operating machines have been delivered in recent weeks, to GCF’s Italian railway maintenance sites. They will add to Generale Costruzioni Ferroviarie’s fleet – which is already counting on over 670 machines – further boosting GCF’s and Gefer’s operating capacity, in particular, in the strategic segment of railway maintenance.

Universal Tamper Machine PLS 16 4.0 was the first to cross the national borders, immediately seen at the Austrian border and posted on social media by some followers, a line and junction tamper machine that embodies the best technological innovations of last generation. Fourth model produced in Austria by System7, it is an absolute novelty for Italian tracks, able to revolutionize the ridging process.

“The heart of the machine – explain the builders to System7 – consists of a ridging bench enabled by a completely hydraulic system. The motor vibrates only when the hammers penetrate the ballast and stop when special pressure and position sensors register optimal compacting for each cylinder. The outlet with deactivated hammers allows not to slow down the compacting state and, consequently, to obtain a high quality and more durable screed”.

PLS 16 was equipped with many advanced solutions, such as for example, the inert measuring system that – inspired to aviation- allows measuring the track’s geometry independently from the vibrations produced from ridging, hence with absolute accuracy and precision. The machine, featuring a constant monitoring system of its components, is able to automatically perform the entire ridging process, not only checking the conditions of the gravel beforehand in order to calibrate the activity, but also providing a continuous monitoring flow of the infrastructure, loading the track’s map on the web with the relative ridging data and images of each sleeper. In addition to technology 4.0, important sustainable innovations contribute to reduce dusts (-50%) and noise (-7dB).
Photos and technical details on Universal Tamper Machine PLS 16 4.0

The three profiling machines PS 2015 manufactured instead by So.Re.Ma’s Tortona site are already operational in GCF’s national sites like Matisa’s 20 R21L “colleague” machines. The New Sorema featuring 2 central ploughs that can be used in both directions and 2 lateral ploughs for platform profiling enabled by a simple joystick are powerful and of consistent weight. Simple and user-friendly man-machine interface, driving comfort, connection to remote server for the constant monitoring of the machine, reduction of dusts thanks to the powerful nebulization system are the peculiar characteristics of the New Sorema PS 2015, high-efficiency machines that ensure excellent work performances, reaching 15 km/h in profiling and 6 km/h in brushing.
Photos and technical details on New Sorema PS 2015

Investments and “numbers” relating to maintenance

The segment of the ordinary and extraordinary railway maintenance is an important aspect of the investments and operational commitment of GCF, in line with the key goals of European and national policies aimed at developing sustainable mobility by boosting High-Speed and above all, the use of existing railway infrastructures.

The works portfolio of Rossi Group for the three-year period 2021-2024 counts on the recent contract awards and renovations with regards to the North-East lots (Milan-Verona-Venice and Trieste) and North West lots (Genoa, Turin, Florence and Bologna) for a total of approximately € 781 million in the railway superstructures sector alone.

In the last 10 years, the Group’s companies provided in Italy, the maintenance of over 12,000 km of railway lines thanks to a powerful and high-efficient fleet of operational machines that counts 7 ballast cleaners, 29 tamper machines, 5 stabilizers, 23 profiling machines.

The acquisition of operating machines, locomotors, works trucks, welders, carriages and loaders involved an investment of about 20 million Euros in the last 18 months. Moreover, the orders for the delivery of an additional 3 tamper machines, 4 loaders, a new locomotor and 9 specialised means in the Electric Traction segment amount to about 25 million Euros.

The segment of Electric Traction maintenance also counted on considerable investments to boost the fleet of specific means that today features 2 concrete mixing trains and since last April, 5 tensioning trains.