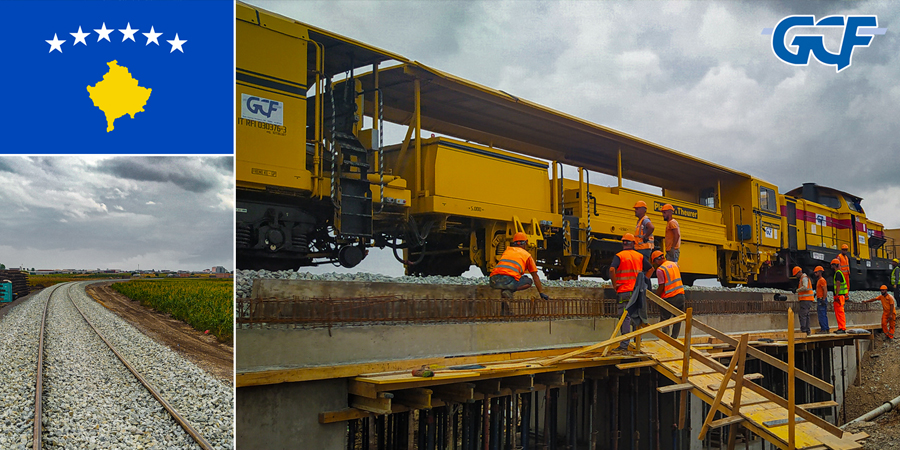 The re-construction works will be carried out by GCF, in Kosovo, also with regards to the section of Rail Route 10, the central railway line that connects the country with Serbia to the North and Macedonia to the South. In recent days, Infrakos has officially notified to the Management of Rossi Group, the assignment of the second lot: a contract of the value of 47.9 million Euros for the re-construction of the railway section between Fushë Kosovë and Mitrovica.

“It is an important contract – states Edoardo Rossi, president of Generale Costruzioni Ferroviarie – that involved high-profile European and extra-EU companies; it is above all, a project that the Authorises of Kosovo consider vital, a turning point for the development of the entire country. We are aware of it, even more so after working two years in Kosovo, therefore we are very proud to be able to offer our skills for the economic, social and environmental growth of this region”.

GCF’s work in Kosovo began in February 2019, with the awarding of the 78.6 million euro contract for Lot 1 concerning the Fushë Kosovë - Hani i Elezit section towards the Macedonian border: 67 km of line (45% of the Kosovar section of Rail Route 10), that had to be fully restored. A complex project – today over 50% completed – that consisted, in addition to typical railway armouring works, of civil works and interventions to re-build underpasses, tunnels, station bridges.

The signing of the contract concerning Lot 1 in February 2019

Indeed, the section that involves lot 1 and 2, that from Hani I Elezit reaches Fushë Kosovë to continue North towards Mitrovicë, constitutes the first railway line of Kosovo built 147 years ago, in 1874. It still carries the extensive, visible damages suffered during 1990-1999. Damages that were only partially repaired and, consequently, led to strong limitations to the trains’ circulation, including the reduction of potential loads and maximum speed allowed: 60 km/h in average that is reduced up to 20 km/h along the many bridges and tunnels, for safety reasons.

The re-construction, as it stood out from the works on lot 1, presents many criticalities, such to require the assistance of KFOR (International military force guided by NATO) and KSF (Kosovo’s first-aid), also specialised in civil protection actions and, in particular, removal of bombs and neutralization of explosive devices still present along the track.

“Right now - specifies Land surveyor Raffaele Forcella, Deputy Project Manager – while waiting to begin the works on the second section, probably in early 2022, we are compiling the operational plans to maximize and optimize the exchange and implementation of staff, machinery, workers on the two lots. A construction train and additional tamping machines, profiling machines, locomotors, track-road vehicles, excavators will be brought to our operational base in Miradi, which already features a large machine fleet".

With regards to the staff, as it took place in recent months, specialized workers and machine operators will come from Italy, while additional labour will be hired on-site for non-specialised works.

The works foreseen for lot 2

Official beginning of the works of lot 1, in September 2019

“While waiting to begin the works - explains Construction Manager Engineer Michele Blardi – we are accurately scheduling the works foreseen in order to bring the new section up to European standards”.

Works that, as foreseen by the project approved by Infrakos, are expected to deliver in 15 months, fully re-built, 34.4 km of main railway line and 9.1 km of tracks and switches in the stations, and to restore about 18 km of road network, parallel and transversal to the line (service roads or roads featuring the current 32 railway crossings).
“An important project - underscores Engineer Blardi – concerns the 16 existing bridges - many in steel, some in masonry - which must comply with inter-operability standards and Eurocodici and STI requirements: some, through suitable reinforcing measures and most, through demolition and re-construction . Similarly, numerous hydraulic works will be executed along the track, in addition to 52 underground channels”.

A specific “restoration” project will concern 5 stations (Mitrovice, Vushtri, Druar, Prelluzhe, Obiliq-Kastriota) and 5 stops (Frasher, Pantine, Vernice, Mihaliq, Plemetin) present along the railway segment where, in addition to the restructuring works to the buildings, 16 passengers’ docks must be re-built or constructed from scratch, of length ranging from 150 to 200 metres, featuring roof and benches, ramps, stairs and access underpasses, railway crossings, loading platforms, underpasses, passengers’ areas (ticket offices, washrooms, waiting areas) and accommodation areas for the staff. Special attention will be paid to the main station of Fushe Kosove, where the restructuring works – internal and external – will concern the station’s building (with conference room and auditorium) and also the adjacent technical and administrative offices, where different types of interventions will be carried out.

Corridor X is 252 km long, 148 km cross Kosovo along the North-South Leshak – Hani i Elezit axis. From Kraljevo (in Serbia), through Lapovo, it reaches Belgrade; to the South, in Macedonia, from Gjiorche Petrov, it reaches Skopje. Its integration in the eastern European/ East Mediterranean corridor (Rete Ten-T, asse 4) will allow to connect the Balkans with Austria, Greece, and Bulgaria.