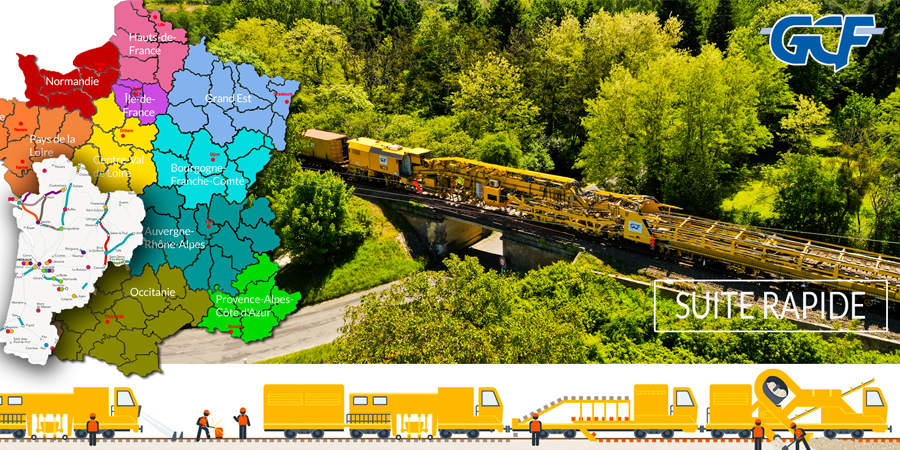 at work among forests, with extreme focus on the fire hazard.

In new Aquitania, along railway line 655.000 that connects Bordeaux to Irun, on the border with the Basque country. Fifteen days ago, GCF – Transalp put Suite Rapide in operation that, in Gironde, is working on the sixth site of the year to restore almost 40 km of track.

Starting from Talence station, city with 40,000 inhabitants at the southern suburbs of Bordeaux, Suite Rapide, GCF-Transalp’s mobile workshop, will restore the railway section in the next weeks that reaches the small municipality of Lamothe to the west, before turning south towards Irun.

Along the double-track section, the site will execute the planned works in two large phases: the replacement of the sleepers and renewal of the ballast screed for a section of 38,904 metres, the total restoration of the track (ballast, sleepers and tracks – the latter replaced with 50kg/mt track) for a length of over 15 km.
The works started on track 1 from Talence (progressive km 4,595) until Lamothe (progressive km 37,762) and, in a few weeks, will proceed backwards on track 2 from Biganos (progressive 28,506) until returning to Talence, just before the Christmas holidays.

The night works, that will be performed from 8:30 p.m. to 5:45 a.m., will take place mostly without interruption of the railway traffic on the adjacent track, adopting a coded series of safety and surveillance measures by sight that will signal the arrival of the train and will avoid the risk of collisions in case of intense railway traffic.

Attention measures for Health and Safety

The operational methods and behavioural rules to observe at the 9 railway stations involved by the works are described in details in the Safety and Health Plan, in order to ensure the safety of the workers and, at the same time, limit potential disservices to passengers and avoid creating hazards, especially in the train access areas.

But this Suite Rapide’s site will focus mostly on another risk factor: fires.

New Aquitania, as known, is the first French Region in terms of wooded areas with 2.8 million hectares of forests mainly consisting of maritime, resinous and particularly flammable pines. 747 fires occurred a few years ago, 90% caused by men’s negligence that destroyed over 3,000 hectares of woods.

Hence, local authorities and GCF-Transalp’s safety managers are paying utmost attention to the fire hazard and, in compliance with local laws and in collaboration with SNCF and competent authorities, elaborated particularly strict protocols. Also in view of the fact that most of the railway section being restored is located just outside the urban neighbourhoods of Bordeaux suburbs, inside the national regional “Landes de Gascogne” park.

For this reason, site’s vehicles and machines, like locomotors and excavators, were equipped with an anti-pollution kit and also fire extinguishers of power in line with the vehicles. Obviously, every work phase that involves a fire hazard is checked and must obtain a specific permit from the authorities.
Moreover, all works are performed under the supervision of a safety manager who monitors and supervises every phase in order to identify and immediately eliminate any outbreaks. This section being restored is also subject from time to time to a final check in order to ensure that no potential fire hazards are present along the railway platform.
Lastly, all site’s employees have been properly trained with specific training courses about prevention rules to observe at the site and actions to implement if required.

Lastly, all provisions implemented for Covid-19 remain in effect at Suite Rapide’s sites: the face masks, the “barrier” signs, the use of sanitizing gel, “Vigi-Covid” supervision, a professional figure that coordinates and checks the application of said measures. All the Italian workers hired by GCF-Transalp feature green pass (obtained with two vaccine doses), a “passport” that will become mandatory in France on October 15th, for all the employees of Italian firms.