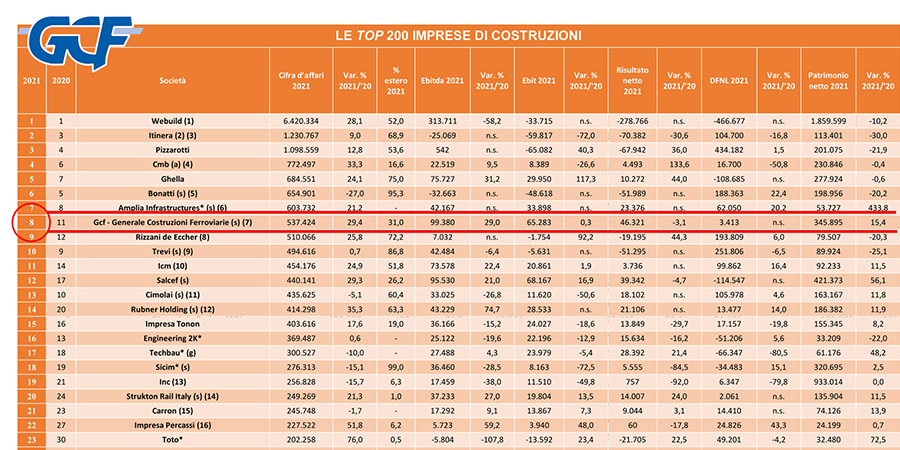 GCF-Gefer is at the top of ranking as specialized firma

GCF climbs in the Top 200 ranking of Italian builders, the benchmark ranking for the business world compiled annually by Studio Guamari and commented in Il Sole 24 Ore.

With a production value that stands at 537 million, GCF not only confirms - as it has for years now - its leadership role among railroad specialists, but also enters the shortlist of the top ten Construction Firms (it was 11th last year) earning 8th position overall.

This is an excellent performance for the Rossi Group (the ranking consolidates data of Gcf's and Gefer's railways), which also has some specificities compared to the generally positive picture drawn by Il Sole's ranking.

"In 2021," state the ranking authors Aldo Norsa and Stefano Vecchiarino, "after the abrupt slowdown imposed by the pandemic, the top Italian construction companies have found their way back to recovery. The top 200 firms included in the ranking (general and specialty) had a total turnover of 26.7 billion, marking an increase of 18.7 percent compared to 2020."

However, they report in the columns of Il Sole 24 Ore, it is a chiaroscuro picture that emerges as, on average, some of the leading indicators have decreased: ebitda (by 15.1 percent) and ebit (by 36.1 percent). Indicators that basically concern the wealth produced by companies ("earnings before interest and taxes") and that, on the other hand, in the case of Rossfin (the Rossi Group's holding company) are confirmed to be positive in 2021 as well, attesting to an overall increase in the value of the Group's businesses.

The Rossi Group - six locations in Italy and eight in Europe - has about 1,400 employees and a fleet of more than 640 operating machines capable of covering every segment of the railroad with versatility and efficiency. Gefer's and GCF - Generale Costruzioni Ferroviarie's railways operate in Italy and abroad, in the main segments of railway works, from track construction to maintenance, from electrification to signalling.

In recent years, the group's growth strategy has reinforced investments aimed at strengthening competitiveness and leadership thanks, among other things, to the acquisition of railway companies in France, Italy and Canada.