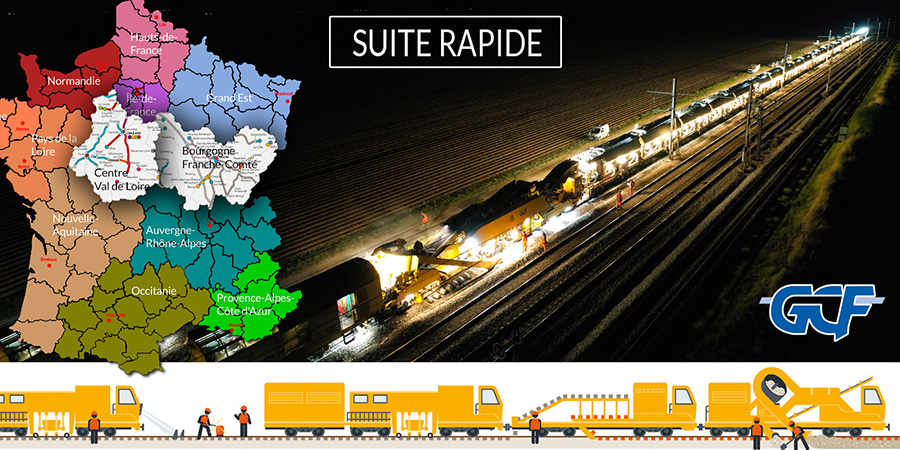 Night work on the Lyon - Moret

On a section of about 58 km, along the 750 000 Lyon - Moret line, crossing the two French regions of Burgundy-Franche-Comté and Centre-Valley of the Loire, GCF-Transalp's Suite Rapide launched on Monday, December 5th, the important new "fast site" in Montargis.

The start of the new rail renovation site follows closely on the heels of the completion of the works conducted by Suite Rapide in Auvergne Rhône-Alpes concerning the renovation of three French rail routes - the Grenoble - Saint Egrèves line 905 000, the Saint Paul Les Romans - Moirans, and the Valence - Saint Hilaire-Saint Nazaire lines (sections, both, of the 908 000 Valence-Moirans line): works started on August 1st and were completed on December 1st with the delivery of 55,285 metres of renovated railway by the Matisa P95 site train and 40,599 metres of ballast rehabilitated by the powerful Matisa C75-2C.

The Suite Rapide site in Montargis

The new Suite Rapide site will now take care of a 58-kilometre section of the 750 000 Moret - Lyon line, a section between the Montargis and Neuvy-sur-Loire stations. The line, which runs parallel to the course of the Loire on the orographic right bank and then turns sharply northward near Gien, is double-tracked and electrified at 1500V (from Moret to km 120+300) and at 25000V from there to Lyon.

The "mobile factory" will replace the existing rails (type 50 and 46 kg) with new rails (50 kg), consolidate or replace the sleepers, and restore the ballast. Three work phases are planned, covering 43 km of completely renovated track.

Two equipped operating bases will be in operation at the construction site. The main one, at Saincaize station, where the P95 renewal train and the C75-2C tamping machine will be stationed and where the old and new sleepers, old rails, waste soil, and new ballast will be stored; the second at Gien railway station, available for stationing and maintaining small rail vehicles, as well as for storing and loading the new ballast.

In addition, at the railway stations of Nogent sur Vernisson and Chatillon sur Loire, areas have been carved out for the stationing and maintenance of "minor" rail vehicles such as ridging and profiling machines.

It is precisely the need to locate the main base of operations in Saincaize that entails for SNCF and GCF-Transalp, a compelling logistical and organizational commitment. The station, in fact, is 85 km from Neuvy-sur-Loire-the nearest work point-and 149 km from Montargis: an hour and 36 minutes by road. "The site trains leaving the Saincaize yard," explains Sabino Carbone for GCF's French management, "have to deal with this long daily transfer route at predetermined and necessarily strict times so as not to impact rail traffic. All it takes is an unforeseen delay of a SNCF train to hinder the arrival of the site train at the work site or, in the morning, to postpone the return to the site, with a domino effect on all procedures, works and maintenance." Every effort, assures the management of the Transalp Renouvellement Consortium, has been and will be made, from the point of view of logistics and work organization, together with SNCF, to ensure in any case, as far as possible, effective responses to all eventualities that will arise, in order to ensure compliance with the timetable for the execution of the works.

Finally, as usual, scrupulous procedures have been laid down in the site's Health and Safety Plan to regulate work in the vicinity of the many level crossings that affect the section being worked on so as to avoid hindrances and risks to car traffic; likewise, in the various stations, ad hoc procedures have been laid down to be adopted in the presence of the passenger platforms to minimize any inconvenience and distress to people.

Strict behavioural norms and possible signalling and evacuation measures have, in addition, been planned to deal safely with works in the vicinity of the 5 "Seveso sites" located adjacent to the railway line being worked on. Particularly monitored were the works in the vicinity of the two Seveso sites bordering the EDF nuclear power plants of Belleville and Dampierre, both operating with, respectively, 2 and 4 pressurized water PWR reactors.