The COGI application enables NeuRAIL to monitor the respective longitudinal displacement of the two jointed rails continuously and in real-time, with the primary objective of detecting incipient or total damage to glued insulated joints in a timely manner. In practice, it enables remote, continuous, real-time measurement with micrometric resolution of the strains that, over time, affect Glued Insulated Joints - in particular, the ovality of the fishplate holes produced by the cyclic action of dynamic loads and temperature excursions and the consequential ungluing of the joints - thus enabling early detection and intervention in the presence of abnormal strains and misalignments that are often the cause of rail accidents.

INSTALLS QUICKLY: thanks to anchoring with high-strength magnets, a single operator can install the sensors in minutes, even on joints in operation

PREDICTIVE: using continuous measurement, behavioral abnormalities with respect to the normal operating state can be isolated

DYNAMIC: the measurement range can be recorded as needed 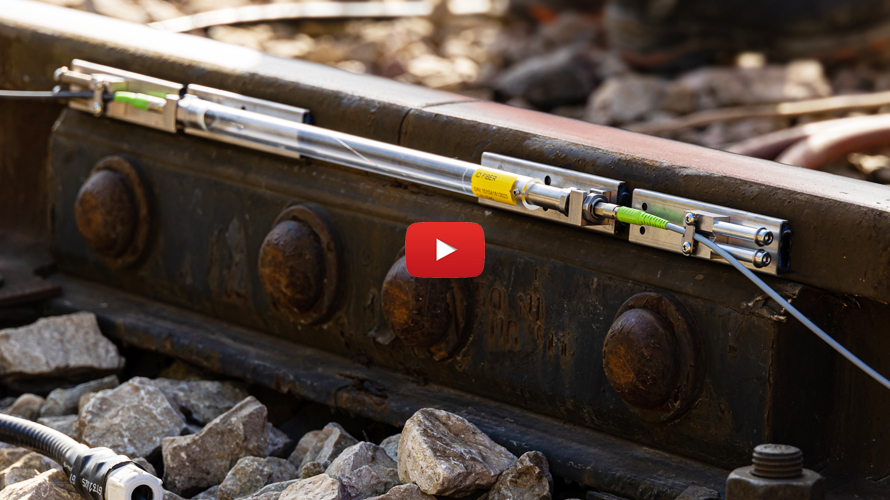 further information: how does cOGI work

COGI is a passive optical device that requires no power supply and, fitted with magnetic anchoring systems, can be quickly applied to any type of rail. Using two plug-and-play connectors, it is connected to an ad-hoc-developed diagnostic framework which, from a remote server or cloud, enables uninterrupted monitoring of the joint opening at a frequency on the order of kHz and with a resolution on the order of microns. In this way, COGI allows the identification not only of ungluing in the classical sense but all movements and micro-movements of insulated joints.

COGI's core, its sensitive part, consists of an optical fiber filament fitted with a Bragg grating specially prepared by Diamond SA; the grating transforms the fiber filament into a precision optical-mechanical transducer. In addition to the sensor, the company provides the connector cables using low-loss connectors designed to withstand harsh environments and maintain a high degree of protection. The longitudinal mechanical tensile/compression strain to which the optical fiber is subjected induces a geometric change in the grating that, in turn, changes the reflected light's wavelength. In this way, the diagnostic software can accurately and repeatably calculate the strain incurred by the fiber, compare it with changes normally induced by temperature variation, and ascertain when a standard level of normality has been exceeded.

Designed as per RFI's technical and functional specifications, tested and certified in the laboratory, COGI has been tested and validated in the field for months by accredited certification bodies.

In particular, Ferrovie Emilia Romagna (FER) promoted the installation of COGI and the conduct of field validation tests at the Crespellano station railway facilities on the Casalecchio-Vignola line (km 12+579), where seven glued insulated joints were identified and monitored with COGI. Specially developed software collected data transmitted by COGI for three months while, in parallel, FER personnel continued to conduct periodic visual inspections. An instrument with a sampling frequency of 1 kHz and a wavelength resolution of 8 pm, corresponding to a minimum spatial resolution of approximately 10 microns, was chosen for the experimentation.

Two particular stress tests were conducted concurrently to test the compatibility and ways in which COGI reacts and, so to speak, "discerns" the passage not just of trains but even rail vehicles devoted to track and ballast maintenance: in this case, also, the COGI sensor continued to read the joint strain during and after tamping operations without incurring damage, interruptions or being displaced to an extent so as to exceed alarm thresholds.