GCF’s story in the construction of new railway lines began in the 1970s when the company played an important role in building the first sections of the direct Rome-Florence line.

Since then, GCF has ranked constantly as a leader in the construction of new railway infrastructures, always keeping pace with the latest technology and even designing and building a special machine (La Meccanica) exclusively for rail track construction.

With our technology and tools as well as the know-how and technical skills under our belt we have faced the new challenges of High-Speed trains: over a third of the national high-speed network in Italy runs on lines and tracks set up by GCF.
In Italy over the last 15 years, about 1,300 km of High-Speed/High-Capacity lines have been installed from Turin to Milan and as far south as Salerno. The construction of east-west lines between Genoa and Milan and Milan and Trieste is also envisaged.
GCF has made its own significant contribution through high-speed construction projects on the Florence-Bologna, Turin-Novara, Novara-Milan, Rome-Naples and Treviglio-Brescia lines.

Construction of conventional lines included projects to double and quadruple tracks, as well as upgrades and redevelopment of existing lines. New railway sections were implemented by GCF on the Bologna-Verona-Brennero, Bologna-Padua and Milano-Genoa-Ventimiglia lines.

The quality and speed with which we carry out services make GCF outstanding.

It is just the right supplier and partner with which to carry out integrated projects on a European scale.

Construction activity is also intense outside Italy itself.

For many years by now, GCF has “exported" its work methods, organisational models, machines and qualified personnel to countries such as Turkey (doubling the Ankara-Sincan line), Morocco (Casablanca-Marrakesh) and Switzerland (Monte Ceneri tunnel).

In urban contexts and large metropolitan areas, major infrastructure projects have been completed in which GCF has built several sections of metro lines in Rome, Milan and Turin (Turin-Lingotto).

In the often highly challenging and innovative Urban Transport sector, GCF is currently handling two major projects in Denmark: the Cityringen Metro in Copenhagen (a light-duty loop around the Danish capital) and the Aarhus Letbanen project for a fast, light-duty tram in the heart of one of the most densely populated cities in Denmark. Inaugurated on 11 December, alongside the introduction of the 2016-2017 winter timetable, the new Treviglio-Brescia HS/HC line is a continuation of the existing Milan-Treviglio line as far as Brescia Central Station. The section is 58.2 km long, of which 39.6 km HS/HC as such; it crosses 20 municipalities in the provinces of Milan, Bergamo and Brescia and joins the Brescia railway hub through the Brescia Ovest link (about 11.7 km) and the subsequent urban section (6.9 km).
Electric traction is 2 x 25 kV AC at a frequency of 50 Hz. This double line has Vignoles UNI 60 E 1 standard gauge tracks (1,435 mm) welded electrically, with pre-stressed concrete 260 cm sleepers weighing 400 kg at intervals of 60 cm and Pandrol flexible mounts. The space between the tracks is 5 metres.
The line is electrified at a voltage of 2 x 25 kV AC at 50 Hz between Bologna San Ruffillo and Florence Castello stations. On the remaining section and along interconnections, power supply is 3,000 V DC. 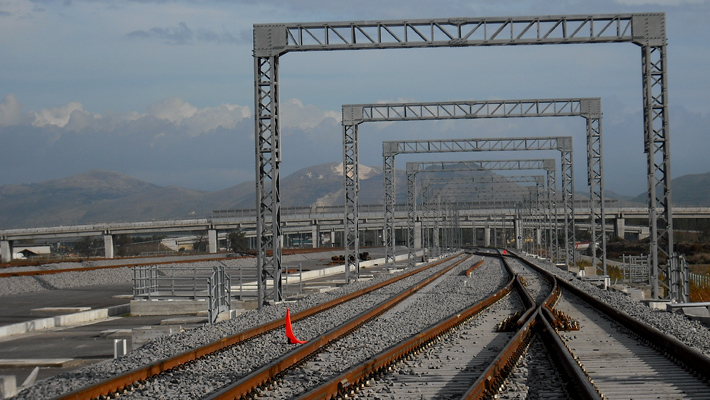 The “train distancing" system is based on the new ERTMS/ETCS (European Rail Traffic Management System/European Train Control System) “Level 2”, for inter-operability between European railway lines. In particular, the installation comprises a Ground Sub-System (SST) that communicates with the train (On-Board Sub-System, SSB) via a dedicated GSM network to manage movement authorisations. 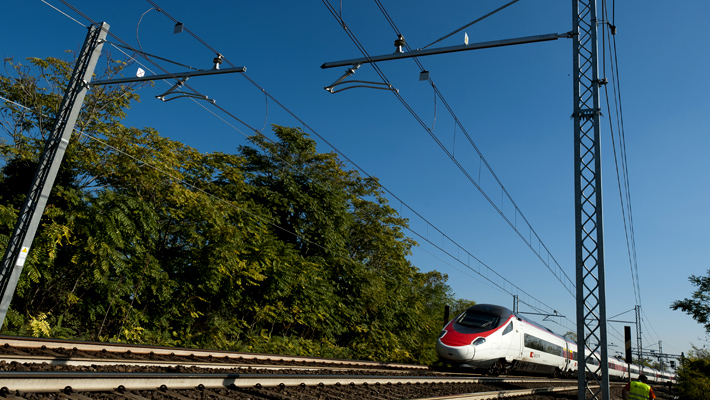 The “train distancing" system is based on the new ERTMS/ETCS (European Rail Traffic Management System/European Train Control System), the new standard for inter-operability between European railway lines. The installation comprises a Ground Sub-System (SST) that communicates with the train (On-Board Sub-System, SSB) via a dedicated GSM network to manage movement authorisations. The line consequently comprises several radio block sections made up of by the most common track circuits. 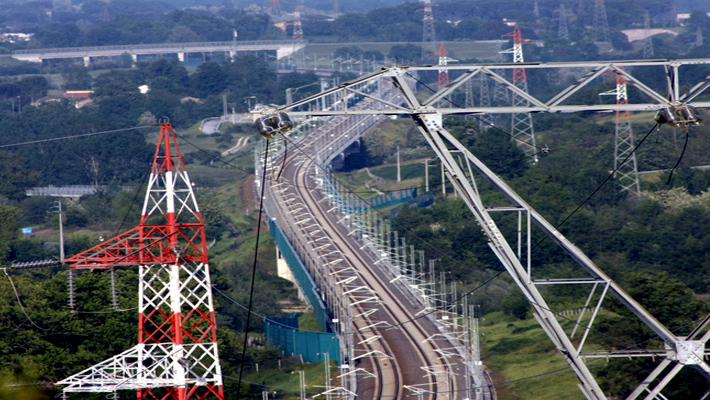 This double railway line has Vignoles UNI 60 E 1 tracks welded electrically with Pandrol flexible mounts. The PM Salone – 1st Gricignano Crossroads section has 260 cm pre-stressed concrete sleepers weighing 400 kg at intervals of 60 cm. The Gricignano–Casoria trunk line has FS type 230 and FS type 260 sleepers. The track gauge is 1,435 mm.
The minimum radius of the curves is 5,450, the space between the tracks is five meters and base speed for the project was set at 300 km/h.

Electric traction is 2 x 25 kV AC at a frequency of 50 Hz. Power is supplied by five electrical sub-stations (SSE) located near Anagni, Gallicano, San Giovanni, Salone and Vairano Patenora. The three interconnections with the Rome-Naples line (via Cassino) and the terminal interconnection with the Naples-Foggia line are electrified at 3 kV DC.

The “train distancing" system is based on ERTMS/ETCS “Level 2” technology. The system uses a dedicated GSM network to manage train movement authorisations. The line consequently comprises several radio block sections. Thanks to this system, the line is inter-operable, i.e. it allows circulation of European high-speed trains. Dual tunnel with rail tracks on a concrete platform.

This project - together with the St. Gotthard tunnel (57 km, the longest in the world) - is part of the New Railway Link through the Alps (NRLA) as the new rail connection between Southern and Northern Europe passing through Switzerland (Gotthard ridge).
The High-Speed/High-Capacity line will allow maximum speeds of up to 250 km/h.

GCF S.p.A. is proud to be involved in this new railway project, unquestionably one of the most important in Europe.
For this type of project, GCF has developed an innovative construction system for tracks with a concrete platform that exploits special concrete filling supply and casting systems.
This ensures highly efficient logistics management, despite the significant complexity of access and manoeuvring in the tunnel. Construction works on a new line on the north side alongside the existing line between Ankara and Sincan (Turkey).
Work was carried out between April 2011 and January 2013 on behalf of TCDD (Turkish Railways) to adapt the line to high speed trains (160 km/h).

Construction project for a new line also including infrastructure works (excavations, bridges, underpasses, drainage) and the superstructure (track construction, supply and installation of 59,945 m3 of ballast, installation of 24 points). The project involved the reconstruction and renewal of the double track Kosekoy-Gebze line as an integral and particularly important part of the Ankara-Istanbul high speed corridor.

In addition to complete full renewal of rails, sleepers and crushed stone, the new catenary system was installed, as well as the signalling and telecommunications plant.

In this way, the section was upgraded to a speed of 160 km /h - the standard defined by the European Community for trans-European freight networks, thereby consigning a safe and modern line to the Turkish Railways.