The metro is almost always considered to be the cornerstone of integrated urban transport systems.

Travelling speed, high transport capacity in terms of passenger volume and low environmental impact are the main reasons behind a rapidly expanding market, even in countries where this sector has traditionally not seen significant investments.

At the same time, traffic congestion in major cities encourages the development of important projects to create or upgrade fast light-duty rail systems, as well as tram networks and especially trolley-bus/tram systems characterised by greater manoeuvring flexibility in urban congestion.

In recent years, important development projects in France and Denmark have seen GCF S.p.A. as a reliable provider and partner thanks to its organisational and operational skills as well as its machinery and equipment capable of ensuring fast, high quality execution.

GCF S.p.A. operates with highly qualified personnel having specific training in relation to the characteristic features of each individual site. It also uses “light-duty” machinery capable of combining site performance with respect for environmental conditions necessary in city centres and project timing. 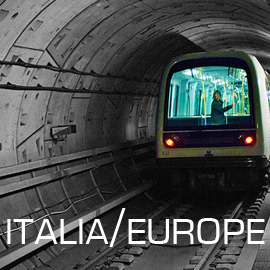 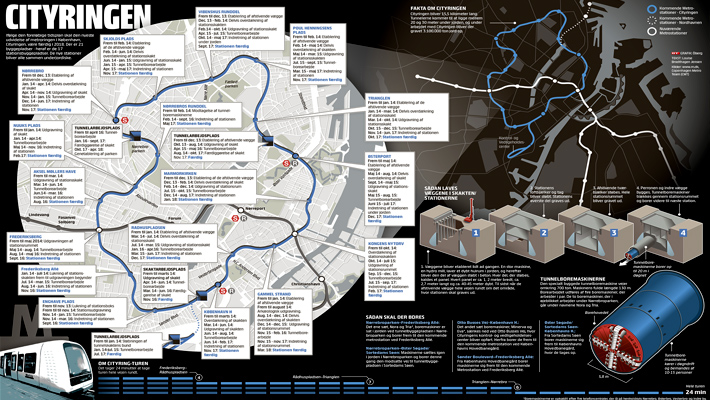 As a specialist sub-contractor for the Ansaldo Group, GCF is involved in the construction of the track and service track for the Cityringen Metro - Line 2 in Copenhagen.
The loop track runs around the city centre entirely in a double-barrel tunnel. It is 17.4 km long - equal to 35 km of track - and envisages the construction of 17 new stations. In this way, Line 2 integrates with the already operative previous Line as its natural expansion. This is the first time that an Italian company has worked on such a project in Denmark. Over and above laying tracks on a concrete base, GCF is also handling the installation of third rail used for electricity power supply.< /p>

Numerous critical aspects had to be tackled and overcome in the operational stage: work in tunnels at a depth of 25-30 m; the presence in the city centre area of many historic and other buildings of artistic-architectural value and the resulting need to operate with stringent environmental criteria to minimise noise, dust and vibrations. Lastly, logistics management for procurement and handling of machinery and materials in the city centre was also rather complex.
Work began in September 2014 and will be completed by the end of 2017. 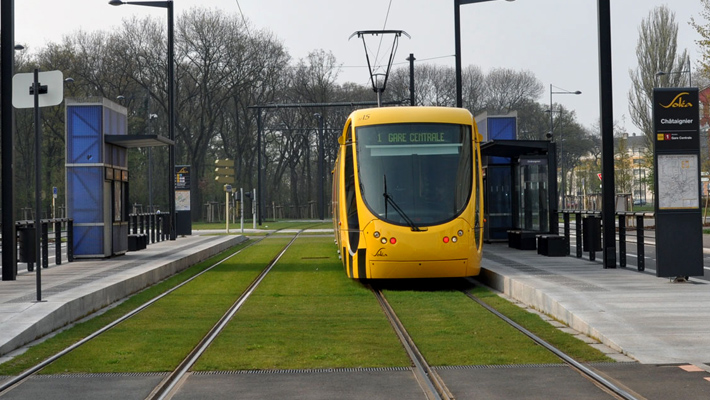 In a consortium with Ansaldo and Stadler, GCF is taking part in the construction of the first fast tramway line in Aarhus, the second largest city in Denmark.
The project involves the renovation and electrification of about 100 km of regional railway line and connections to 12 km of new double track line serving the most densely populated part of Aarhus: Aarhus Central Station, the University Hospital Centre and the urban development area.
The completion of the first work stage - started in 2014 - is planned for 2017. It will provide the city with 110 km light-duty metro lines serving 51 stops.

The line is installed on a mixed base of crushed stone/concrete to allow transit by passenger trains (up to 100 km/h) and freight trains.
The project is considered particularly important not only in terms of urban traffic decongestion (catchment area: 1.2 million people) but also in environmental terms: it is estimated that the new Light Rail Transit (LRT) system will help achieve an annual energy saving of 47GW and a reduction in CO² emissions of 7,300 t every year. 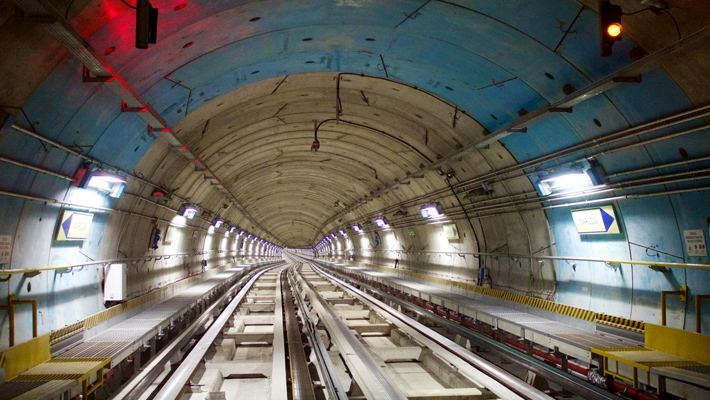 This is the first automatic metro system in Italy. GCF S.p.A. built the extension from Porta Nuova Railway Station to Lingotto Fiere, which was inaugurated in September 2011. The section is entirely in tunnels, on an “undulating" route for a total length of 7,400 metres serving seven stations. The track was laid on a concrete platform using specific, purpose-designed machinery for this type of vehicles and platform.

GCF sites set up for construction work were located near the wells of several main line stations, affecting densely populated urban areas and having to overcome numerous complex situations of a logistical nature, in particular as regards supplies of line construction materials.

The automatic metro is based on technology developed by SIEMENS RAIL Systems and envisages so-called VAL convoys fitted with rubber wheels sliding on steel profiles acting as rails. This type of train makes it possible to optimise the route and reduce vibrations and noise, as well as ensuring regular and safer traffic.< /p>

The VAL system used for Turin Metro is the first in the world with a 52 metre configuration and a capacity of 440 seats. The interval between two convoys can be reduced to two minutes at peak times, thereby increasing passenger capacity which on average is 15,000 passengers/hours in each direction of travel. 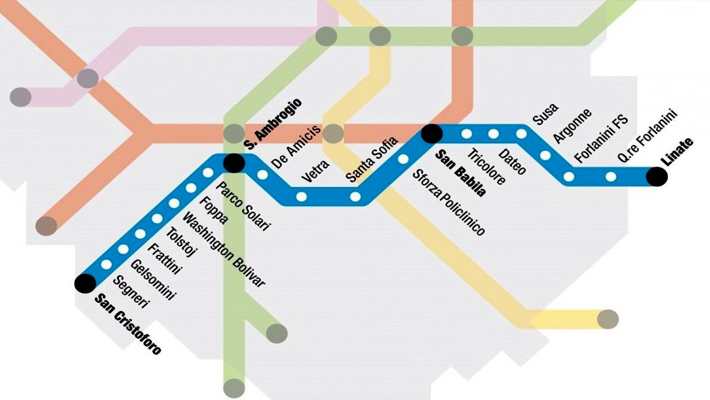 On behalf of Astaldi S.p.A., GCF performed modification and renovation work on lines that were temporarily closed during the construction of Metro Line 5 Garibaldi - San Siro.

The new M4 Line under construction will connect the city from the East with the Linate Airport terminus, and to south-west with the San Cristoforo terminus.

It will be fully automatic and equipped with platform doors, which means that the entire system will be controlled from a single place in the depot. The high frequency of trains (90 seconds) will ensure hourly capacities of 24-28,000 passengers in each direction of travel. Given the dominant colour used in the décor of the 21 stations and the trains, as well as in the maps, the M4 Line is also called the “Blue Line". 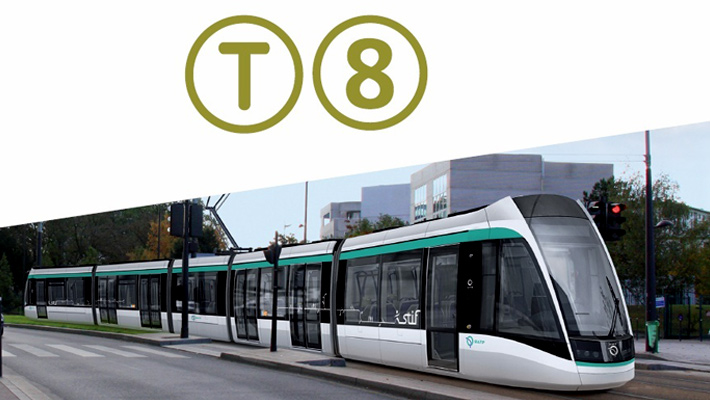 Given its configuration, it is known as the “Y Tram". The T8 tram line has two branches connecting Saint-Denis - Porte de Paris with Épinay-sur-Seine and the university town of Villateneuse, to the North, linking to the South with the M13 line station of the Paris Métro.

The infrastructure project commissioned by Ratp, was implemented by GCF in a consortium set-up with Esaf and Laforet. Generale Costruzioni Ferroviarie, in particular, handled infrastructures on about 18 km of tracks and points following anti-wear and anti-screech treatment.

The particular location of the construction site, in a densely populated residential area characterized by significant high urban traffic, necessitated the implementation of strict organizational measures in order to ensure total compatibility of works with the urban context.

Logistic and organizational protocols were developed to minimize the impact of material procurement and machinery handling operations involving action on site incoming and outgoing flows and the work techniques employed.

Similarly, technical and organizational measures were adopted to reduce pollution involving dust, gas and noise, as well as achieve maximum vibration reduction.
Lastly, steps were taken in advance over the entire length of the line to ensure physical protection of trees with masks to safeguard them against the possible effects of shock caused by mechanical equipment..

This line is a particularly important junction for the network of connections in the Paris area.
The T8 line was opened to traffic in December 2014 and is now fully operative. The line has 17 intermediate stops starting from the M13 Terminus in Paris, reaching Epinay-de Champagne in 22 minutes and Villetaneuse University in just 14 minutes.
It currently handles traffic totalling 55,000 passengers per day: about 16 million a year.