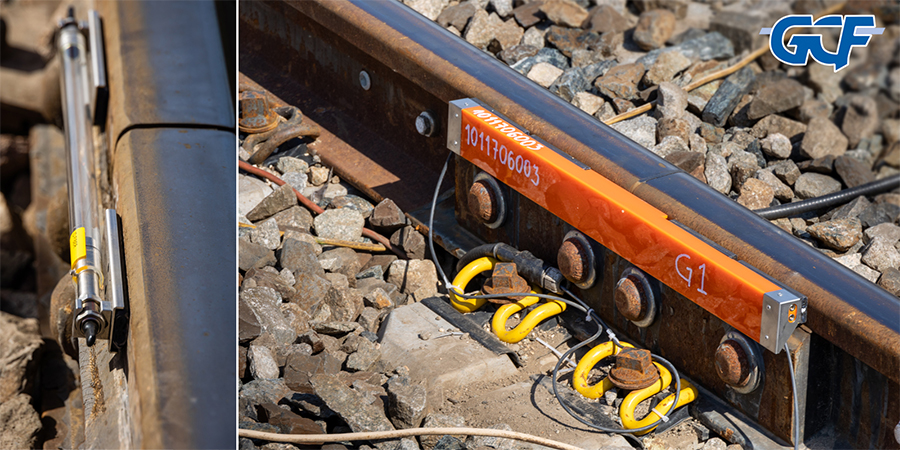 Safety means optical fibre. Also in the railway sector. COGI, the system developed by GCF’s Research and Development Department for the Optical Control of Insulating Joints aims at radically innovating techniques and procedures to monitor the Insulating Joints glued to the tracks, one of the weakest features of the railway infrastructure.

The innovative system, unique in its kind, designed according to RFI’s technical and functional specifications, tested and certified in the Laboratory and therefore, verified and validated on-site for many months by accredited certification bodies, it is currently patented and ready to be implemented on railway networks. It allows to measure remotely, with continuity and in real-time, with micrometric resolution scales, the deformations that occur overtime to the Glued Insulating Joints - in particular the ovalization of the holes of the jaws produced by the cyclical action of dynamic loads and thermal excursions and consequent detachment of the joints – thus allowing to identify and promptly intervene on anomalous deformations and misalignments that often cause railway accidents.

A relevant quality breakthrough in terms of safety, considering that the identification of potential joint failures is entrusted to visual checks by maintenance operators, that may induce into errors.

“COGI – explains engineer Marco Renzetti, of GCF’s R&D Department – is a passive optical device featuring magnetic anchoring systems that allow to quickly apply it to any type of track. Through two plug-and-play connectors, it is connected to a troubleshooting framework developed specifically that, from remote server or in cloud, allows to constantly monitor the opening of the joint, at a kHz frequency and with micron resolution, thus it is able to identify not only the typical detachment but all movements and micro-movements of the insulating joints” 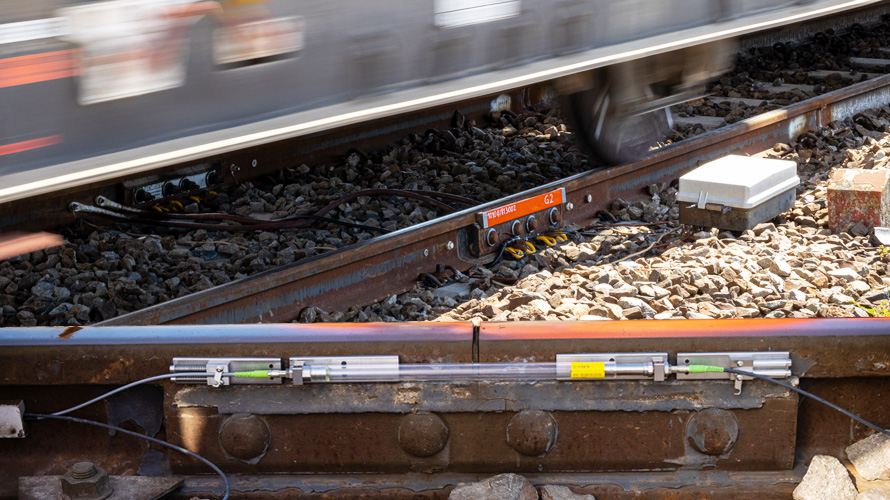 COGI: how it works

COGI’s core, its sensitive part, consists of an optical fibre filament featuring a Bragg mesh specifically prepared – upon GCF’s design and patent – by Diamond SA, which transforms the fibre filament into a precision opto-mechanical transducer. The same company manufactures, in addition to the sensor, the fitting cables using low-loss connectors designed to withstand hostile environments and maintain a high protection level. “The traction/ compression longitudinal mechanical deformation that undergoes the optical fibre – explains Elisa Duca, engineer of GCF’s R&D department – induces a geometric variation of the mesh that, in turn, causes a variation in the wave length of reflexed light. This way, the troubleshooting software can obtain the fibre’s deformation in an accurate and repeatable manner, compare it with the variations generally induced by temperature changes and verify when a normal standard level is exceeded”.

In recent months, Ferrovie Emilia Romagna promoted COGI installation and the execution of validation tests on-site at the railway complexes of Crespellano station, along Casalecchio-Vignola (km 12+579) line where seven Glued Insulating Joints were found, monitored with Cogi: “For three months – explains Engineer Ilario Febi, of GCF’s R&D Department – a software specifically developed has collected the data transmitted by Cogi while, at the same time, the regular visual inspection activities conducted by FER’s staff continued. For testing, a tool was chosen with sampling frequency of 1 kHz and wave length resolution of 8 pm, corresponding to a spatial minimal resolution of about 10 micron”. Two particular stress-tests were carried out at the same time, to test the reaction modes, hence COGI’s “discernment” modes were tested, at the transit of trains and also of railway means that carry out the maintenance of tracks and screed: “Also in this case – continues engineer Febi – COGI’s sensor continued to read the deformation of the joint during and after the tamping operations without any damages, interruptions or movements such to exceed the alarm thresholds”. 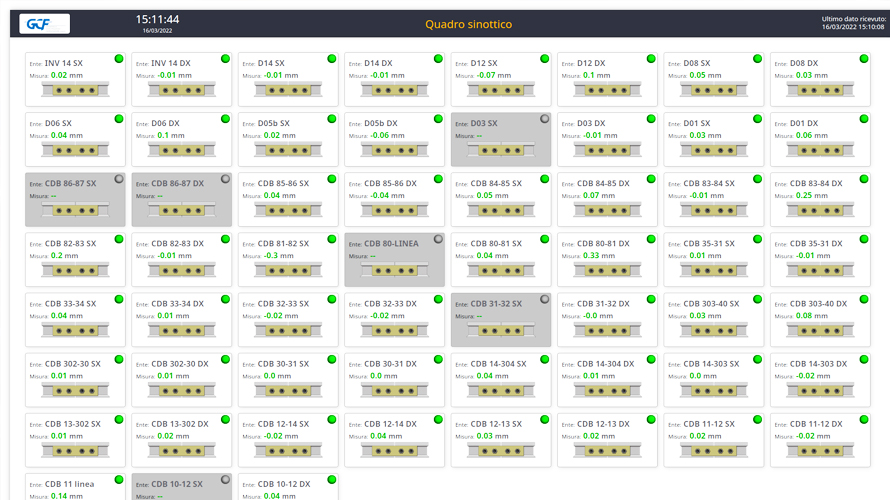 Above: in the monitor screen, in the operating room, the real-time data related to the state of all the joints of a given area monitored with COGI.

While we are finishing the procedure to extend the patent internationally in extra-EU countries, the innovative GCF’s troubleshooting system will be also installed on a section of 7 km of Oleggio – Bellinzona. “The testing – comments engineer Renzetti – has demonstrated satisfactorily that it is currently possible to measure reliably, constantly and remotely, the condition of a high number of Glued Insulating Joints from a control room, gathering useful statistic data to boost the efficiency and efficacy of visual inspections”. For example, thanks to the resolution of COGI’s sensor, to the measurement and sampling range guaranteed by the system, it will also be possible to determine the ovalization process of the jaw’s holes that triggers the failure of Glued Insulating Joints. Moreover, it will be possible to manage an automatic alarm system that- based on set thresholds- will transmit alerts via email, sms, or push messages to one or more safety officers.

GCF’s R&D Department – with its executive staff – is working to develop a prediction algorithm that can further implement COGI’s features in monitoring the safety of the railway infrastructure.

Engineer Elisa Duca concludes by stating “COGI offers many advantages: it is reliable, precise, quick to install and configure, cost-effective, completely passive, it does not require to be fed by electric energy, hence it excludes by design any interference with electric fields typical of the railway environment. And above all, it is a modular system that can be further developed in terms of functions and predictive features”. 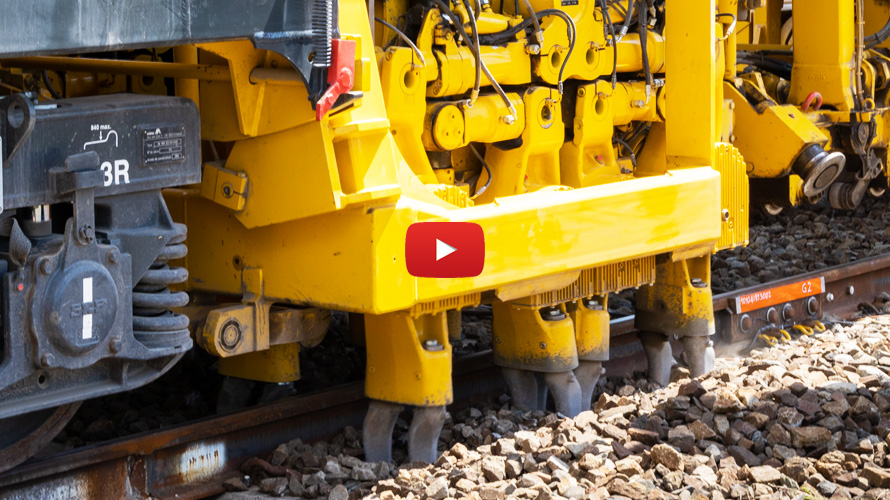