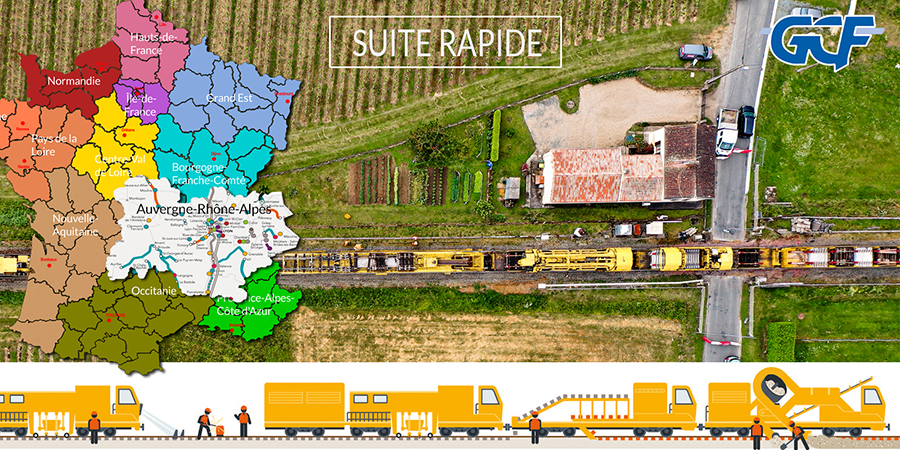 Suite Rapide at work in Auvergne Rhône-Alpes where it will renew about 70 km of French railway in four months. Three sites will be operating on various sections of two important railway lines, 905.000 Lyon – Marseille and 908 000 Valence - Moirans.

The high-efficiency renewal train Matisa P95 opened the works of GCF – Transalp Renouvellement’s “moving factory”, Monday August 1st. In the first of the three sites, along Grenoble - Saint Egrèves section of line 905.000, it is fully replacing the tracks and sleepers for a length of about 10 km, while, in sequence, Matisa C752C ballast cleaner will also restore the screed for a railway segment of about 3 km.

Double Suite Rapide site instead, will restore 908.000 Valence – Moirans, in the sections of Drôme and Isère, line characterised by a railway platform that alternates sections of single track to sections of double track. Here, along Saint Paul Les Romans – Moirans section, Suite Rapide will deliver 12,542 km of line with new sleepers and tracks and 26,952 km of line along which the screed will also be fully restored. Total renewal of the entire section instead, planned for third site along Valence - Saint Hilaire-Saint Nazaire section, with the aim to deliver to SNCF, 17,350 km of line with restored screed, tracks and sleepers.

The lines restored by Suite Rapide feature similar technical and environmental characteristics. Both lines (905.000 and 908.000) are electrified at 25,000 V and with maximum speed allowed of 160 km/h crossing Auvergne Rhône-Alpes Region (the second French region in terms of PIL relevance), with sections that go through numerous inhabited centres and consequently, crossed by many stations and level crossings, many lacking the lock switch.

The Safety and Protection Plan foresees operational and conduct codes to minimize the impact of the works in the stations and along the passenger platforms, on travellers, and to prevent any risks near the level crossings.

Similarly, binding and additional risk mitigation measures are foreseen for railway renewal operations that concern many industrial and production areas considered “Seveso sites” for the hazard posed by the processed materials (mainly present in Valence and Grenoble), and for works that will performed in protected areas around water collection basins (five along the sections of Suite Rapide site) and within natural areas considered Natural Areas of Ecological, Fauna and Flora interest (ZNIEFF).

The three yards for the parking and maintenance of the main high-efficiency operating machines used by Suite Rapide and for the storing of new and waste materials used for the railway renewal are located in Portes-Les-Valence, Saint Martin le Vinoux and Ternay.
Finally, additional parking and maintenance areas of “minor” railway machines were set up in Tullins, Romans, Saint Marcellin, Buisserate.

The works of the three Suite Rapide sites will be concluded in early December.

Meanwhile, in the north, in Île-de-France region, a second GCF-Transalp’s ballast cleaner Matisa C75, continues the works in ETF site that involve the section between Bretigny-sur-Orges and Etampes stations, along line 570.000 Paris-Bordeaux.

The railway renewal works involve track 2 of a high-traffic platform that features 4 tracks and are performed during the night without interrupting the trains’ circulation on the adjacent track. In addition to the C75, a tamping machine Matisa B45. Scope of the works: restoring 18,536 metres of track to reactivate 80 km/h transit. The works will be concluded in early September.