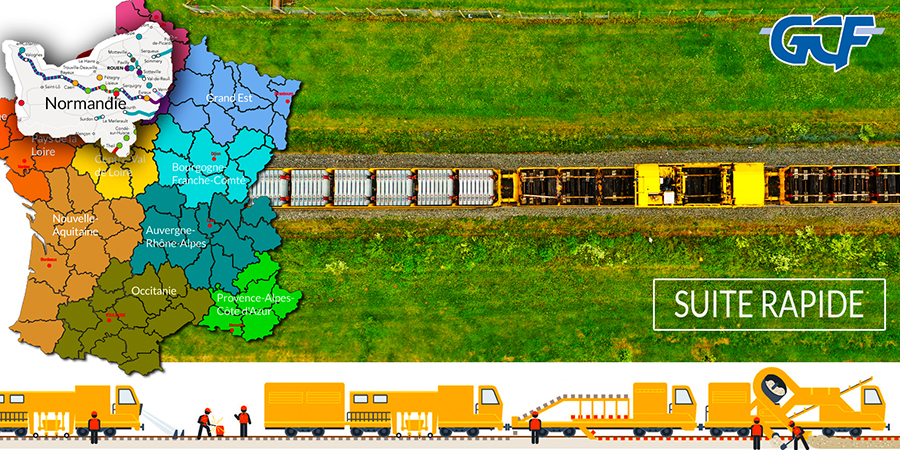 The preliminary phases for Suite Rapide site have begun in Normandy, that has the purpose to restore by May, an additional 60 km of line 340 000 Paris Saint Lazare - Le Havre between Motteville and St. Pierre du Vauvray. A site that will combine the usual production efficiency with extra efforts to respect the environment and recycle the outdated line components.

GCF-Transalp has been involved in double tasks in recent weeks.
A “hors suite” site that, along Arras – St Pol section, restored over 13,600 metres of line thanks to the work of a Matisa C75 combined to a tamping machine B45, now working at the restoring site of Creil station. In addition, Bordeaux site was completed in mid-January and delivered to SNFC over 54 km of restored and renewed railway line.

From Bordeaux, the renewal train P95 and tamping machine C75-2C, accompanied by their relative convoys and other high-efficiency machines, moved North to reach in the past days, Soquence base, in the Seine-Maritime department, where last summer Suite Rapide fully restored the section between Motteville and Harfleur stations, about 55 km from the super important line that connects the capital to Le Havre, second commercial port of France.

In that geographic area between the extensive bends of the Seine, featuring natural parks and precious forests alternated by busy industrial and production areas, Suite Rapide will articulate its activity in various phases that will concern three main segments of railway line: Maronne - Motteville, St Pierre du Vauvray - Oissel and Oissel - Sotteville. The works that will be carried out at night when the railway traffic is suspended, will fully restore the line by replacing the tracks using 60 kg sleepers and ballast works on almost the entire line.

There are many issues posed by the line being restored that, as usual, were subject to a meticulous preliminary survey in order to draw up the “Detailed safety and health protection plan”, that - for each work and situation - provides the guidelines to strictly follow to minimize risk factors.

In addition to the presence of level crossings, viaducts, stations and passenger platforms along the tracks involved by the works – elements that usually foresee routine measures tested over the years – particular and specific measures were instead adopted for the crossings of “Seveso sites”. All Suite Rapide operators have been trained to work on these areas safely (over thirty), where the tracks being restored are located near industrial plants that use materials and products with high explosion, fire, airborne hazards, with the consequent risk to pollute the soil, the water tables and air.

For Suite Rapide, environmental protection involves not only the mitigation of risk and prevention of environmental incidents, but also focuses more and more during the railway renewal phase, on the recovery and recycling of the old infrastructure.

“Specific and extra attention – explains Sabino Carbone from GCF’s French management office – is being paid by SNCF and consequently by us, in order to recover old building elements of the tracks: rails, joints, bolts, nuts, sleepers and gravel, in order to allow SNCF to easily recover and recycle materials”.

The French railways, which have been involved for many years in restoring the railway network, developed over time a peculiar commitment towards protecting the environment and, in line with this concept, towards the massive recovering of the “outdated” components of the old lines.
Every year – as recently stated in a “France TV” show recorded in GCF-Transalp’s Suite Rapide site in Bordeaux- over 2.6 million tons of waste are picked up from the railway network. In 2020, about 40% of these materials were recycled and only 10% of these components cannot be recovered. For this reason, SNFC opened in Beaune and Côte d'Or, its first railway recycling plants with the aim to recycle 100% of the materials by 2025.
“An ambitious goal – underscores GCF France - that we are focusing on pursuing and reaching for the tasks of our competence, further implementing our collection and separation systems of railway waste, before sending it to the recycling centres”.

Specific teams of workers collect the dismantled line fitting components and separate iron (caps, bolts, nuts, washers) from plastic components, as well as insulating materials between tracks and sleepers. With regards to the old tracks – already cut through gas blowpipe in segments of 36 or 18 metres at the line border - once carried to the yard, they are further divided in order to be re-used in building the railway sections.

Lastly, the intervention of third companies allows working old sleepers (in wood or usually of two-block type with two cement heads joined by an iron bar), recovering the best preserved and crushing the others to recover the cement for building or road works. Similarly, the waste soil and the gravel removed by the ballast cleaning machine are sifted and cleaned in order to re-use the material in good status for the screed and send the most friable material, no longer suitable for the railway network, for building works.