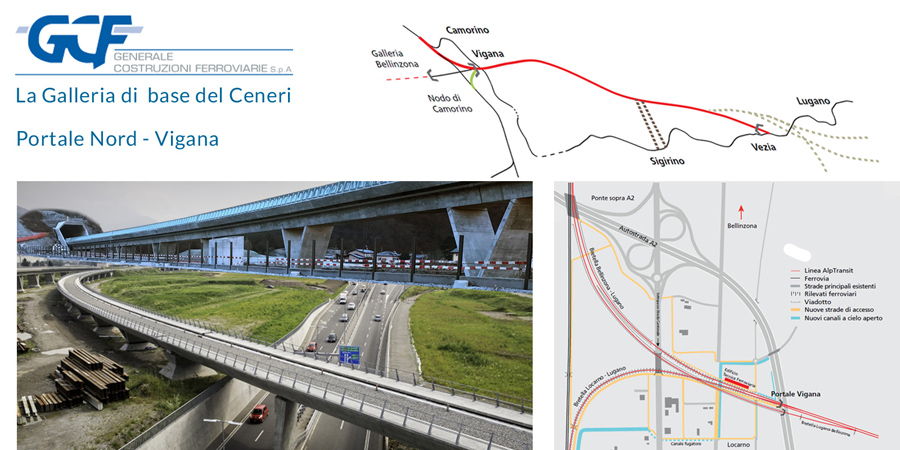 GCF starts work on the Ceneri Base Tunnel

With the onset of construction work for IP Camorino, GCF S.p.A. - Generale Costruzioni Ferroviarie enters the main railway construction stage of the Monte Ceneri Base Tunnel.
This is the final stage in the "project of the century": the construction of a railway crossing the Alps to connect northern and southern Europe.
The Ceneri Base Tunnel between Bellinzona and Lugano is the second major work envisaged by TransAlp within the scope of the NRLA project, the New Rail Link through the Alps following the Gotthard Base Tunnel (57 km - the longest railway tunnel in the world).

Just as the new Gotthard line came into full operational capacity on Sunday 11 December with the new timetables for high-capacity freight trains and high-speed passenger trains, in Camorino GCF launched its railway technology project. The €90 million batch awarded by TransAlp will involve significant involvement of plant, personnel and innovative technologies.
“We are setting up the installation depot in Camorino, near the Vigana North Portal,” explains the GCF designer, Eng. Eleonora Gasperini, “a full-scale logistics base for handling goods with workshops, warehouses and storage areas, as well as premises for pre-assembly of superstructure components, a concrete batching plant and a control/command centre to monitor site traffic. There are also offices, accommodation, canteens and facilities for workers and technicians - a kind of village capable of hosting more than 150 people involved in this great project for over a year."

All plant and the village itself will be fully operational in a couple of months and connected to the Ceneri Tunnel by an extensive rail transport logistics network: a system of about 5 kilometres of sidings and 24 points that will allow construction trains, waggons and materials to circulate, as well as the specialized high-performance machinery that will be used for the railway superstructures.

Railway superstructure work on the Ceneri Base Tunnel and the new above-ground routes to the North will begin in July 2017 and are due to be completed within one year. They will proceed from the Vigana North Portal to the Vezia South Portal and then terminate with the superstructure for the above-ground lines on the two viaducts and the Lugano-Locarno spur-line link.

“The railway superstructure for the two single track sections of the Ceneri Base Tunnel,” says Engineer Gasperini,  “will be implemented on a concrete platform and LVT (Low Vibration Track) blocks, as already utilised for the Gotthard Tunnel. The high productivity of the construction train, alongside the innovative concrete supply and casting system developed for this task, means we expect to achieve extremely efficient logistics management. Once superstructure work is completed, the tasks involved in the Technology Batch will begin to complete the basic tunnel and equip it with all necessary utilities: contact line, power, telecommunications and radio, fire protection and ventilation...”

North of Vigana, on the other hand, the superstructure for two single track viaducts over the A2 motorway and Lugano-Locarno spur-line link will proceed with the laying of tracks on a ballast railbed using the “Meccanica" construction train GCF designed and built in order to install high-speed lines in Italy.

“We are very proud,” said Edoardo Rossi, President of GCF - Generale Costruzioni Ferroviarie, “to be involved in the NRLA project. We will work with the utmost responsibility and energy on the railway technology batch for the Ceneri Base Tunnel. It is the last important task in connecting northern and southern Europe with a single high speed-high capacity flat line. There are enormous expectations, especially for the objective of transferring most road freight to the railway system which, not less importantly, will also help reduce CO2 emissions. Railway technology Made in Italy is held in high regard throughout Europe. We are determined to uphold these expectations.“

The GCF site: Data and graphics