Ance 2018: Made in Italy continues to grow 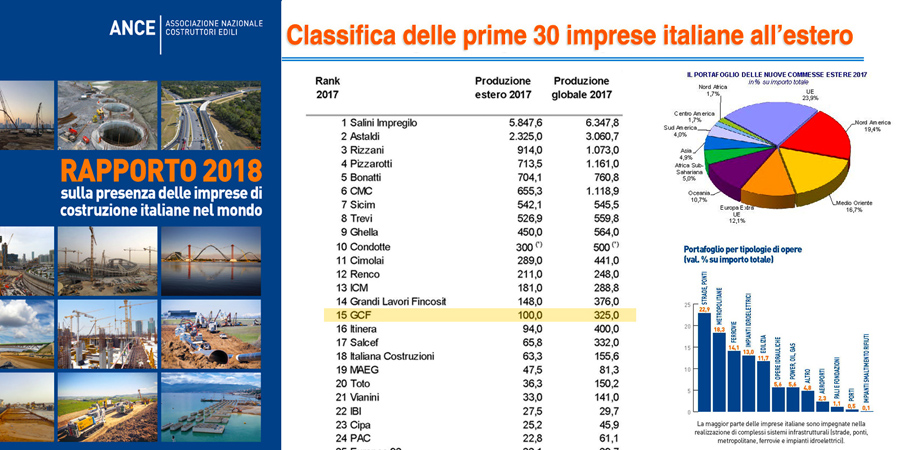 The first railway builder to represent Italy abroad. GCF takes fifteenth place overall in the 2018 national ranking drawn up by Ance in relation to penetration by Italian construction companies into world markets. GCF consolidates its role of excellence as a specialist in railway systems and a driving force behind economic development.

Presented on Monday at the Foreign Ministry by President Buia and Vice President Ghella – in the presence of more than 40 foreign embassies – the Ance 2018 Report highlights for the thirteenth consecutive year the great vitality of Italian construction companies on international markets: 46 companies representing around one-third of all international contracts signed by Italian companies.
Impressive data, as highlighted in the opening address by the Minister of Foreign Affairs and the International Cooperation Enzo Moavero Milanesi, who acknowledged for construction companies “a role of important responsibility in contributing to economic growth and job creation.”

The need to reposition in more stable OECD markets (more than half of the orders were obtained in this sphere) and G-20 countries not only did not slow down the growth trend – with an annual average of 9.3% – but, rather, 2017 also saw a strong increase in the acquisitions of new orders: 298 new projects for a total value of 17.4 billion euros, 3.5 billion more than the 2007-2017 average.

The role of construction companies

As far as construction company rankings go – with GCF firmly consolidated in 15th place (and first among the specialized railway construction companies) – the ratio between domestic and international turnover is significant.
Penetration by Made in Italy into world markets and growth in international orders and sites is reflected in the increase in the percentage share of foreign sales with reference to value of production: for larger companies – those with more than 500 million euros in turnover per year – international sales on average represent 82.7% of value, with peaks of over 90%.
For companies with turnover of between 251 and 500 million euros, international business accounts for about 40% of total turnover and, above all, is a fundamental factor behind dimensional growth. It is no coincidence that more and more companies are investing outside national boundaries and the role of international operations is constantly increasing, even for small and medium-sized enterprises with turnover of less than 100 million euros.

“The growth in foreign sales,” said the Vice President of Ance, Giandomenico Ghella, “has offset the steady decline in national sales of 3.3% per year. This means that Italian companies – which boast all the qualities and skills needed for success on highly complex and competitive international markets – need just one thing at home: an effective and decisive policy to simplify the rules and reduce administrative time, speed up procedures and accelerate spending.” 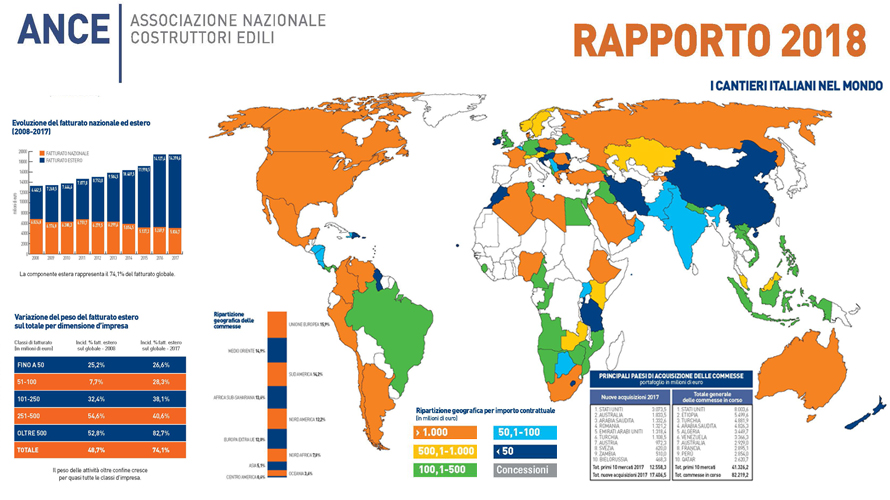