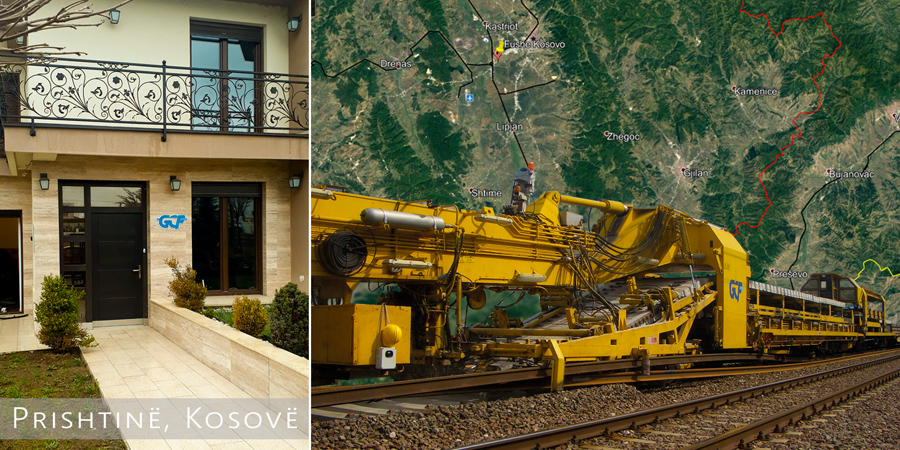 In Pristina, the Kosovo branch of Rossi Group

The new foreign office of Rossi Group opened in Pristina. The construction of GCF’s headquarters in the capital of Kosovo is the first activity following the signing of the contract pursuant to which Infrakos (Kosovo Railways Infrastructure: railway operator) entrusted to Generale Costruzioni Ferroviarie, the task to restore a strategic section of the main railway line of the Country.

The ceremony of signing the contract during early February, was welcomed as a “day of celebrations for Kosovo” by the Prime Minister Tamush Haradinaji.

Indeed, the forthcoming beginning of the restoration works of Fushë Kosovë - Hani i Elezit line by GCF marked the change of Kosovo’s transport policy and the implementation of the actions of the European Union to integrate the Balkan Region in the Pan European exchange and economic cooperation.

Kosovo’s railway restoration project – which GCF lot belongs to – falls in the overall scope of the “Rail Route 10” project that – co-financed with loans for 39.9 millions by Bers and 42 millions by Bei – will provide the Balkan region with an efficient railway corridor able to move goods from the Greek port of Piraeus (in which significant Chinese investments were made) until the heart of Europe, without being forced to “go around” the Balkans, but following a natural North-South transit axis.

“The opening and organization of the Kosovo branch -underscores Edoardo Rossi, GCF’s President – is a fundamental preliminary act that will allow us to manage this important contract at best. The assignment of the first lot, the most important in terms of length and the most complex due to the design characteristics, rewards our company and execution quality that we ensured in all our Italian and foreign construction sites. We are honoured of the fact that the politicians and administrators in Kosovo are expecting important economic, social and environmental spin-offs from our work”.

On the North-South Belgrade- Skopje axis, the works of lot 1 assigned to GCF foresee the total restoration of a section of 68 km of tracks from the station of Pristina capital until Hani I Elezit, city at the border with Macedonia, along a fairly complex path characterized by the presence of 73 junctions, 33 bridges, an underpass and 7 tunnels. New structure and electrification will allow to increase the line’s speed from the current, modest 70 km/ hour up to 150 km/hour.

Other two lots will complete the Kosovo’s railway line, continuing the restoration works for 35 km from Fushë Kosovë to Mitrovicë (lot 2) and with lot 3, for the remaining 42 km until the border with Serbia.
For additional information: With GCF, Kosovo starts the modernization works of the railway network.

For additional information: With GCF, Kosovo starts the modernization works of the railway network.