Suite Rapide at full speed in 2021 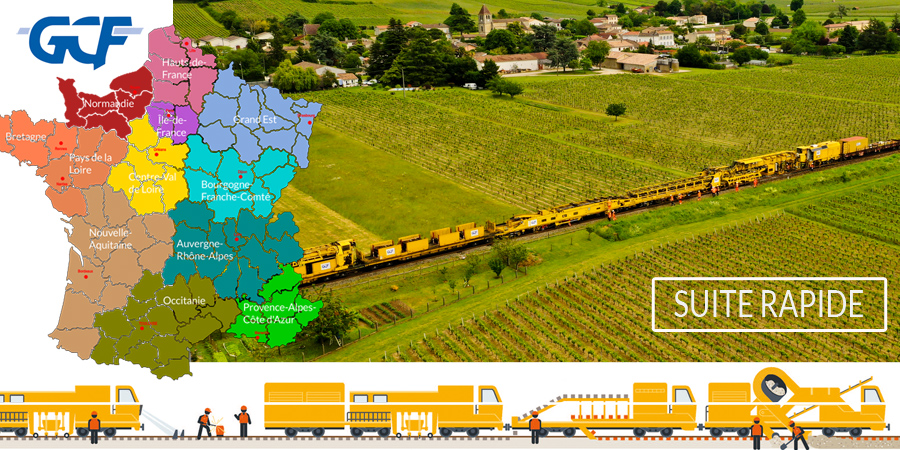 Six big rapid sites in 5 French regions. The 2021 French calendar that GCF - Generale Costruzioni Ferroviarie is about to start with Transalp Renouvellement is characterised by many commitments, with Suite Rapide mobile workshop involved in the full restoration of some of the key French railway sections.

In view of the entity of the works that will fully replace all track components (screed, sleepers and rail), SNCF Réseau suspended the railway traffic “simultaneously” from 9:00 p.m. to 5:00 a.m., and eliminated some services between Marseille and Toulon at late evening and early morning, from Monday night to Saturday morning.
The rapidity of the activity that “thanks to the involvement of a modern workshop train - as underscored in the press releases and notices to the population issued by SNCF - allows to renew 800 metres of track instead of 150 metres that would be obtained from traditional methods” will allow to terminate the railway maintenance works in March.

“The works will be executed from west to east - explains Sabino Carbone from GCF France management office - paying particular attention to all measure to mitigate risks implemented in view of the fact that the entire section being worked on, is considered a “blue area”, meaning an area exposed to high electric hazard since the catenary is located at a height less than 5 metres from the track”.

In addition to ordinary safety measures, generally implemented in view of the objective risks present at Suite Rapide high-production sites, all exceptional health measures will be also applied in 2021 to mitigate the risk of contagion from Covid-19, such as “barrier gestures” and obligation to wear masks.

The French 2021 calendar of GCF-Transalp will continue with the Suite Rapide sites already scheduled by SNCF to restore numerous sections of the national railway network. In particular, Suite Rapide will work on section Moulins sur Allier - Saint-Germain-des-Fossés of line 750 000 in Auvergne - Rhone-Alps, on sections Lens - Béthune and Arras - Lens of line 301 000 in Upper France and, from summer 2021, on section Motteville - Harfleur of line 340 000 in Normandy, in Le Havre area and, in New Aquitaine, on line 655 000 section Talence-Médoquine - Gazinet-Cestas east of Bordeaux.