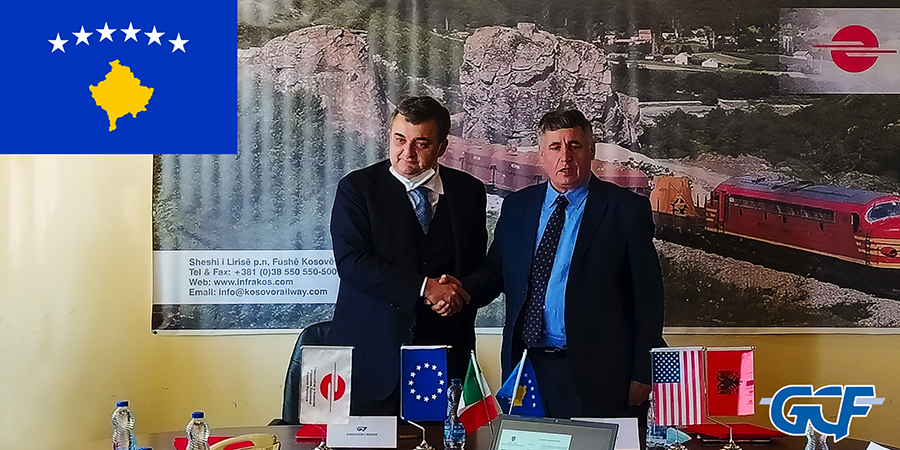 Announced last September, it is now official with the solemn signature of the contract. The Rail Route 10 project formally launches the second renewal lot of the main railway network of Kosovo. GCF, Rossi Group’s railway firm that has been working in Kosovo for 2 years, will have the task to rebuild the second section between Fushë Kosovë and Mitrovicë and extend it to the European perimeter.

In Fushë Kosovë, at the headquarters of Kosovo Railways Infrastructure, the CEO of Infrakos J.S.C., Zymer Zekaj, and the President of Generale Costruzioni Ferroviarie, Edoardo Rossi, sealed the official contract with a formal signature and hand shake, among the applauses of the representatives of the Kosovan government, the European Bank for Reconstruction and Development (EBRD), the Italian ambassador in Kosovo, Antonello De Riu, and the managers of Infrakos and GCF.

Infrakos CEO, Zymer Zekay, underscored the importance of this moment for the Rail Route 10 Project, turning point to bring Kosovo closer to Europe, who thanked international financial institutions for supporting a project that is globally considered vital for the development of the Country stating “a goal that we and the client hope to conclude as soon as possible and at best, in terms of building quality”.

In the name of the government of the Republic of Kosovo, the Deputy Minister of the territory and infrastructures Hysen Durmishi, praised the beginning of the second railway renewal phase, confirming the commitment of the government to support the restoring of the existing lines and open new corridors towards Albania through Pristina-Durres corridor.

“The awarding of the second lot to GCF – underscored Edoardo Rossi, President of Generale Costruzioni Ferroviarie in his thanking speech - makes us proud and above all pushes us to ensure our best production efforts. We are truly proud that our work and experience can contribute to the development and overall growth of this region according to European standards”.

It foresees the substantial reconstruction of 148 km of railway that cross the entire country of Kosovo from North to South, respecting the requirements of the technical rules of inter-operability and European standards to improve the safety of railway traffic, with the aim to improve passengers’ conditions, increase the trains’ travelling speed and number of trains per day, and, lastly, to support the development of the economy of the Country and the entire Balkan area.

Since February 2019, GCF has been executing the first lot of works – completed by over 60% at the moment – that, for an amount of 78 million Euros, foresees the re-building of the 67 km section between Fushë Kosovë and Hani i Elezit, towards the Macedonian border.

Lot 2, financed with 48 million Euros, foresees the total remaking, in 15 months, of the section between Fushë Kosovë and Mitrovicë: 34.4 km of main railway line and 9.1 km of track and junctions in stations, in addition to 18 km of road network parallel and transversal to the line (service roads or roads crossed by 32 level crossings).

The third lot will complete the project with 46 km between Mitrovicë and Lesak to the North, on the border with Serbia.

The restoring of railway Rail Route 10 has started in Kosovo

Kosovo sets out to modernize its railway network with GCF